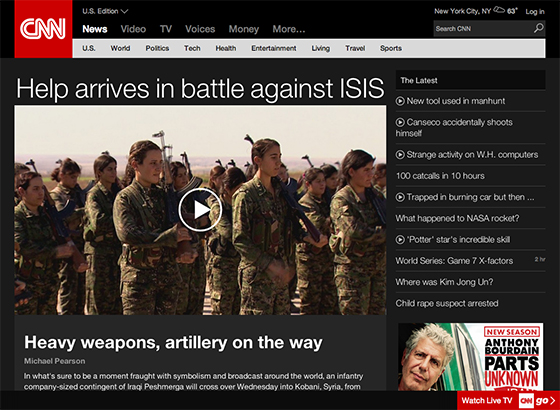 CNN has quietly made what appears to be a beta version of a new website live.

The site, which is located at http://beta.next.cnn.com, features a cleaner, typography heavy design.

In August 2013, CNN.com announced plans to overhaul its website and showcased previews that included moving the network logo to a red square and adding dark blue shades as accents. The mockups released at the time also featured large, blurred backgrounds on many pages.

This new design retains the CNN-in-a-box treatment, but uses black, gray and white instead of the blue.

The background photo concept has been retained on some section fronts and story pages, often featuring what look like stock photographs.

Notably, the homepage also boasts larger but thinner typography for the module featuring a rotating selection of top stories.

Video also takes a more prominent place on the new design — many of the top story images are actually embedded videos, while the list of text-only headlines down the right side of the page feature video icons.

Meanwhile, story pages feature clearer body text treatment but also include some boxes of additional content and ads that results in a rather haphazard look. Story pages also retain the “story highlights” bullet lists that CNN introduced years ago — an idea that was rather unique at the time.