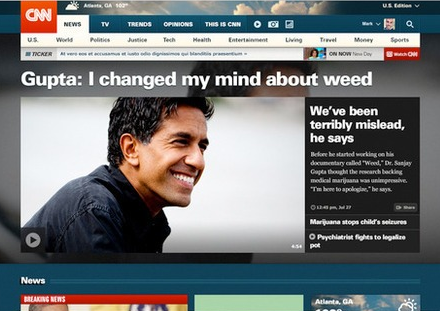 CNN.com will get a new look come this November.

A private beta of the website went live today, with a public beta site coming online in September.

The network reportedly is investing $15 million in the new site.

Plans call for the website to shift colors throughout the day and changing to a red color scheme during breaking news. The “everyday” colors will also be toned down, shifting from the bold CNN red to blues, grays and off white tones.

The homepage will include, according to sample images distributed at a press event Wednesday, a large showcase area for major stories with a blurred background photo that expands across the entire window. Other content is included in a tiled masonry format below.

The new site will also be responsive, meaning it will change layout automatically depending on the size of the device being used — a particularly helpful feature for folks on mobile devices who don’t have or prefer not to use the CNN app.

The new site is more than just window dressing, however, reports Mashable. CNN is developing a completely new backend as well that will allow staffers to publish content across multiple channels, including social media. Plans also call from an API (application programming interface) that will allow third party developers to leverage content and feeds from the site in their own apps and services.

CNN.com revamped its homepage in April, shortly after Jeff Zucker joined the network as president. That redesign, however, didn’t extend to other pages and was, structurally, very similar to the previous version.

It is interesting that CNN has opted to move to a darker color scheme, steering away from its trademark red color. While the realtime breaking news color scheme is an interesting concept, one wonders how overused that might become.

The new CNN site will come right on the heels of a new NBCNews.com.