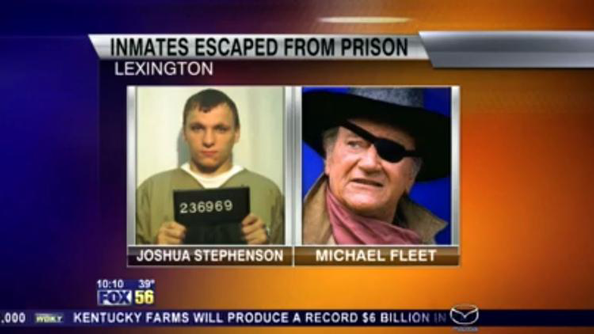 WDKY-TV, the Fox affiliate in Lexington, Ken., resurrected a Hollywood legend who died over three decades ago and “accused” him of breaking out of a local prison.

The station was covering the prison break and intended to show viewers the headshots of two prisoners accused of being involved in the alleged plot. However, the station ended up airing a graphic that featured on of the inmates and a stock shot of John Wayne.

According to the L.A. Times, the station’s explanation for the error is that the photo of late actor Wayne is the default placeholder for mugshots in its graphics system. Somehow the actual photo of the alleged escapee didn’t get uploaded, resulting in the Wayne photo making it to air.

While the Wayne placeholder photo is likely the result of an inside joke or just someone being clever, it’s also an accident waiting to happen.

Let’s say the station had opted to use a brightly colored box (or just left the space blank) in its graphic templates — the glaring nature of those approaches make it easy to spot a missing graphic even during a quick glance at the graphics system — or even caught in a preview monitor in the control room before being broadcast.

Using a photo of a person, however, obviously makes it much easier for your brain to simply overlook the missing image.

Back in my newspaper days, I had an editor who always emphasized that “nothing should go into the computer you don’t want to make it in the paper or on the website.” The same is true for TV.

Of course, that hasn’t stopped volumes of funny, inaccurate and even offensive “placeholder” text or images from making it into print or on air — and you would think people would have learned their lesson by now.

In fairness, mistakes do happen and for some time NewscastStudio’s newsletter template had placeholder text that read “Headline goes here” — until a newsletter was sent out with that text a few years back. It’s since been replaced with “X”s.

And, in the case of WDKY-TV, this error probably won’t cause any harm or offended viewers, but it sure does look sloppy, so take this opportunity see if your graphics system has any placeholder images or text that could cause a similar issue.