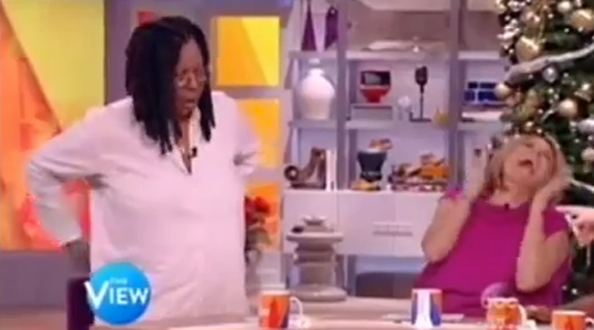 The Internet has been abuzz with reports that “View” host Whoopi Goldberg broke wind during a segment on Wednesday’s show.

Shortly after the show came back from a break, guest cohost Ashanti was discussing why she opts out of getting a flu shot when a muffled sound could be heard.

Goldberg excused herself and set the entire cast into hysterics, with her cohosts fanning the “odor” with scripts and blaming Goldberg’s apparent gas on breakfast burritos (Ashanti took the opportunity to blame the “flatulence” on the flu shot Goldberg got).

However, Goldberg has since come out and said she was actually making a joke about the stinger sound effect used when the show’s bug transitions into the “Hot Topics” fire-y logo — a sound that is supposed to sound something like a sizzle. The sound — whatever it was — did, in fact, accompany the animation.

You might remember that back in 2011, Goldberg apparently passed gas during a “View” interview with actress Claire Danes — though some reports are now circulating saying that, too, was a joke (about what, exactly, isn’t clear).

So, sound effect or fart? Watch below:

And, if you’d like to take a nice trip down the memory lane of farting, here’s the 2011 video clip.

FWIW, Wikipedia claims that Goldberg took her stage name (her real name is Caryn Johnson) from the fact that she’s apparently rather gassy.