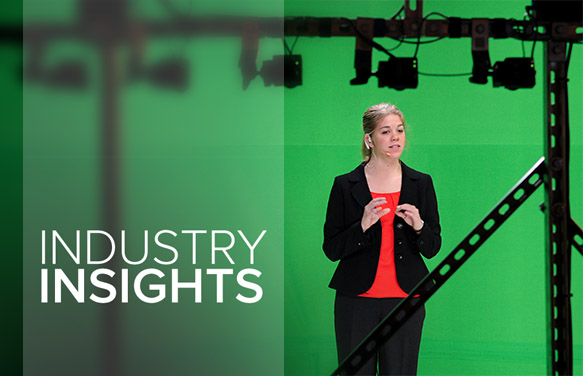 Virtual sets can be seen across the air in Europe and Asia, but are they ready for the American viewer?

This question continues to plague designers and station management, as they look for new ways to do more with less.

ITV News uses them with success while CNN uses it as a presentation gimmick, leaving the many to wonder what’s the best use of this evolving technology. Let’s see what our panel of industry experts had to say about virtual sets and the future of augmented reality in newscasts…

This week’s question posed to the panel:

Virtual sets continue to be heralded as ‘the future of scenic design,’ but adoption rates in the U.S. continues to be fairly low, typically by stations with lower budgets. Is this just a fad? Is it something stations should get behind? Why now?

“This question has plagued designers and Production for years. There is a silver lining in melding the two worlds, with the continued interest in large electronics as scenic elements, it has enabled markets to blend graphics seamlessly into the built world. Utilizing electronics allows the flexibility, which is what the virtual world was supposed to be about. There is a need for some type of inclusion that wont threaten the balance of design.”

“The priorities of a station or network change quickly over time. I’ve helped a number of clients who were heavily invested in virtual sets move back to hard sets. The main reason that they gave for the move was the fact that the virtual system limited what they could do. There is also, I think, a very good argument to be made against virtual sets based purely on the aesthetics. I personally have a problem with people walking around an environment in which they do not cast a natural shadow. I would not count out the technology in the long run as it continues to improve. However, I don’t think we have reached a tipping point in the U.S.”

“Trackless systems are reasonably priced but we at FX are still advising stations to build hard anchor and weather sets, and use the virtual system and design for sports, entertainment, interviews and multi-purpose areas. Good news is that the cost of the virtual system will be about equal to building those additional franchise areas and give them more flexibility and space in their studios.

If the station is budget challenged and the choice is between virtual and real, they will definitely have more set options available if they choose Virtual.  With the cost of materials, labor, and shipping continuing to rise and most stations’ scenic budgets going down, we feel it is inevitable that within the next 10 years most stations will have virtual sets on air. We emphasize the design, as bad designs on virtual sets are recognized by viewers and lead to less trust and believability in the newscast.”

“You will see a change in the tide with regard to virtual sets and greater adoption rates across all markets. Many stations will dip their feet into the virtual waters with the integration of augmented reality components into their newscasts rather than making the full leap of switching over to a virtual main set. Although the mass switch-over may not be immediate, the fact is that the technology has reached a level of realism that the viewer will accept.”

“When Team DDG first delved into virtual in the early 90’s it was heralded as ‘the future of scenic design,’ but so far, at least in the US, it’s never lived up to the claim. We learned early on that there were many cultural differences between our clients, broadcasters, and this niche of the computer industry. Many early projects were fraught with integration and scheduling difficulties.

The cost beyond the entry level systems, which are fairly limited, was, and continues to be, a factor. Plus, the set libraries that are included with most virtual systems are really not meant for prime-time in the US, and the claim some virtual manufacturers have made that a stations in-house graphic department, or hub, can create believable, architectural 3-D environments for the virtual platform is simply untrue. Bottom line is you’ll still have to hire a set design firm like Team DDG who knows how to design, optimize, and integrate their work into whatever virtual system you acquire.

All of the above issues have contributed to a healthy and justifiable skepticism in the US towards virtual.”

“I don’t think it’s a fad. The technology is getting better and more affordable. I think it works best when combined with real scenic elements and is used more for editorial support.”

“Virtual sets work best for programs or special venues with just one or two presenters, this keeps the technical glitches to a minimum.

Most USA news and sports casts are four person, with a multitude of camera angles, quick cut reaction shots, toss shots etc. Very challenging to accommodate this pace with virtual sets. We do see wider acceptance of virtual sets with our overseas clients. For example, one of our network clients in India had a need to produce 22 different shows in 3 studios. Two of the studios HAD to be virtual.”

Kyle Sanvictores of AKA Creative Group

“I don’t see them replacing real studios all together. I see augmented reality and the integration of virtual real time graphics as the real future. Virtual sets still look a little hokey in my opinion….and nothing can replace the tactility of a built environment no matter how good the renderings. News needs to come from a place of accessibility and I think built studios offer that.

Virtual studios are like watching the news AVATAR style. Its flashy and exciting at first because the technology is cool. But the same problem always surfaces, just because you can do something with a computer or the latest technology it doesn’t always mean you should. Built studios, graphics are part of story telling. Other than the economy of not building an actual space I don’t see it replacing studios all together any time soon.”

While some designers are a bit more bullish about virtual sets, many believe they work best when paired with a physical space. Combining allows the best of both worlds and provides grounding for the newscast.

As we’ve seen with elections and special events, virtual sets can work for one-off coverage, but in the daily cycle can become problematic. Computers do crash and green isn’t a very good color for a background.

As one designer said, “nothing can replace the tactility of a build environment.”

Our roundtable of industry leaders tackles the ever changing news day. With the hours of news and sports production rising, what considerations should stations be making in terms of sets and technology.

Plus, stay tuned for more insight from leaders in news music, motion graphics and lighting design.