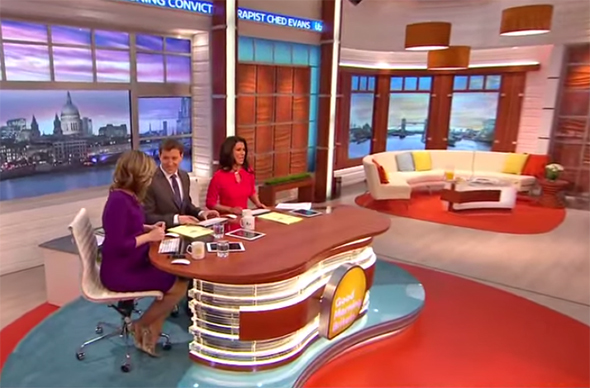 ITV’s “Good Morning Britain” tweaked its warm and inviting studio this week, along with a debuting a refined opening theme.

The largest change is seen camera center with a new curvy anchor desk, reminiscent of “Good Morning America’s.” The desk includes the shows logo front and center and has layers of acrylic with illuminated ribbons. The riser, which previously was the shape of the show’s logo, has been modified to match the new desk.

The smaller desk is cozier and pulls the talent closer together, while the old desk was a very large arc. The sets main interview area was also updated, as transoms were added to the fake window monitors and new covers were placed on the hanging lights.

The softer musical theme is a change from the shows previous sound.

The four note signature remains, but is now played with a piano instead of a brass instrument. The neutered theme looses some of its regal feeling, instead becoming almost too playful.

The show did not update its graphics package or opening titles.