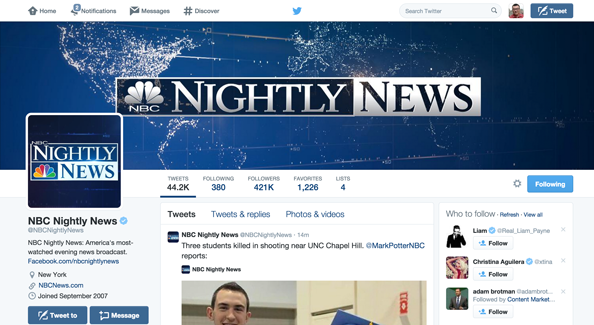 In addition to removing Brian Williams‘ name from the “NBC Nightly News” opening sequence, NBC News has also removed his name from the graphics used on its social media profiles on at least three major services. NBC swapped out the large graphic that runs across the show’s Twitter, Facebook and Google+ pages with a new world map graphic without Williams’ name or image appearing in it.

It’s interesting to note the network appears to have uploaded the most recent version of its Facebook cover photo around 7:50 p.m. eastern time, according to the timestamp on the image.

The change didn’t go unnoticed by social media users — the new photo also includes a slew of comments, many of them shaming NBC for removing Williams’ name from the logo.

In addition to the large banners, the network also exchanged the square shaped profile photo with a non-Brian Williams version of the show’s logo.

It’s worth noting that Brian Williams name wasn’t removed from the page title on Facebook — possibly due to the fact that Facebook limits the number of times page admins can change the name.