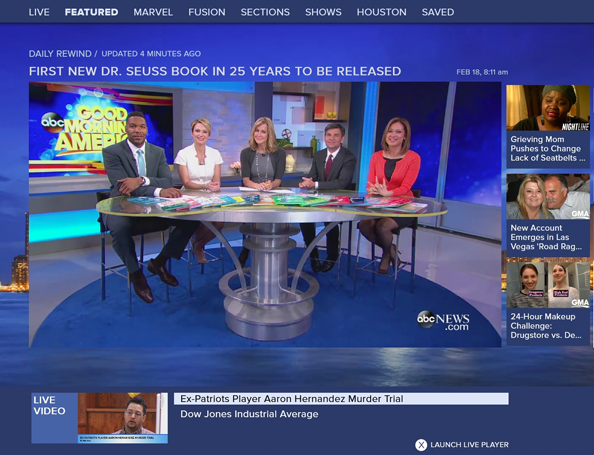 ABC News has launched an app for the Xbox One platform.

The app, which is the first U.S. news application on the gaming console, according to the network’s announcement, the ABC News app will offer access to multiple simultaneous streams of live video as well as on-demand content, entertainment news, original programming and highlights from ABC News programs.

ABC will also leverage its broadcast rights for the Oscars by stocking it with clips and live video from its coverage this weekend.

“The app for Xbox One is a major step forward in our efforts to develop new creative forms of storytelling and put ABC News everywhere people get their news and information” said ABC News vice president of digital Colby Smith in a statement. ”The ability to choose from multiple live streams, especially during breaking news and special events, will provide an unparalleled viewing experience for the audience.”

The allows users to watch ABC video streams or other content in split-screen format while also playing a game, watching another television channel or video chatting with friends.

ABC will offer up to five live streams at any one time, including its 24/7 digital offering. Content from its owned and operation stations will also be available.

In addition, curated “editions” will be available in the morning, evening and on weekends.