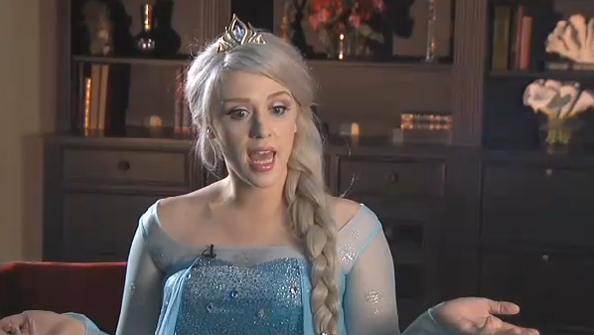 Last week a Kentucky station aired the mug shot of the main character of Disney’s “Frozen,” Elsa, after a local police chief “issued” a warrant for her arrest (the crime: bringing winter weather to the area) — and now a Charleston, S.C. station has actually interviewed her.

The station, WCIV-TV, is, not surprisingly, an ABC affiliate.

The station aired an interview with someone dressed up as Elsa after the police chief of nearby Hanahan, S.C., arrested her for bringing her wintery wrath to the area and breaking her “no ice” promise.

WCIV-TV gave the “story” the full treatment, including an anchor tossing to a reporter for a live in-studio intro to a package that included video and photographs of Elsa and her arrest, as well as a sit-down interview with her — complete with cold, icy side lighting (notably, we’re guessing more thought was put into this lighting setup than most typical news interviews).

Creative storytelling or corporate synergy at work? We’re not sure, but somewhere Peter Jennings is rolling his eyes — while Walt Disney is chuckling.