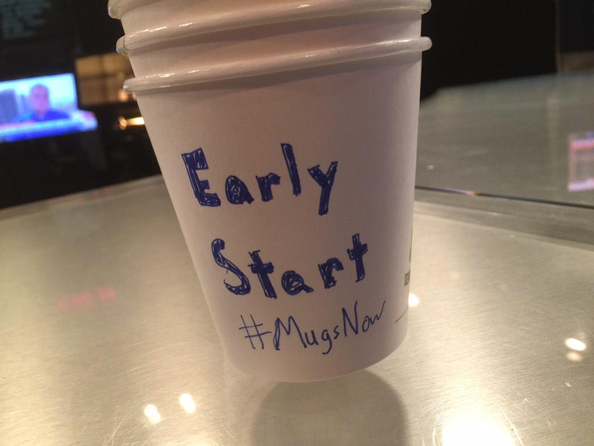 The under-appreciated CNN anchor can’t even get a coffee mug with his show’s name on it.

Berman, who has been with “Early Start” for much of its turbulent time on air and currently helms the show with Christine Romans, noticed CNN senior media correspondent Brian Stelter show off his show’s new “Reliable Sources” coffee mugs on Instagram.

That apparently got Berman thinking: “If he gets them, why not us?”

So, Berman has started a campaign he calls “Mugs Now” and, to promote it, hand-drew the show name on a cup and posted a photo of it on Twitter:

For the record, “Early Start” draws about 180,000 total viewers during each of its five daily airings, while the once-a-week “Reliable Sources” hovers around half of that.

So, if CNN’s looking at things from a pure mug-to-eyeball ratio, investing in some mugs for Berman would certainly be smart move (hint to CNN: You can pick up a few custom mugs at about 15 bucks a pop over at CafePress).

In other mug related news, “NBC Nightly News” did a pretty good job removing Brian Williams’ name from its graphics and set, but did forget one place.