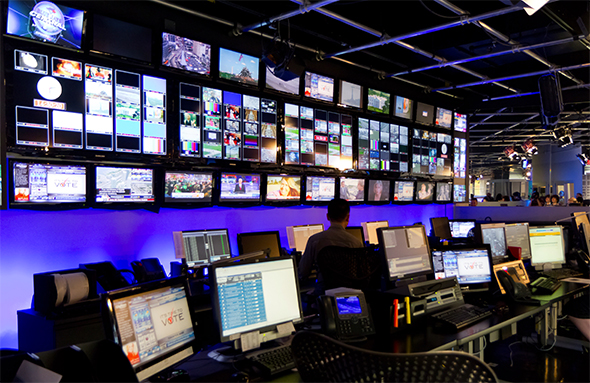 I often think about the qualities that make someone successful working in television, especially when paired with young production assistants who want to learn about the business. Talent for a particular craft, perhaps networking skills, a strong work ethic, or a deep knowledge of gear, techniques, and equipment must factor into the complex equation.

However as I’ve gotten older I think two more factors weigh heavily that are not often discussed: confidence and good client service.

Confidence is notoriously difficult to talk about.

We spend millions a year on self-help gurus and books. In reality I think the whole thing is pretty straight-forward. For starters confident people know when to remain silent and when to speak up. It takes time and experience to know which approach a situation warrants; I don’t always get it right myself. Years ago during the early days of Blu-ray (and my career), I did a video installation project. The client had captured footage and wanted to display it on HD TVs. However, she continually expressed concern. The video did not look as good on the TVs we would be using as it did in the edit studio.

I knew the reasons why but didn’t say anything. My default M.O. is to keep my mouth shut unless directly asked. However that approach didn’t work. I should have explained everything in a clear and concise manner. As such, the client lost confidence in the company’s ability to execute the project.

The world may be collapsing around them, but these individuals face adversity in a cool and collected manner. The importance of this cannot be overstated. The minute I hear panic in someone’s voice, I can reasonably deduce that they, in this moment, are not confident. This then helps guide my immediate decisions.

When I hear over headset a director losing their calm, I immediately know something’s up. My attention jumps to 110%. When a co-worker loses their cool, I mentally note they aren’t suited to high stress or highly ambiguous environments. They might need more training or a different position. When I lose my calm, I know I need to be better prepared and immediately address whatever is causing the consternation.

This leads to a third trait confident people share: they are always in control, especially of themselves. Insecure people tend towards drama — they either instigate it or spread it. Temper tantrums, hissy-fits, or blow-ups do not indicate a person is in control of themselves or their emotions. That’s never a good sign. A confident person also maintains control of their environment, wherever that is. On a shoot for a client, a co-worker told me a DP felt marginalized and started yelling, “I AM THE DP, I MAKE THE DECISIONS!” Clearly not in control of himself or the situation, the DP opened his mouth and had a temper tantrum. You could say he confidently struck out.

Arts programs talk a lot about art, but rarely mention the client service aspect. I think it’s just as important. One could argue it is an art unto itself. I’ve noticed what all seasoned professionals have in common is their excellent client service skills. Unfortunately, I was never taught the delicacies of client service and instead learned it the hard way.

In my 20s I programmed a moving light console for an event space in New York City. I acted as a sort of “light DJ” for high-end events, weddings, concerts, and private parties. The venue director came up to me asking about a problem she noticed. I was busy and the venue was loud — it was difficult to hear her — and I mumbled something while looking over the console. The next day I found out I had been fired.

She felt I had blown off her concern and ignored her, the antithesis of good client service. In my defense I was confused and unsure what she said but that didn’t matter. I should have taken more care to listen and address her issues. Just as I failed to allay my client’s fears regarding the video playback quality, my poor client service skills tripped me up. Nobody questioned my design abilities, experience, or work ethic. That didn’t get me fired; it never entered into the equation. My poor client service skills did however.

I still see young people constantly tripped up by these two important aspects of their job. They emphasize the latest gear or that they have the most training. They are the emphasis of artistry. They push, all the while missing the point. Clients must have confidence in your abilities and in you. Client service skills separate the pros from the amateurs. Without these two things, great art means little. Without these two things, we don’t have jobs.

Lance Darcy is a Lighting Director for The Lighting Design Group, based in New York City.