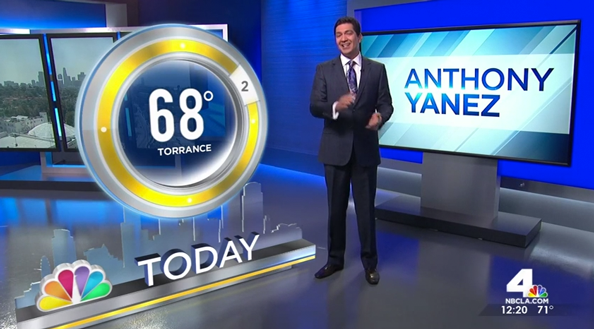 But things took a turn when Yanez took a short stroll past the monitors and walked behind a giant floating yellow ring. 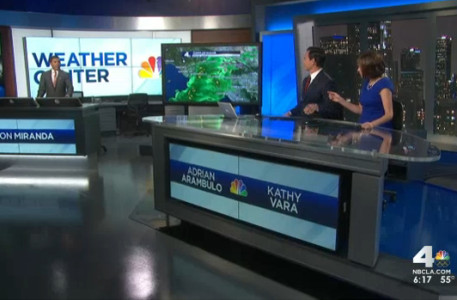 That ring, it turns out, was actually representing the current temperature — 68 degrees — and was part of a new augmented reality setup KNBC-TV is using. Meanwhile, below the ring was a virtual “glass” city silhouette along with 3D NBC peacock and the word “Today” seemingly sitting on the floor of the studio.

In the background, meanwhile, a real in-studio monitor displayed Yanez’s name — in line with KNBC-TV’s practice of using on-set monitors in place of lower thirds for talent names.

OK — we admit that visually this looked pretty cool (he walked behind the ring!), but really, what did it really add to the forecast? Did viewers really need to see a (we’re guessing) thermostat-inspired circle with a number to know it’s 68 out? Probably not — but sweeps starts Thursday so you know how that goes…

Plus, the city skyline, NBC peacock and “Today” kind of ruined the whole effect for us — it made the whole thing look a bit cheesy.

That said, there are probably tons of ways this type of technology could be used much more effectively — and maybe KNBC-TV’s just starting to kick the tires with its new toy.