‘CBS This Morning’ broadcasts from top of One WTC 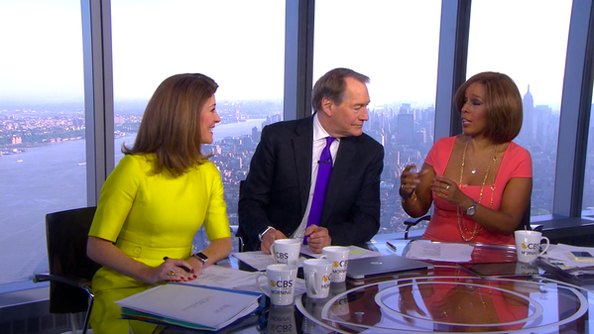 CBS‘s “This Morning” broadcast became the first show to broadcast from the top of One World Trade Center.

The show originated from the 102nd floor, which is part of the three-story observation deck, dining and event space than spans from the 100th to 102nd floor.

Not surprisingly, with views from over 1,250 feet in the air, CBS opted to let the floor-to-ceiling windows be the star of its temporary home, but did bring in a small anchor circular desk with the CBS eye etched on it, a look that mimics the one in Studio 57.

Hosts Norah O’Donnell, Charlie Rose and Gayle King were scrunched behind the desk, which also notably didn’t feature the removable “wings” that normally cordon each host into his or her own little zone.

The show also features a video tour of the new facility: