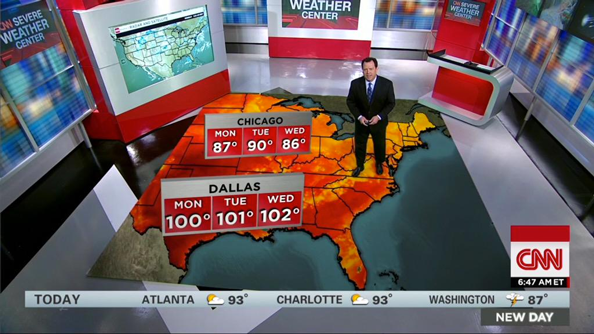 CNN took the wraps off a new weather center that incorporates interactive 3D technology in a unique way — a chroma key floor.

The new studio, which made an appearance during “New Day” Monday, includes multiple monitors and a presentation pod circling a square-shaped green screen installed on the floor.

An overhead camera is used to show bird’s eye view of the studio with the green floor replaced with weather maps that the forecaster can stand on. Parts of the map, meanwhile, are rendered in 3D and allow for additional interaction.

The overall concept of the chroma key floor is similar in many ways to the approach CNN uses in other virtual green screen applications, including its coverage of the missing AirAsia flight, though the weather center does contain hard elements.

Those hard elements also include a wraparound wall with blurred graphical panels that appear to be a stylized cityscape. It’s interesting to note the design of these graphics are similar in color to the look and feel of the “CNN Tonight” graphics.