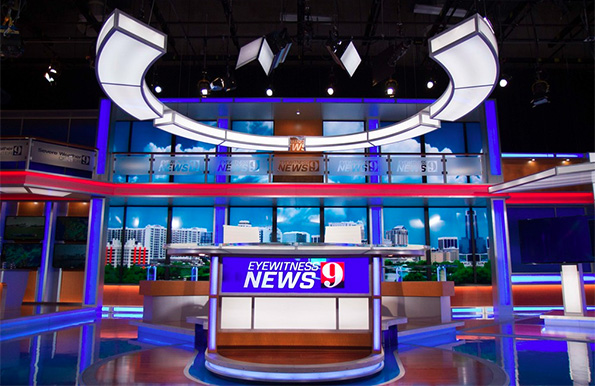 WFTV-TV, the Cox owned ABC affiliate in Orlando, Fla., has debuted a makeover in the form of an expansive new set that represents a drastic departure from its old look.

The new set uses much more of the station’s rather large main studio than the previous set, and also takes on a much more eye-catching look and feel. Behind the anchor desk, an array of 13 vertically mounted video panels are combined to create the look of a two-story window, complete with a faux balcony.

“We wanted to create a set that is distinctive, and blends the feeling of a contemporary interior space, with that of a modern television studio,” said Anthony Ferguson of Z Space Creative. The set also features a weather center with presentation pod and numerous monitors — including a 3×3 flat panel video wall in addition to the traditional chroma key wall. The faux balcony frosted with frosted “Eyewitness News” logos continues into this portion of the set.

On the opposite side of the studio, a flexible multipurpose area includes a three-panel horizontal video ribbon backed by a LED curtain. Above this area is a gently curving internally lit element that matches the look and feel of the one over the anchor desk.

In addition to a larger footprint, the new set also takes advantage of a brighter, more modern color palette through a lighter wood tone, teal backlighting and integrated riser lights. “By using a design that captures a mix of technology with interior features we created a space that is more natural and familiar for the viewer,” said Glenn Anderson of Z Space Creative.

The new color scheme also carries through to the studio floor, which was refurbished as part of this project and features a hard wood surface in some areas.

Overall, the design is a large upgrade for WFTV-TV and combines a hearty mix of technology and modern design elements.