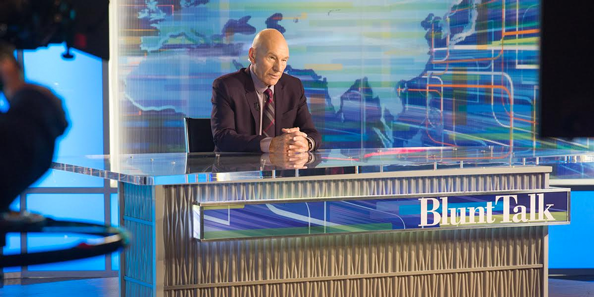 The titular character, Walter Blunt, portrayed by Patrick Stewart, is a British newscaster who takes a position at an L.A.-based cable network. His broadcast, “Blunt Talk,” originates from a studio that combines design elements and methods borrowed from many real-life broadcasts.

At the center of the studio is an anchor desk fronted with a wavy material similar to that which was popular on ultra modern sets for a period of time, providing depth and texture. It’s fronted with a branded graphic and topped with a thick slab of plexi — both common features as well. The show’s logo, meanwhile, appears in a rather elegant sans serif typeface that mixes with the shows graphics package.

Behind the anchor desk, a world map is interwoven with splashes of blues and multicolored “pipes” — which results in a color scheme that’s oddly reminiscent of that on “CNN Tonight” and “Piers Morgan Live.” The layered look, which in this case is created solely through the use of printed graphics, also draws some comparisons to those real life CNN designs. The background, meanwhile, is surrounding by backlit panels set into a metallic framework. Though the scale of this framework seems a bit overwhelming (scale is a common problem on faux “sets within a sets”), the look itself would be very familiar to almost any consumer of TV news.

The “Blunt Talk” graphics, meanwhile, are mostly confined to a simple bar running across the bottom of the screen, with the very colorful UBS network logo on the left and the show name to the right. UBS hasn’t caught up with the recent redesign trend of simple design that’s hit MSNBC and CNN.

Incidentally, UBS, some will note, is the same name of the broadcasting company in the 1976 class “Network.”