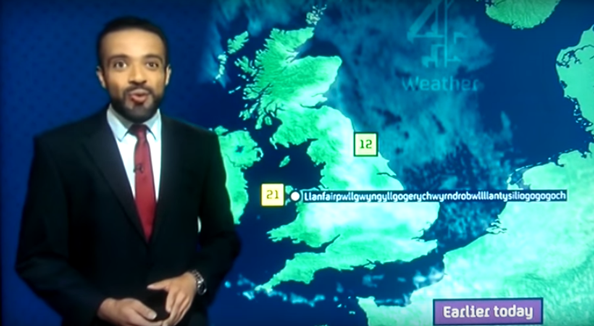 You gotta hand it to British forecaster Liam Dutton.

We all know meteorologists are experts at things that the rest of us barely understand (isobars or millibars, anyone?), but apparently some are also pros at pronouncing incredibly difficult place names as well.

Dutton, who works for Channel 4 News in the U.K., rattled off the city name “Llanfairpwllgwyngyllgogerychwyrndrobwllllantysiliogogogoch” during a forecast recently.

Yes. That’s a place name, not a typo. And yes, on Dutton’s map, the word is wider than the entire British isles.

Of course, as every TV weather forecaster knows, you risk offending the residents of even the most obscure village or hamlet if you don’t include their hometown on a weather map at least once every so often, so Dutton was apparently trying to stave off the Llanfair­pwllgwyngyll­gogery­chwyrn­drobwll­llan­tysilio­gogo­goch-ians (or is it Llanfair­pwllgwyngyll­gogery­chwyrn­drobwll­llan­tysilio­gogo­goch-ites?) for at least the time being.

Llanfair­pwllgwyngyll­gogery­chwyrn­drobwll­llan­tysilio­gogo­goch, in case you were wondering, is a village in Wales and, at 58 letters, clocks in as the longest place name in Europe and the second longest single word place name in the world (the top honor goes to Taumatawhakatangihangakoauauotamateaturipukakapikimaunga-
horonukupokaiwhenuakitanatahu in New Zealand, which has 85 letters).

All that said, we suspect Dutton may have been trying to show off a bit — Llanfairpwllgwyngyllgogerychwyrndrobwllllantysiliogogogoch can also be referred to in a shortened form (but equally unpronounceable) of “Llanfairpwllgwyngyll.”