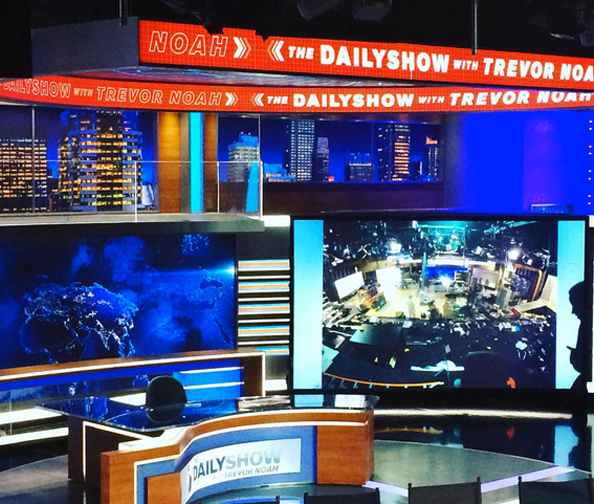 When Comedy Central‘s “The Daily Show” returns Monday, it will have a new look to go with its new host.

Trevor Noah, who is replacing Jon Stewart, will broadcast from a new set that features a world map graphic as its primary background.

The set was designed by Jack Morton PDG and Larry Hartman, with AV integration by AV Design Services. NewscastStudio will have an interview with Hartman next week.

The old “Daily Show” set has been donated to the Newseum.

One side of the set features a large rear projection screen as well as additional flat panel video array, while the other is equipped with just flat panel array.

The positioning of the anchor desk and rear projection screen noticeably closely mirror the layout of the Stewart era set.

The anchor desk, meanwhile, features a video panel and wood front as well as a shiny black top. On either side of the world map are lighted accent strips.

Above the anchor desk is a faux balcony with glass railings and a skyline graphic that wraps around much of the upper part of the set.

Another notable feature is the ceiling fixture, which is configured in the outline of a half circle.