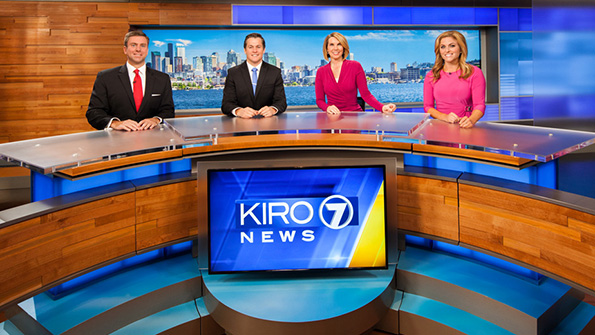 Devlin Design Group launched its second set in the Seattle market in less than a week, with the latest design found at the CBS affiliate, KIRO-TV.

The team at KIRO-TV was laser focused and looking for a dynamic design with a balance of contemporary style, concept, and function, most importantly a design that would resonate with their viewers, the station said in a press release.

“We understood the potential right from our first brainstorm session. We knew DDG could deliver something truly inspiring and engaging, and on par with what people expect when interacting with the KIRO 7 brand. We explained we wanted a set that was contemporary, and it had to be warm and inviting,” said Susan Connor, KIRO-TV creative services director in the statement.

When interacting with storytelling, talent and reporters have a complement of stages with impressive technology, allowing them to go deeper into a story, thus making it easier for the viewer to understand. There are a total of six 90-inch monitors, as well as a sizeable seamless and bezel free LED display.

The set also offers flexibility in a number of distinct ways. The main desk is designed to break into three separate podiums allowing for different configurations for special coverage. The visually interesting background has a mix of textural wood panels incorporated with RGB LED backlit walls for show specific color changes. The wall behind the main desk has two breathtaking backlit photographic vistas, one day and one night cityscape, adding warmth and identity to the iconic KIRO-TV brand.

Just like the popular HBO series “Sex and the City,” the recent launch of two new sets in the Seattle market, KIRO-TV, and the ABC affiliate KOMO-TV, highlight how each “character or station” has its own story and distinct personality.

Dan Devlin, owner and chief creative strategist, at Devlin Design Group explained how Team DDG created the latest scenic storytelling environments at both stations: “There’s a common thread of thinking and strategic insight in our work, but the way that manifests itself visually is constantly changing and specifically tailored to each client’s needs and vision,” he said in the statement.

Creating work with creativity, knowledge, and innovation, are at the cornerstone of every Team DDG project.

“The key to our success and the great variety of work we produce, is to remain passionate and hungry about producing great work for great clients,” added Kartik Dakshinamoorthy, Devlin Design Group’s scenic design director in the press release.