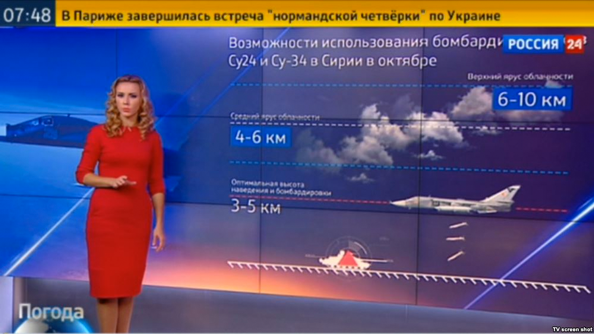 Russia, which is currently waging air strikes against Syria, leading to a humanitarian and refugee crisis, has apparently decided to use its government run media as a puppet to build support for the raids among the general public. A Rossiya 24 weather forecaster appeared in front of a video wall that first outlined the atmospheric and temperature conditions and how they would affect bombing strikes against Syria.

The data was presented using the format that you’d normally expect to see used for almanac data or just a run-of-the-mill current conditions.

Later, a detailed graphic illustrating an aircraft and labeled with various elevations and showing cloud cover, was used.