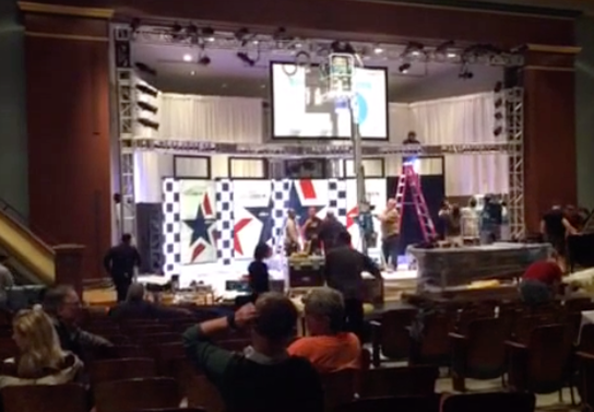 We’re getting a first glimpse of the stage set for Saturday’s Democratic debate.

The debate, scheduled for Drake University in Des Moines, Iowa, is being sponsored by CBS News, KCCI-TV, the city’s Hearst owned CBS affiliate and the Des Moines Register, which is owned by Gannett.

A Vine of the set under construction was posted to Twitter by Niketa Patel, the social network’s news partnership manager.

The debate set is substantially smaller than the ones used for the Republican debates, given that there are only three candidates participating compared to the larger group on the GOP field.

In the photo, the stage is wrapped in a white curtain and topped with a projection screen. What appear to be tall vertical printed graphics with large blue and red stars are separated by narrow strips of video panels. It’s worth noting that the checkered pattern being displayed on the panels is likely just a test pattern and won’t be used during the live event.

If the image is any indication of the final look, it appears the set is going in a lighter, flatter look than other debates.