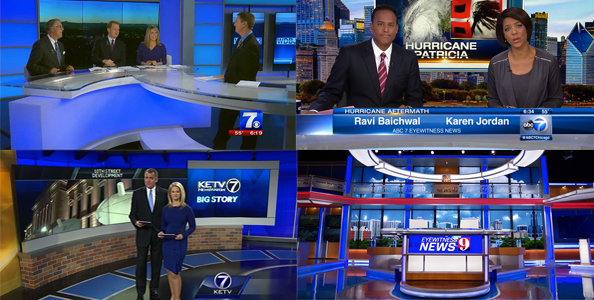 It’s an exciting time to be in the set design industry — new and lower priced technology and creative uses of materials are giving stations of all sizes access to many great set design trends that make a big impact on air.

Here are four of our favorites with details on how you can get them on your next set.

Probably the most visible trend that’s popping up on local news sets around the country are large video walls. As technology prices for low profile and seamless video panels come down, more and more stations are able to afford the technology, which also can be a cost effective investment since it brings almost unlimited flexibility to the set. Take WDBJ-TV, for example. The Roanoke station is a smaller market — 69 — but was still able to equip its new set with multiple flat panel video monitors on its FX Design Group set that debuted in October.

And, tying this trend to the next one, it’s also becoming increasingly popular for stations to use vertically mounted monitors to create large spans of “windows” that can be filled with live or stock video or photos.

Get the look: Be prepared to allocate a good portion of your set design budget to technology. You’ll need to invest in not only the video panels, but also mounting hardware and, depending on your existing technical abilities, the software or equipment to feed images to the screens.

Of the course, the cityscape has been a mainstay of TV news set design for decades, but the increasing use of video walls (see above) has made it possible for those backgrounds to be much more dynamic. Not only does a digital version of a background make it possible to change it out instantly or overlay OTS and topical graphics, but they have also ushered in the popularity of live video feeds from around a station’s city as main anchor backgrounds. WLS-TV in Chicago, for example, uses a large video array behind its anchor desk to feed stylized still cityscapes that are overlaid with topical graphics, OTSs, live shot tosses and live city skyline video (the video wall also got the station in a bit of bind when a repeating image glitch kept showing up during the first weeks on air).

Many stations are also being forward thinking and creating their cityscape video in 4K.

Get the look: Hire a local photographer or even ask viewers for high resolution photos that can be used. Be sure to get shots of the city at different times of the day to match your dayparts. Also discuss the imagery with your set designer and graphics package designer to make sure everything is coordinated.

While sets are typically about the walls and desks, more and more attention is being paid to studio floors. Once just reserved for flat or shiny single colors, it’s now becoming more and more common to see faux wood laminate or other textured finish along with painted or vinyl floor graphics.

At KETV-TV in Omaha, Neb., for example, Devlin Design Group added a ring of blue blocks that not only add visual interest to wide shots, such as the one seen here, but also are a subtle nod to the building’s historic past as a train station. Get the look: Brainstorm with your set designer on ways to place floor graphics in strategic locations that will pack the most punch on air.

Having a monitor on the front of the anchor desk isn’t new, of course, but more and more stations are switching to a different take on this design technique — having more tightly integrated video panels in the anchor desk.

This type of technology has also seen significant price decreases and its lower profile design tends to make it easier to make the panels feel part of the desk, rather than something that’s attached to it.

These types of technology also let designers create video surfaces in shapes or ratios that weren’t possible with standard monitors. A good example is at WFTV-TV in Orlando. The set, designed by Z Space Creative, features a wide video panel in the front of the desk that, at first glance, could easily pass as a printed graphic but gives the station the flexibility to feed branded and topical graphics to it instantly.

Get the look: As your set designer to “wow” you with some innovative uses of newer technology such as video tiles or panels and strategize the best place to integrate them so they show up on camera as much as possible. Brainstorm with your creative services team to generate a list of branded and topical graphics you can feed to the panels on a regular basis, but also think of ways the panels could be used to enhance storytelling by showing B-roll or single-story graphics.

One trend that all of the sets above have in common is the use of color changing technology. As with WDBJ-TV, this can be used for entire walls — or as some of the other word, limited to columns, headers or just parts of the anchor desk.

No matter how it’s integrated, color changing LED is a great way to make a set even more flexible. Not only can different color cues be assigned to separate dayparts, but color can also be used to convey urgency or mood — such as red for breaking news.

Get the look: One of the most common ways to integrate color changing technology is to use RGB LED strips or curtains with DMX control. This allows for instant color changes and various “scenes” stored in the system, just like with studio lighting cues. When discussing color changing LED with your designer, think about ways you can make the most impact with the investment.