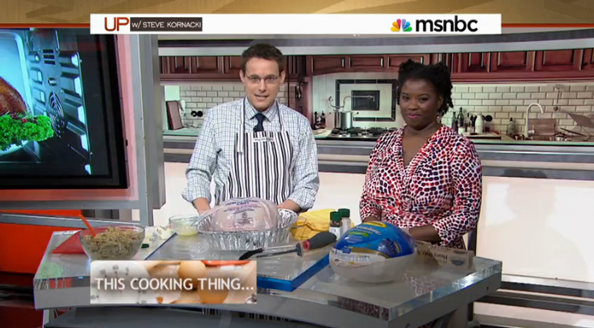 MSNBC used its on-set video panels to transform its modern, backlit set into a cozy kitchen of sorts.

MSNBC’s “Up with Steve Kornacki” aired a rather tired segment of having the host, who, of course, claims no cooking skills, learn to a cook a turkey with the help of the Butterball Turkey Hotline.

For the segment, producers fed an image of a kitchen counter, backsplash and cabinets to the horizontal band of video panels that runs along one wall of the newsroom set. The effect was rather convincing, especially on close up shots.

To round out the “kitchen” look, the show also used one of the studio’s mobile monitor carts to display an image of the inside of an oven with a juicy turkey inside. The setup almost could pass as an open wall oven.

Meanwhile, Kornacki used a slightly curved standing desk to do his actual turkey preparation work on.

The idea is similar to what NBC News’ “Today Show” did in January 2014.