‘Something’s in the wall’ of the Fox News Deck 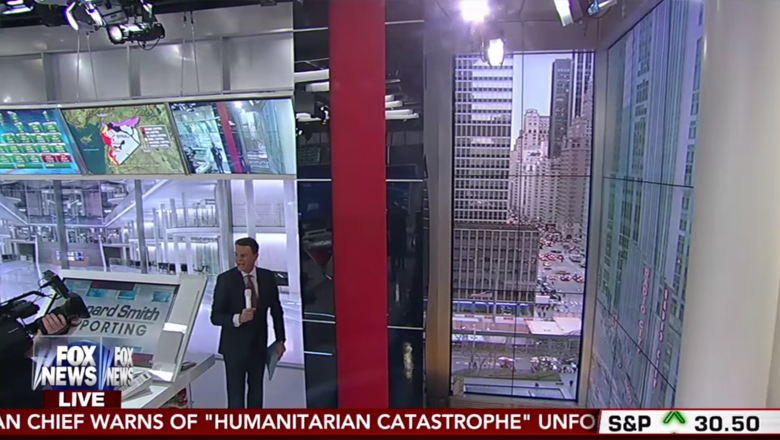 Shepard Smith‘s eponymous show came to an abrupt stop Wednesday after a noise coming from inside a wall distracted the host.

“Is this bothering you?” Smith said in the middle of an interview with an in-studio guest during “Shepard Smith Reporting” that originates from the so-called “Fox News Deck.”

He then proceeded to wander over to the opposite side of the set, sending the Fox News floor crew scurrying, where he held a handheld mic up to the column where the sound appeared to be emanating from.

Smith pointed out that much of what is seen on the set, including the “windows” overlooking a New York City street and view of a “lobby” are actually just printed photos or video panels. Given that the studio is also on the twelfth floor of the building, as Smith pointed out, it was unlikely the sound was an animal.

Smith’s conclusion, then, was that a person was in the wall. “Fox security, would you get on that please?” he said before swiftly walking back into position and continuing the show.

The Fox News Deck debuted in October 2013 as part of a revamp of the network’s afternoon programming to focus more on rolling breaking news coverage and built around Smith.

Interestingly, the actual sound doesn’t appear to be all that prominent on the video clip from the show — though there are sound muffled sounds that could either be the suspected person or just from Smith holding the mic against the wall and moving around the set.

So, what’s making the sound? A giant sewer rat? The legendary flushed alligators? Or maybe it’s just someone who really ticked off Roger Ailes.

This wasn’t the first time Smith fell victim to a distracting sound. Way back in 2007 during the renovation of Studio B, a fire alarm went off in the temporary newsroom set Smith was using:

Fire alarms going off during newscasts seems to be a recurring issue, at least according to this CNN report:

And the mea culpa from “Nightly News”: