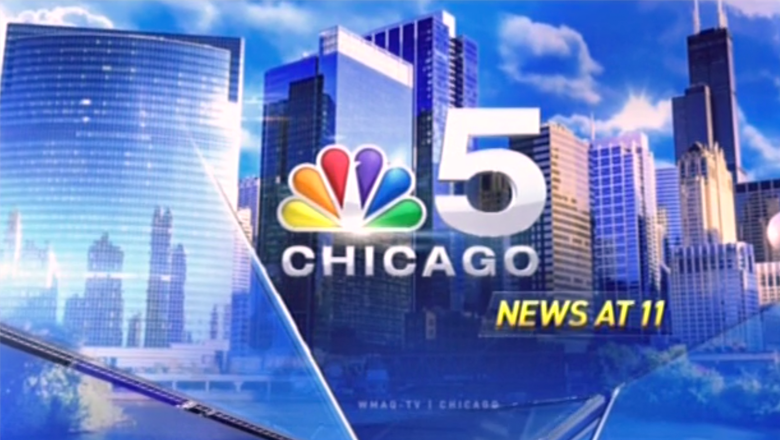 The complete graphics overhaul at NBC O&Os is gradually rolling out across the country, and with it comes a brand- and information-driven design that gives the stations access to new graphical storytelling opportunities.

At the heart of the package, created by NBC’s in house agency NBC Arthouse, are large, exaggerated “shards” of glass-like elements inspired by the “feathers” of the NBC peacock. The graphical cues of the NBC peacock, meanwhile, is also worked in through the use of a variety of diagonal design elements, including in teases leading into breaks.

Take, for instance, the newscast title cards, which are now also sans announcer. The new design includes prominent city imagery as well as a glassy version of the station logo — with a slightly more prominent “feather” in the lower left portion of the screen.

Through some careful lighting and other effects, this “feather” not only makes the shape a bit more obvious, but it also helps frame the logo center screen. References to this same design strategy are also found in the matching programming schedule graphics as well as in segment and franchise opens. In these cases, not only do the “feathers” create some eye-catching shapes, but also create a look reminiscent of rays or bursts. In addition to the nods to the station and network branding, the new package also does a great job of bringing control to what could otherwise be a cluttered screen. For example, a standardized bug block appears in the lower right corner of the screen. At the heart of this element is, of course, the station logo.

That logo sits inside a subtle but clearly delineated box that’s also home to the current time and temperature as well as, below these in smaller type, abbreviated localized weather forecast information.

Despite cramming in quite a bit of information, the bug still manages to be streamlined and also seems to strike the right balance between keeping the branding prominent while also offering up additional content. To the left of the bug sits what we’ll call the “footer bar” — a thin off-white strip that runs across the entire width of the screen. Some stations use this space for a ticker during all or part of the newscast, but the other use seems to be to rotate between mentions of the stations’ social media accounts, website address and mobile app promos.

By creating this additional fixture to the graphics package, Look N effectively removes this from where it might otherwise be displayed — the bug or a random corner of the screen — and gives it a streamlined home. The subtle animation draws some attention to the bar, while the scaling of it allows for the text in it to be much more legible than it might otherwise be.

The new package also features a new feature — what we’ll call the “header bar.” This narrow strip runs across the top of the screen for most of the newscast and is used for a mix of both branding and storytelling purposes. During the newscast pre-show teases, for instance, the text “(Newscast Name) at (Time) starts right now” is displayed, giving stations a subtle yet effective way to integrate the newscast branding. Also during the teases, an additional strip appears below this and is used to a display a rundown-style list of the stories being promoted on screen. Then, at the top of the newscast for the anchor hello, the header bar holds the current date as well as the newscast title again.

It’s also during the top of the newscasts that the graphics package’s lower thirds typically make their first appearances — a sleek and shiny blue banner while simply silvery type. For two anchor setups, the camera right anchor’s name and Twitter handle becomes justified right, bumping up against the bug box.

Behind the text, meanwhile, a subtle animated pattern of the peacock feathers is visible. The header bar also is used prominently for breaking news coverage. During these stories, the graphics package turns red and the words “Breaking News” (repeated twice) radiate out from a small NBC peacock in the center of the bar.

This is a great example of one of the key advantages to having the header bar as a standard graphical element — it can instantly be swamped out to, quite literally, frame the newscast in a different way. While the bold red switch is obviously more prominent, the technique is used effectively throughout the package. Another place the bar are particularly effective is during weather, when the station’s weather branding, such as the “Storm Team 5” branding shown here, is placed in it. The effectiveness becomes even more evident, however, once the weather maps start being used. The narrow yet prominent placement of the header bar opens up valuable screen real estate for displaying maps and other weather graphics.

The package also, smartly, adds a narrow, darker label directly under the header bar, which not only allows the map to be more prominent, but seamlessly integrates with the brand name in the bar above it. In some cases, like that shown here, a third bar houses additional information to create a single, cohesive header. The Look N package also does a great job of using OTS and sidebars to illustrate stories and provide additional information.

The standard OTS and sidebar look is a portrait-shaped space placed to the right side of the screen. The background element of the graphic lines up with the left side of the bug box, making the entire area feel like a single, integrated block.

Above the image or content in the sidebar or OTS is a glassy slab that appears to jut forward and complements the bug box and other design elements well. In many cases, the same basic layout is used aside packages or voiceovers to provide bullet points of additional information. The space can also be used to incorporate a map, as shown here, allowing the talent to remain on camera while also providing additional information. It’s worth noting that the comparatively large amount of space devoted to the image makes this type of application particularly effective. A similar look, meanwhile, is used for fullscreen graphics. In these, the image space is slightly larger and is directly above and the same width as the bug box, with the 3D glassy effect to the left, which, in turn transitions into open space for text or additional graphics.

In these applications, the angular peacock feather motif is incorporated both into the background, which also features a thick, extruded version of the symbol, as well as the far left side, where the glass effect ends in a sharp diagonal line.

Creating a graphics package that works equally well across a number of distinct markets is never an easy challenge, but Look N is able to accomplish a lot of branding and informational integration into a look that’s also cohesive, effective and eye-catching.