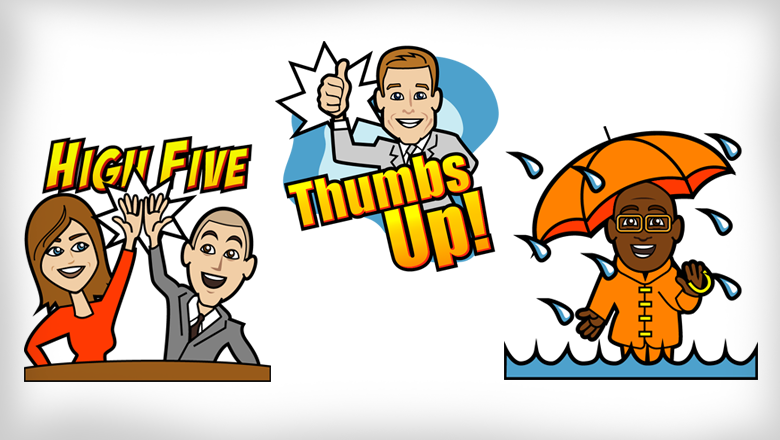 Along with the much anticipated iOS 10 from Apple came a new feature — the ability to add “stickers” to iMessage conversations — and NBC News‘ “Today” jumped at the opportunity to include its own pack on launch day.

The pack, which currently features about 30 virtual “stickers” that can be sent as both regular photos or, to users also on iOS 10, “stuck” on top of the conversation bubbles: Most of these contain a one liner such as “high five” or “mic drop” or, logically with Kotb and Gifford, “cheers!”

For the most part, the figures shown in these images don’t exactly look all that much like the host in question.

Also included are photograph based cut out versions of the hosts, as well as the show’s “Puppy with a Purpose,” Charlie.

The pack is rounded up with a pack of animated GIFs taken from the show itself.

While the stickers are certainly cute and entertainment (it was good for a solid minute of entertainment here at NewscastStudio), it’s not entirely clearly how they can be used beyond a rather weak branding gimmick.

First, as mentioned previously, the illustrated versions of the hosts don’t actually look all that much like them — so without context, it seems likely that many recipients might not even know what the images are (other than being cute images with a clever headline).

The photographic and GIF stickers, however, could be a bit more useful since those poses and sequences uses are more “reactionary.” For example, feeling questionable about something? Well, so is Al! It will be interesting to see how “Today” expands this pack — including if images are updated on a daily or weekly basis to reflect show segments and topics. It’s also yet to be seen if other network news shows follow suit — though it’s hard to imagine a Charlie Rose sticker from “CBS This Morning.”