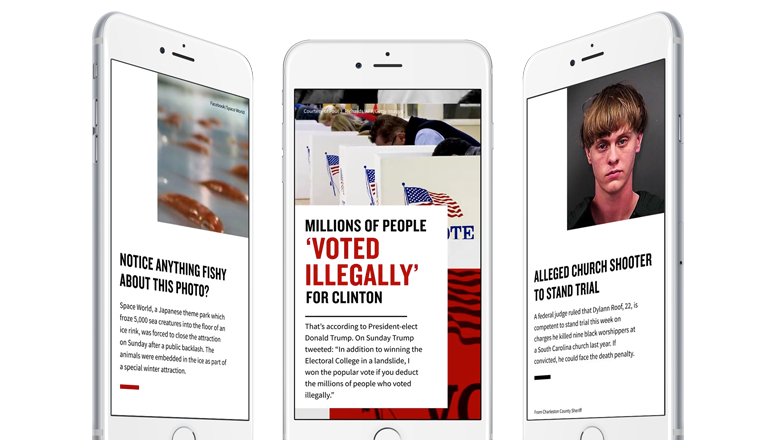 CNN has redesigned its look and feel on popular app Snapchat, placing more emphasis on “snippets” while still linking users to longer form content or video.

The new layout uses a careful mix of text and photography to create easy to read and clean screens that are ideal for the fast-paced nature of Snapchat.

The generic story template places a photo in the upper right of the screen with a headline rendered in a condensed version of the network’s custom CNN Sans font.

Under this, lighter but wider text summarizes the story a glance, leaving the full details to users who chose to swipe through for more details or video clip.

Variations on the look include a photo background with text placed in a white box, datapoints shown in large text with graphic accents surrounding it. Other content partners with channels on Snapchat, meanwhile, use a similar approach that emphasizes visual storytelling, quick bits of information and brief text summaries:

Mashable’s channel uses a unique typeface and bold pink color — along with heavy use of emojis. Now this News uses a simple typography based look accented with thick rules, though the mix of typefaces and color usage found on its snaps are a bit inconsistent. Vice News uses a simple look with thick rules as well, with a mix of headline-only and summary-style screens, the latter of which tend to be bit more text heavy and cluttered than other channels. The Wall Street Journal uses a modern look of its trademark borders, typically rendered in a teal, which is also used as an accent color throughout.