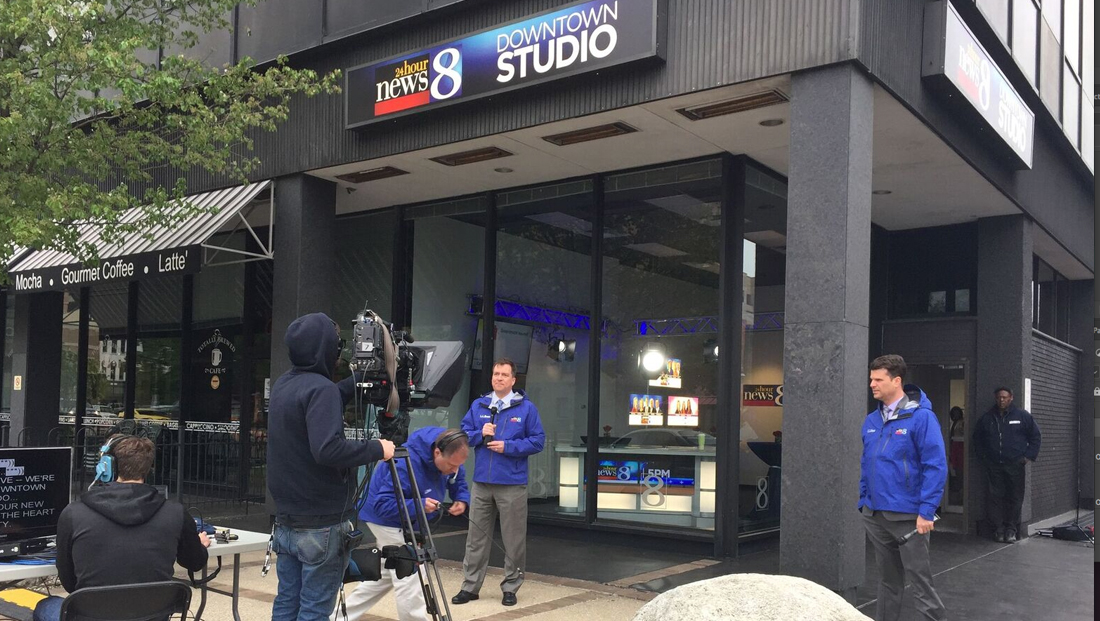 WOOD, an NBC affiliate in Michigan, officially opened two streetside studios that mirror the look of its main set.

The studios, which are in downtown Grand Rapids and Kalamazoo, Michigan, give the station easier access to both cities.

The station has also assigned photojournalist Nick Ponton and reporter Brady Gillum to be based out of the Kalamazoo studio, which is located on the ground floor corner of a mixed use building and features a small anchor desk and workspace. The desk’s design, which mirrors the look at its main studio, allows the station to display branding prominently to passerby and use the sweeping view of downtown as a backdrop, or, alternatively, shoot the opposite way against an array of flat screen monitors.

Competitor WWMT is based in Kalamazoo, so creating a bureau in this city could be a strategic move to bolster viewership in this portion of the market, which is about 50 miles from the station’s main facility in Grand Rapids. This streetside studio, which is also situated in a windowed corner of a building, features a larger production space with anchor desk and vertical monitor stack mounted on a structural column.

The look of the station’s anchor desk is mirrored here as well, while the vertical monitor array is similar to the one found camera center behind home base on the main set. The plans to originate select newscasts from the new set, with its main studios remaining in use as well.

The creation of the studio’s set pieces, AV integration, engineering and design was handled by an in house team: