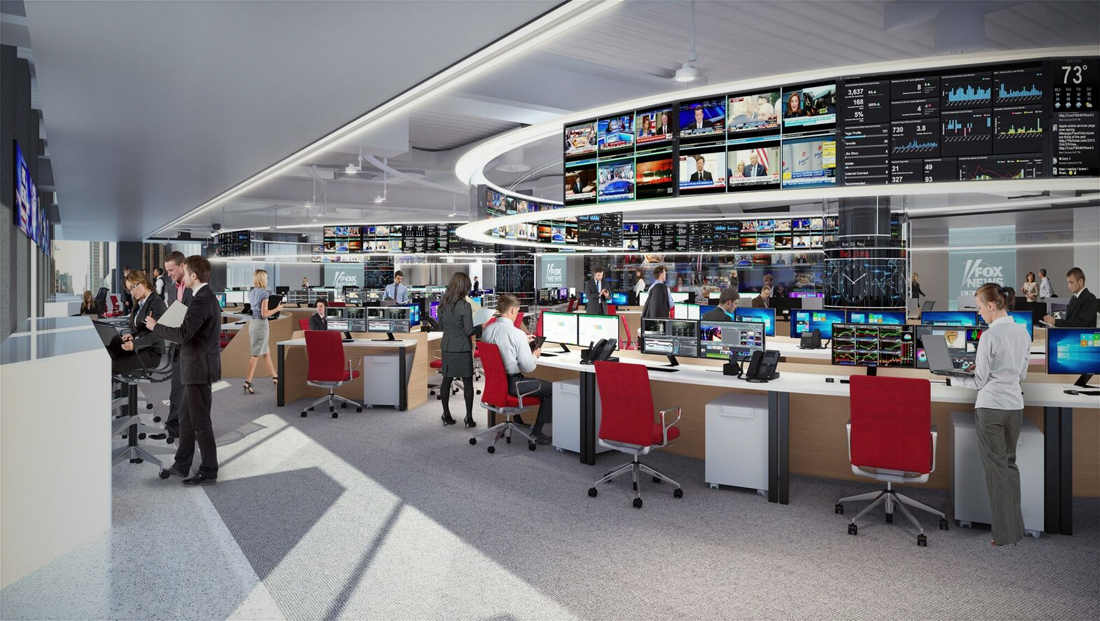 “Today we are unveiling the physical transformation of our newsroom and the Fox News offices at our headquarters in New York … This is a major investment in the future of Fox News and a sign of my unwavering confidence,” said executive chair of 21st Century Fox Rupert Murdoch at a companywide address this morning.

The new newsroom will be constructed on the second floor of the News Corp. building on the Avenue of Americas. The network also released renderings from the design team of Jack Morton PDG and Gensler Architecture of the new open concept design and layout, which calls for a figure-eight shaped header with integrated video displays.

Beneath this will be workstations arranged in a series of concentric rings and arcs that echo the header, as well as an X-shaped desk arrangement at the center of the space.

In the center of each ring, meanwhile, a large column with wraparound panels.

The renderings also showcase an adjacent studio that will overlook the newsroom and be used to enhance the network’s breaking news coverage.

The goal of the new design is to create a “cohesive space that reflected a modern newsroom in this new era of information,” said Fox News Channel President of Programming Suzanne Scott at the event.

Construction is slated to begin July 1 and will be completed in four phases.

Fox News Channel most recently completed construction on its two story Studio F, which hosted its 2016 election coverage and is also home to many prominent Fox News Channel shows.

Fox News representatives say that the network’s other prominent working newsroom-style set, the Fox News Deck, which is used primarily by anchor Shepard Smith, will remain.