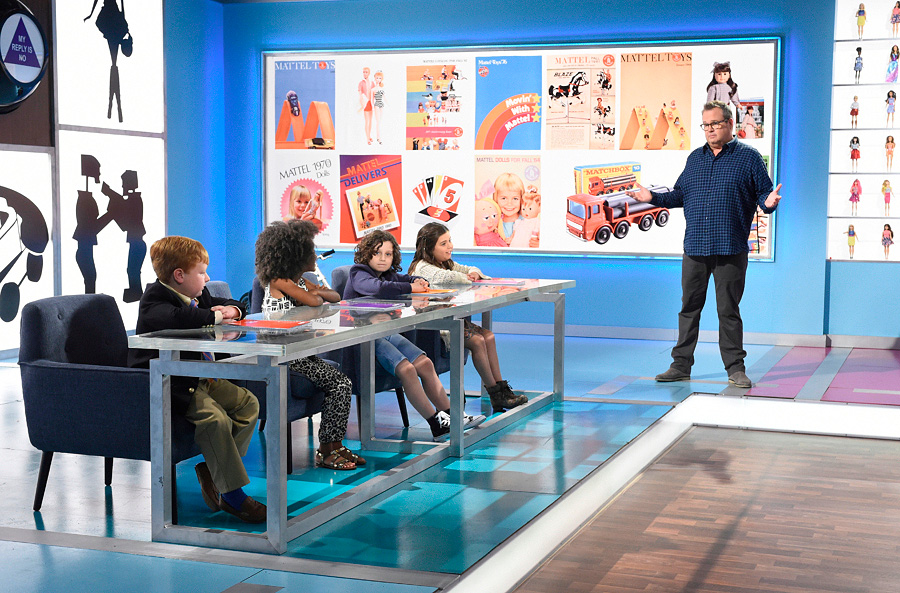 ABC’s new competition reality show “The Toy Box” has a multifaceted “toy testing factory” with multiple spaces that form a bright, cheerful and fun look with a bit of a mysterious side.

Produced in partnership with Mattel, the show features toy inventors who pitch their ideas to a panel of toy industry experts, “Shark Tank” style, and, if they pass this first step, go face-to-face with a panel of children judges in what’s often an even tougher “tank.”

When an inventor is first introduced on the show, he or she is first shown in a waiting area space meant to purposefully avoid feeling overly corporate or intimidating, notes designer Jeff Hall of JHD Group.

The idea was to suggest the space was renovated in the 1960s, a classic age of toy design, with brick textures and wood paneled accents. A window also lets the audience see into the adjoining hallway, reinforcing the notion that the entire set is some type of top secret toy testing facility.

An upstage window looks over the hallway, which is also used for the inventors to briefly explain their toy to host Eric Stonestreet, of “Modern Family” fame.

This hallway is bright and airy with backlit panels and pilasters each displaying a single classic toy. Once the inventor has been introduced, they head into the adult panel.There, he or she enters through a door that’s purposefully washed out with bright, clean white light that obscures the space behind, giving a sense of mystery mixed with hope.

The next space, the lab, features custom printed wallpaper created from old blueprint designs of the model cars and Barbies, while display cases show other classic toys. The area is meant to feel worked in, explained Hall.

In these spaces, the scenery color scheme is kept fairly neutral, with much of the colors and textures coming from the toys and toy related imagery carefully placed piece by piece by the design team. The center area of the space includes reconfigurable table setups so a variety of toys of a variety of sizes and types can be demonstrated, while a large whiteboard area showcases designs and concept sketches.

If the inventor passes this phase of the test and moves on the “toy box” — he or she exits through a brightly lit door for the next step in the journey. At this point, the inventors don’t seem to realize they will be judged by kids until the four judges, who are initially cloaked in darkness in front of a large mural featuring silhouettes of classic toys. At the right time, a coordinated cue slides the judges forward with hidden automation in the floor and brings the lights up, surprising the inventor with what type of judges they will be facing — a group that’s significantly shorter (and much more into knock-knock jokes) than, say, the stars of “Shark Tank.”

The walls in this space are adorned with images of over 30 vintage posters Mattel hand picked from its archives that were then transformed into a massive graphical backlit wall panel.

“In keeping with the flagship Barbie Stores, we created a repetitious wall lined from floor to ceiling with Barbies of all types.” The doors stand on thin shelves and are backlit with large white panels.

“In the metaphor of a jewel box, secondary and tertiary colors were used to set the walls,” explained Hall. The space also features an open space, or play area, for the kid judges to experiment first hand with the toys being judged, the winner of which will actually be produced and sold nationwide by Mattel.

Behind of each of the judges is an oversized Magic 8 ball with a video panel replacing the center of it, which is cleverly used to display each judges’ response to the toy.