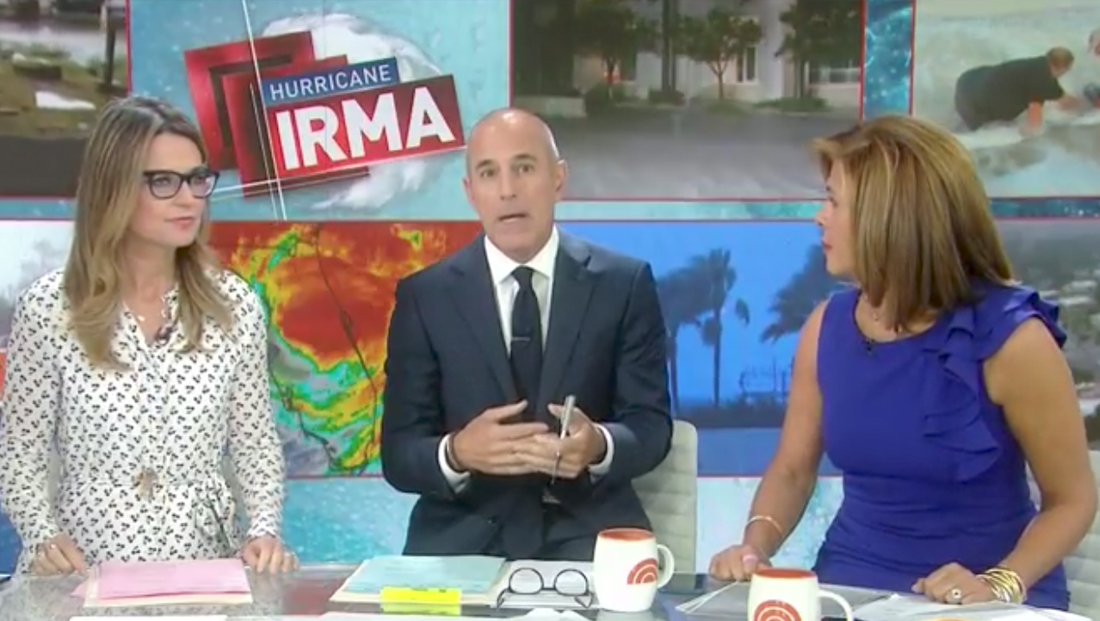 The big three networks offered up special and expanded editions of their morning news broadcasts Monday morning with a focus on Hurricane Irma.

The network also moved its main anchor desk in front of Studio 1A’s product area video wall, with the panels displaying the Hurricane Irma logo and imagery and live feeds from the field on a stormy blue background behind Savannah Guthrie, Matt Lauer and Hoda Kotb.

The show also used the heavy hitting music bed that it has been used for storm coverage recently, including for Hurricane Harvey.

After the open ran in the 8 a.m. eastern hour, Lauer was caught on an open mic referring to a live shot of correspondent Kerry Sanders, who was live on Marco Island attempting to rescue a baby dolphin captured in the surf.

Note that in the video above, Lauer indicates it is 8 a.m., even though the clip was taken from a central time zone feed at 7 a.m. local time.

The locally inserted namedropper ticker also appeared on screen without the network’s normal background layer during the open.

After a brief intro that included announcing the Irma was no longer a hurricane while a camera panned from a vertical flat screen and two horizontal video panels before zooming in to Sanders’ live shot on the primary video wall.

The network then carried a good chunk of the video of Sanders attempt to rescue the dolphin. Sanders, who had lost IFB due to the water, didn’t initially realize he was on the air and started a formal live report, while still wrangling the dolphin, in the middle of Lauer ad libbing.