Emmys create ‘stages within a stage’ 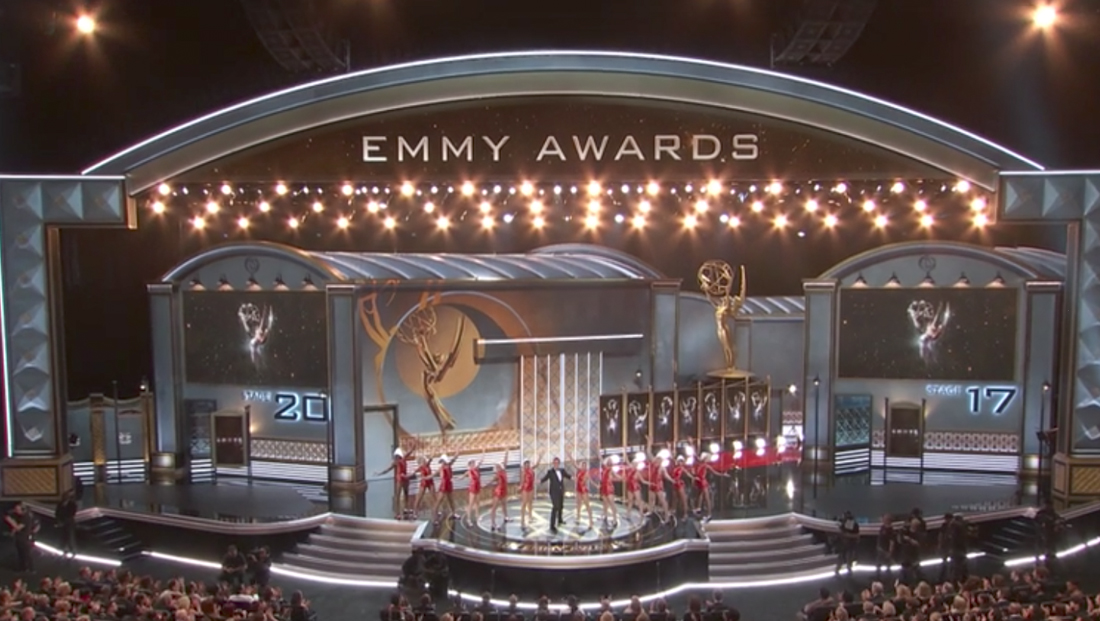 CBS’s broadcast of the 69th Primetime Emmy Awards Sunday, Sept. 17, 2017, paid homage to the large sound stages used by many television shows by recreating two versions of the structures on the stage at the Microsoft Theater in Los Angeles.

The setup that appeared on stage behind host Stephen Colbert included recreations of the exterior of two sound stages with the signature curved rooflines, one of which also served to house the live band.

Angry viewers are in no mood to laugh at @SeanSpicer’s #Emmy jokes https://t.co/drWjFHGiBm #TVNews pic.twitter.com/hpTnCcAR8H

Much of the exterior walls of the faux buildings were created using LED panels, making it possible to change to use the large spaces as video walls to showcase the current category and other graphics, giving the appearance of large billboards or even murals on the side of the buildings.

By placing the two buildings off axis and off center with the camera right one being placed to the far edge, the shape of the buildings was more pronounced, and also allowed the images shown on the video walls to appear at varying angles.

In addition to the structures themselves, the set design also included the use of large, hanger-style doors, another nod to the architecture of sound stages. A common background motif used throughout the telecast was the use of a cross-hatch pattern, a design element that could be a nod to the vast metal girders found on sound stages, while the gold and silver colors used to create them added a bit of elegance to the look. Between the two structures, meanwhile, was a multi-panel video panel gold structure that served as both a background element and to showcase images and live feeds of the nominees just before the winner was announced — in place of the normal spit screen, multiple box layout used by awards shows.

Win the winner was announced, the camera would focus in on his or her image before transitioning to the acceptance speech segment.

In front of this area, the floor was finished in a red tone while dramatic footlights and a red velvet rope created a quite literal interpretation of a red carpet area. The stage was also dotted with freestanding wheeled lights with large barn doors as well as exposed industrial-style lightbulbs. The gold accents on the set, meanwhile, were picked up in the telecast’s graphics package, which used a rich palette of violets and bursts of gold light to create element, simple graphics, while also incorporating the trademark intertwining globe in the Emmy statuette. Other graphical elements made use of fine, almost ethereal sparkles, including in a left-to-right wipe.

Both numbers are, incidentally, actual designations for sound stages on the CBS Studio Center in Los Angeles.