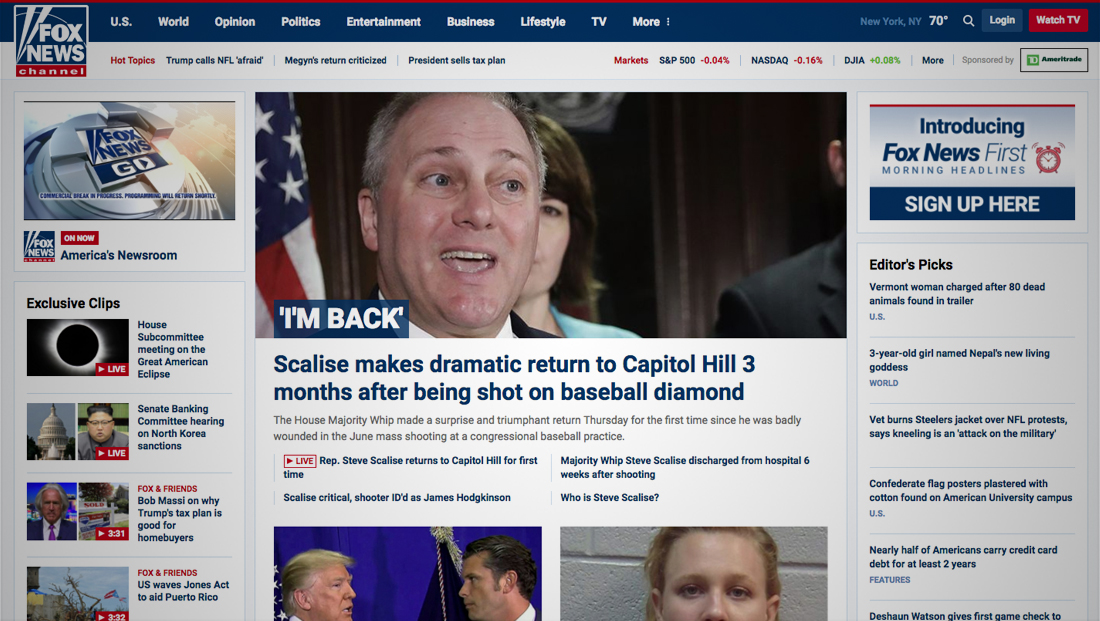 Shortly after launching a new on air look Sept. 12, 2017, Fox News also launched a new look for its website, FoxNews.com.

While the two overhauls did debut within a week of each other, the two projects had actually be separate initiatives within Fox News, John Fiedler, the network’s senior vice president of digital, told NewscastStudio. “It worked out well that we could launch both new looks at around the same time,” he said.

The new online look officially went live Sept. 18, but the network had been showing a small portion of visitors the new design for a period before that while also soliciting feedback.

“The homepage of Fox News is how the majority of our users find our content, so we wanted to make sure we gave our new look enough time to really know how our users would react,” said Fiedler.

The new look allows the network to surface video from its TV side in a more prominent way, which was a key goal of the redesign. The lead story, which occupies a good portion of the homepage, typically features an embedded video player along with links to related coverage, while additional boxes below this link to other text and video content. Father down the page, additional category-based sections span the entire width of the page, with a single large image and well spaced headlines to the right.

Also included, in the left column, are additional plugs for video — including a live stream of the cable channel and featured videos. In an interesting tie to the on air look, the Fox News logo, which takes on the cleaner look introduced in the TV graphics package, the red bar alternates between the current time and the word “channel” (though, it’s worth noting, at the time NewscastStudio reviews the site, the time being shown was an hour off).

The header bar of the new design not only serves as a navigation element, but features “at a glance” information weather, stocks and trending topics. Those pages include a large, bold centered headline and space for a large photo or video player, along with legible blocks of text with generous white space on either side. Sidebars and other modules offer links to related content, video clips and trending stories.

Despite having visual similarities between Fox News on TV, the network strategically focused its website redesign efforts on how the site would work across digital platforms.

“We wanted to tie together our digital experiences in a much better way so that our users could more easily browse all of the content we offer,” said Fiedler. Key attention was also played to making the site more mobile friendly, which is how the majority of digital content is being consumed, according to Fiedler.

Now that the design has gone live, Fox News is focusing on growing metrics such as overall content consumption and engagement, though the network did not offer any specifics.