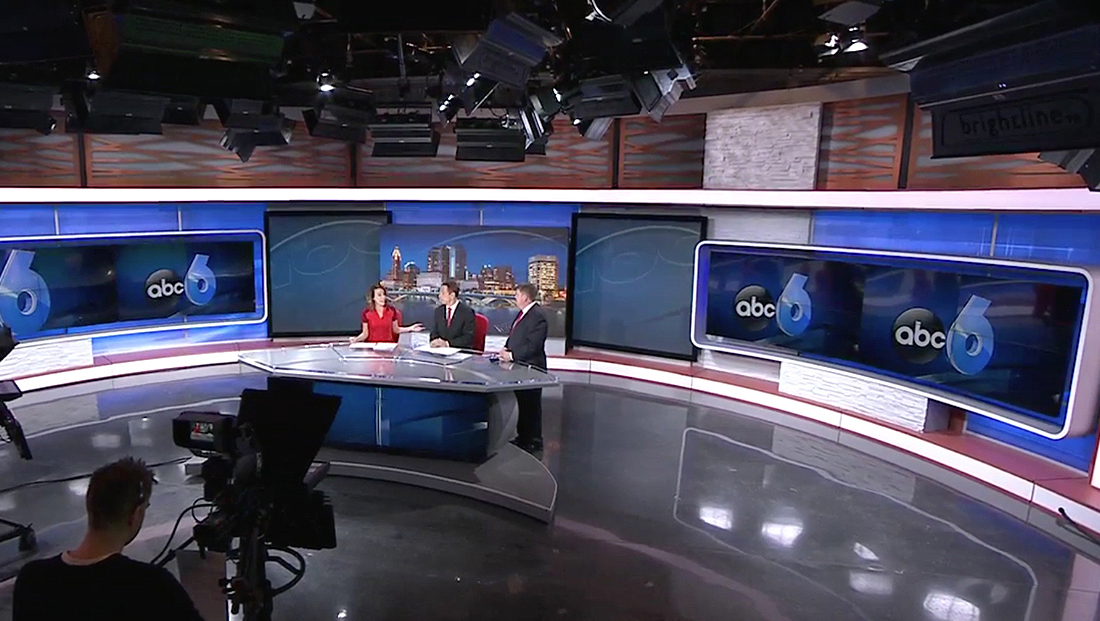 WSYX, Sinclair’s ABC affiliate in the Columbus, Ohio, market has a new home outfitted with plenty of video walls and panels that give the station a wide variety of shooting option.

So just what does the full new set look like? @staciawsyx6 takes you on a tour of our new home! pic.twitter.com/VQg1PaM66R

At the center of the curve is the set’s main background — a seamless LED video wall installed atop of a stacked stone base flanked by two additional LED panels that are used to project subtle animated backgrounds behind talent. One either side of these panels, the two frame elements wrap around walls made of smaller LED video panels, with the one of the left being wider, 7×2, allowing it to be used as an alternative anchor background with distinct zones for left, center and right graphics, while the other is 4×2. AV for the project was provided and integrated by Primeview.

Wrapping around the base of the entire set wall is a copper and white footer element, a look that is mirrored in the the narrow header band, which is equipped with color changing LED.

That reddish copper hue is echoed in the curved wave texture in the set’s header shoot off walls. The set also includes a movable anchor desk fronted with additional video panels that can be moved out of the way to allow the station to frame the video walls in wide standup-style shots uses for news and weather as well as tighter standup, weather or toss shots. The flexibility of the studio’s design gives the station a variety of options for each type of segment. For example, weather can be presented against one of the side video walls in a tighter two shot or using the studio main seamless video wall. On the far left of the studio, three pivoting, vertically mounted panels provide an additional storytelling venue, with the option to shoot the area in a variety of configurations. WSYX’s new set also features a weather center with a single monitor mounted to the front of the desk and multipurpose lifestyle set with three additional video panels — one landscape and two portrait.