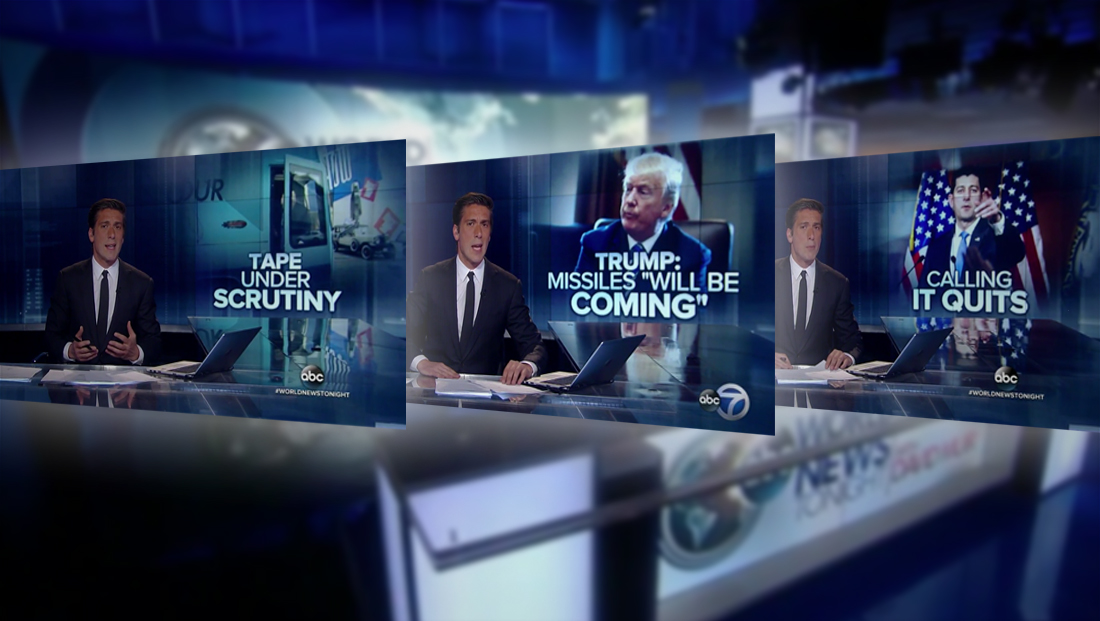 With three big stories breaking in the Donald Trump universe, network newscasts had to juggle a busy night of news Wednesday, April 11, 2018. All three of the big three evening newscasts lead the first feed with Trump’s threats to Russia to target Syria with missiles — though “ABC World News Tonight” devoted the most coverage, racking in at about seven minutes. Both NBC’s Lester Holt and ABC’s David Muir had Trump quotes behind them on the video wall OTS graphics, while CBS used a slightly toned down paraphrased version of the threat behind Jeff Glor. After this point, CBS took a slightly different route, opting to cover Paul Ryan’s surprise announcement to not run for re-election, clocking in about 2 minutes of coverage.

Ryan’s move, which had been rumored for some time now, is speculated to have ties to the relationship between Ryan, Congress and Trump. NBC and ABC, meanwhile, opted to cover new details about the infamous “Access Hollywood” video featuring Trump laughing about grabbing women “in the pussy” with then host Billy Bush. ABC’s graphic read “Tape under scrutiny” while NBC took a bit of the emphasis off the tape itself in its OTS, instead focusing on the legal battle between Trump, his former lawyer Michael Cohen and federal investigators. NBC devoted about two minutes to the tape and legal battles, while ABC went slightly longer. Next up on NBC and ABC was the Ryan story, which both networks clocking in about two minutes — though NBC devoted a slightly higher amount of time. ABC’s video wall headline read “Calling it quits,” while NBC went with the wordier “Ryan surprise announcement” which, not surprisingly, required a condensed typeface to fit in.