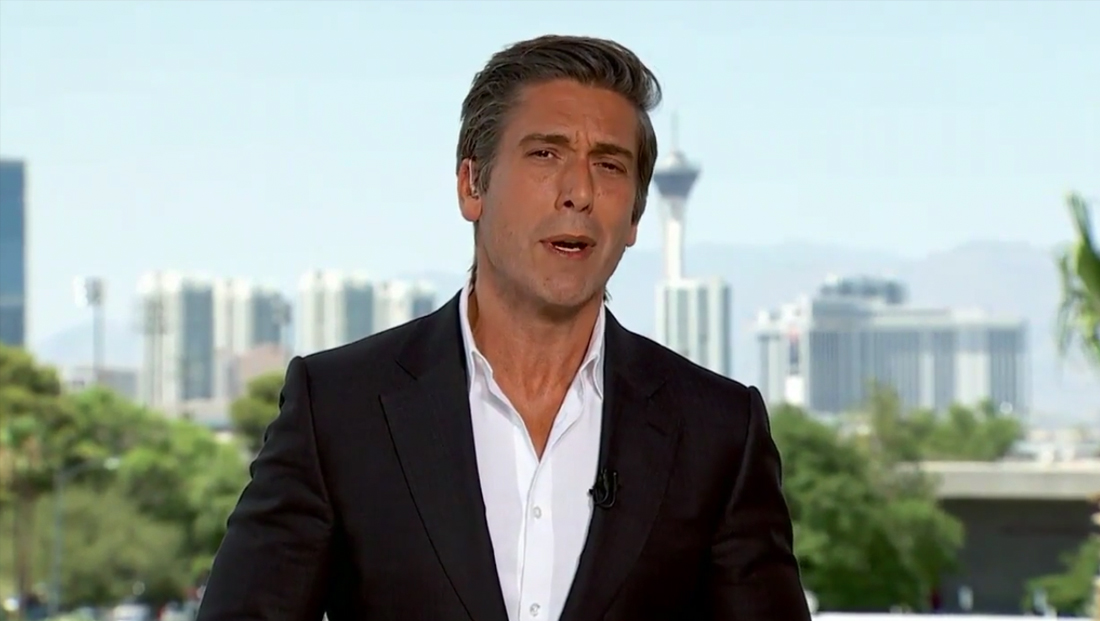 NBC, ABC and CBS all anchored their evening newscasts from outside of New York Tuesday, June 26, 2018 — but, each was in a different city. All three anchors were slated to be headline speakers at the PromaxBDA Station Summit in Las Vegas, so Muir was already in the city.

“NBC Nightly News” apparently used Los Angeles as a stopover of sorts for getting Holt to Las Vegas, while the “CBS Evening News” did the same with Glor but in San Fransisco.

Notably, CBS did not use the iconic Golden Gate Bridge behind Glor, instead opting for a view of the expansive — but colorless — San Francisco-Oakland Bay Bridge.

Glor appeared to be reporting from the roof of the CBS News bureau and affiliate KPIX on Battery Street, which, due to its location, doesn’t have a view of the Golden Gate Bridge.

ABC and CBS did, however, make connections to their respective locales, with Muir featuring a kicker about the invention of the “space pen,” which are manufactured in Las Vegas.

Muir’s location gave a view of the Vegas skyline, most notably the 1,149-foot tall Stratosphere tower. On the other hand, Glor pointed out near the top of the broadcast that the Supreme Court’s so-called Muslim ban ruling, announced earlier that day, started its journey to SCOTUS in the Ninth Circuit Court of Appeals, which is headquartered in San Fransisco.

That said, it’s not clear if Glor’s presence in San Fransisco was planned or simply a coincidence.

Holt, on the other hand, stayed inside the network’s studios, with the normal working newsroom set behind him.

It’s not uncommon for network anchors to anchor from outside their New York City studios when on assignment or traveling to another location, much like NBC had Holt anchoring from Los Angeles before and after the Singapore Summit as a way to break up what would have been a brutally long string of flights.

ABC also took a similar tactic with Muir, though having him fly the opposite way around the word with a stopover in London instead.

In addition, in the case of major news events, all three networks will typically dispatch their anchors to the scene.