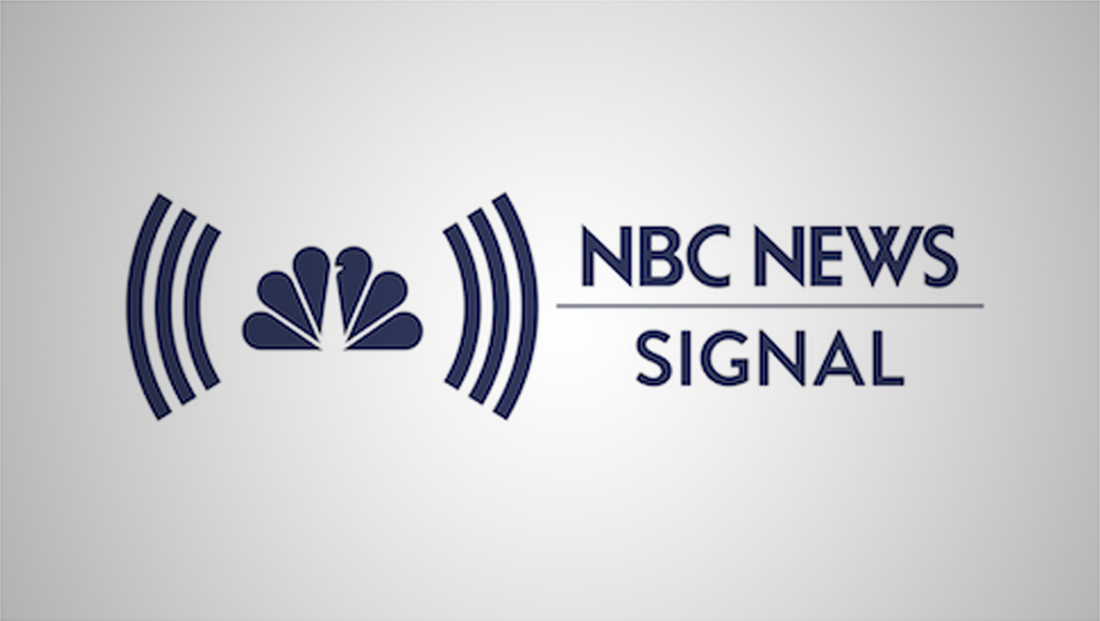 Update: NBC News has announced it will be changing the name of NBC News Signal to NBC News Now.

The network announced Wednesday, Oct. 24, 2018, that the new streaming service will use the name “NBC News Signal,” which is already being used for a weekly Thursday evening newscast the network launched.

The network’s logo incorporates the NBC peacock inside of two wifi-inspired icons that radiate outward. The signature NBC News logotype is placed to the right, with the word “Signal” below in what appears to be Brandon Grotesque.

The font has many similarities to the NBC News logotype, especially the sharp angle in the “N.”

Notably, the network also uses this (or a similar font) in its political coverage graphics.

In addition, the network has announced some initial programming plans for the streaming service, including the expansion of the “Signal” newscast, anchored by Simone Boyce, to every weeknight later this quarter.

Additional daily programming, including a morning and afternoon show and hourly news updates called “Brieflies,” will launch later this quarter and in early 2019.

Leading up to the midterms, Steve Kornacki’s digital show “218: Race for the House” will air daily at noon.

“There is a growing segment of people who have never had a cable subscription, but who are just as hungry for smart news as the prior generations of news watchers who have consumed NBC News for decades,” said Nick Ascheim, SVP of digital at NBC News Group in a statement. “These consumers – who are up-to-date on the headlines but are seeking a deeper understanding of the news of the moment – are increasingly turning to OTT devices for ‘lean back’ news consumption or an on-the-go informative experience and that’s exactly what NBC News Signal will deliver.”

Erica Fink and Christine Cataldi are the executive producers for the network.

Rashida Jones, SVP of specials for NBC News and MSNBC, is the executive in charge of programming for NBC News Signal.

“People love to stay informed and constantly up-to-date and we’re seeing increased demand from advertisers wanting to connect with this passionate and engaged audience,” said Trevor Fellows, EVP for NBCUniversal digital sales and partnerships. “NBC News Signal is a strong complement to the full portfolio of options, including Stay Tuned on Snapchat, Apple News, plus our owned properties including TODAY, NBC News, CNBC and MSNBC.”