Q&A: Capturing the ‘world’ for talent competition ‘The World’s Best’ on CBS 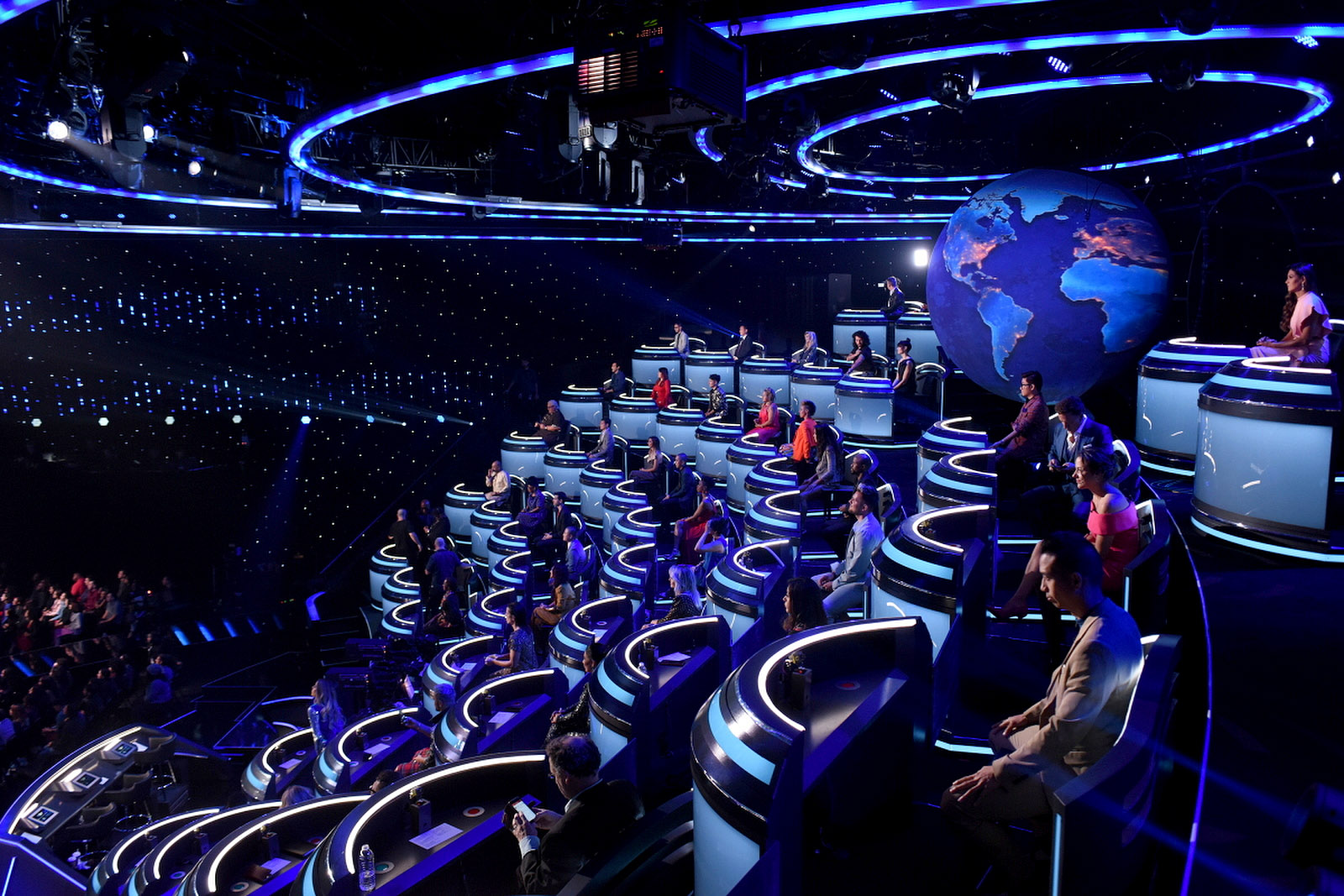 Billed as the first-of-its-kind global talent competition, “The World’s Best” on CBS called for a worldly, larger-than-life look from designer James Pearse Connelly.

The show also incorporated 50 entertainment experts from across the globe, making up the Wall of the World and helping give the show its unique look and distinction among reality talent contests.

We recently had a chance to speak with JPConnelly about the design.

Talk about the overall goals of the project

So the goal was to find a place/format for the 53 big judges plus a giant performance space to fit within a predetermined soundstage (the executive producer had a favorite soundstage from the original “American Idol” that we used).

From a visual standpoint, our goal was to make the set feel worldly and somewhat galactic (and big!). 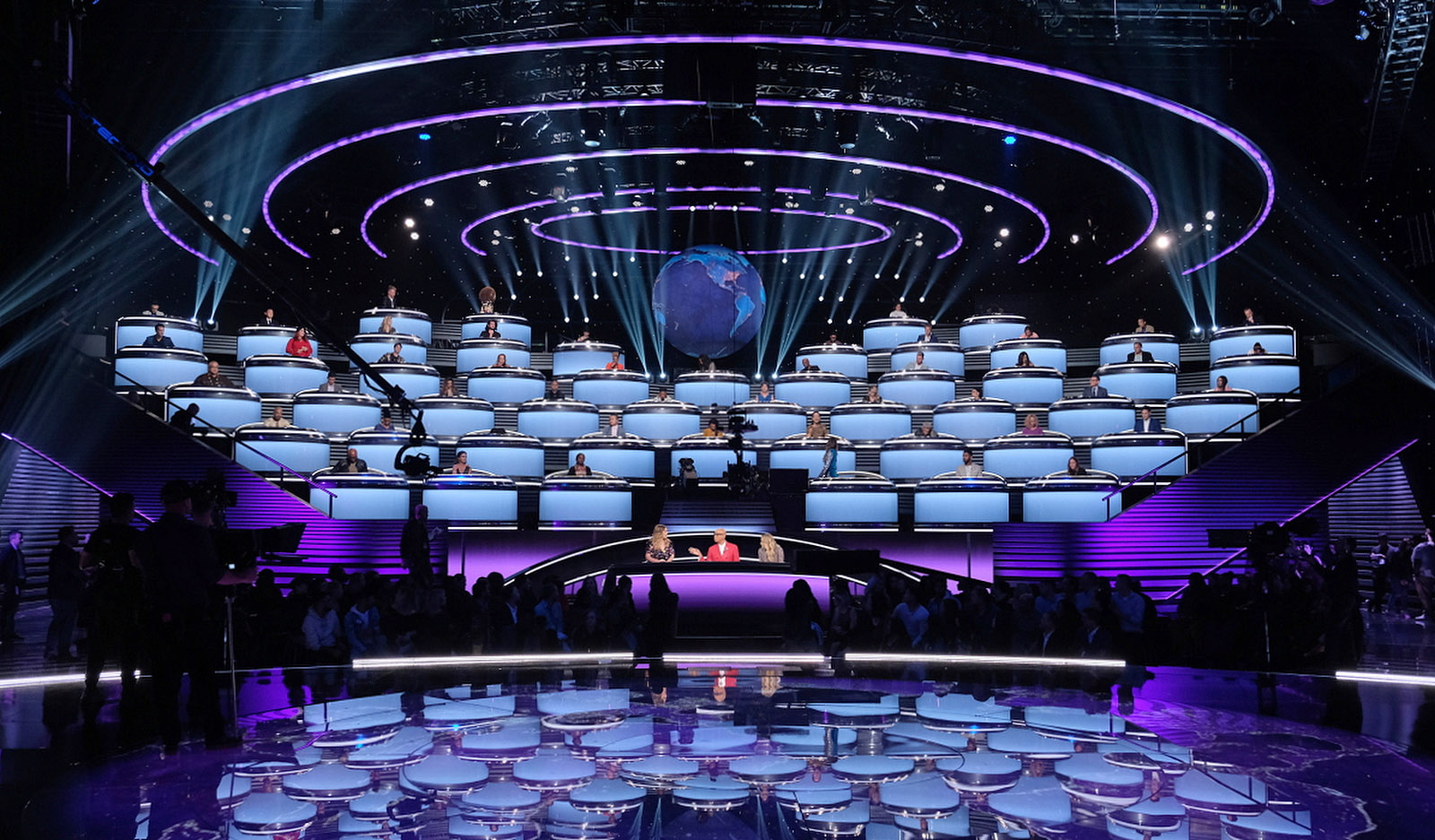 The Wall of the World on “The World’s Best.”

What challenges did the unique size/scale present?

Figuring out how to geometrically provide a visual for 50 different judges in their own voting mechanism/space, arranged in a visual picture, and determining how that related to the American judges and to the stage was the biggest challenge.

The size of the soundstage was another challenge. We had two larger footprints taking up pretty much all of the real estate on the performance side and the Wall of the World Side side! We managed to compromise on a few things, in terms of how the audience related to the stage design (we couldn’t really build any bleachers further around the space) so most of the audience is on the floor looking at the stage performances. They asked for it to feel really big. It’s “The World’s Best” – it should be big!! 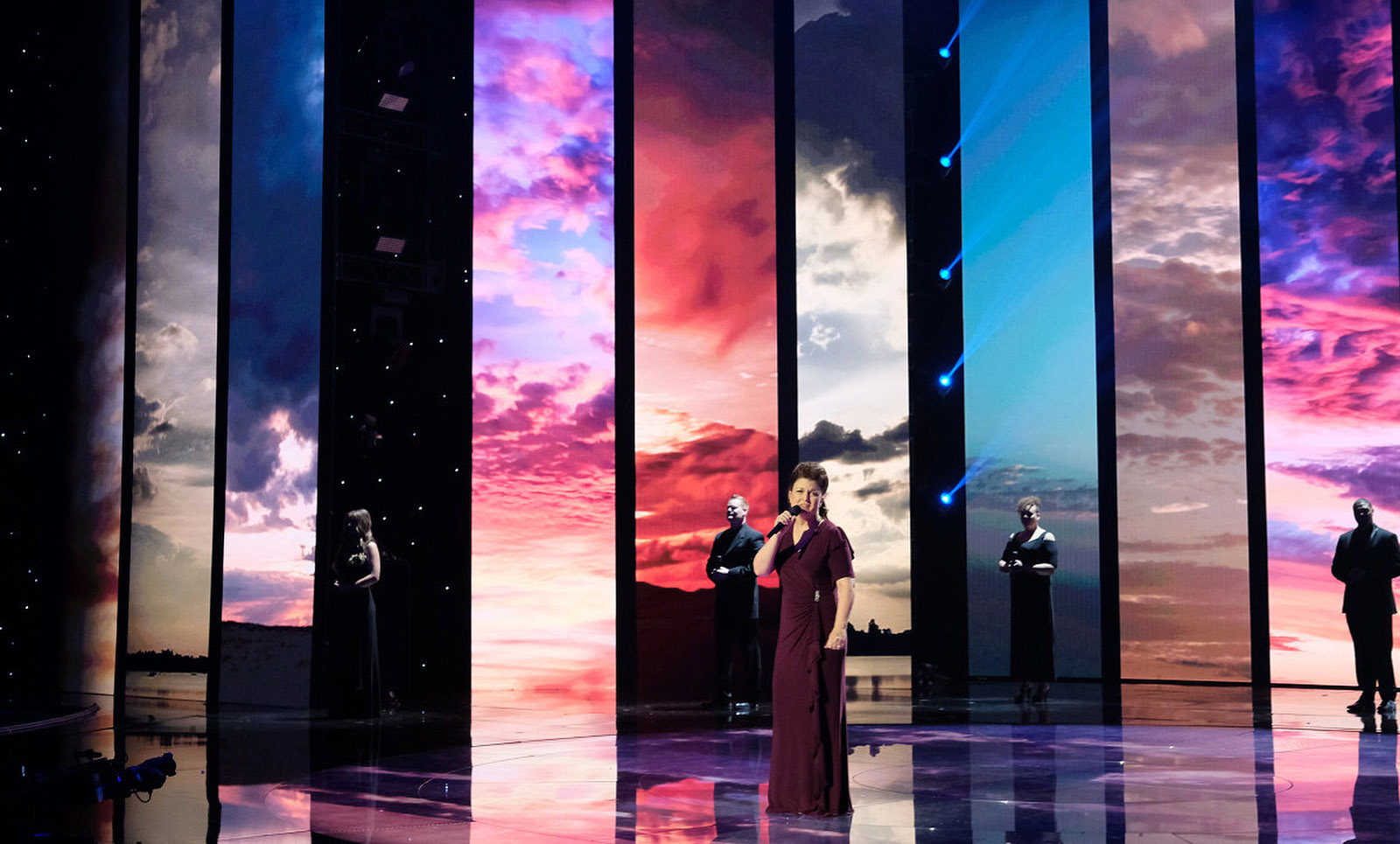 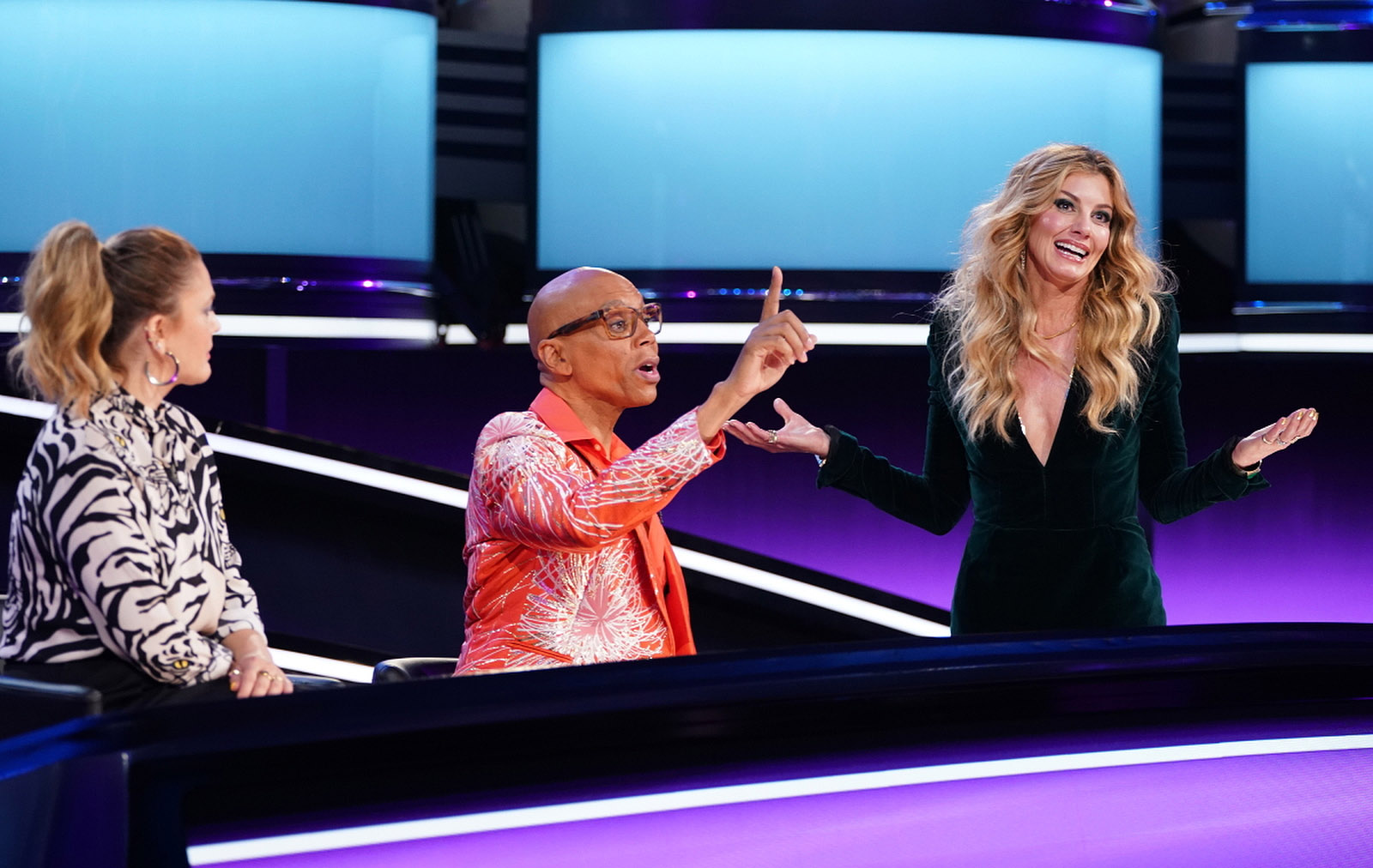 Any challenges with creating the “Wall of the World” ?

In terms of finding its aesthetic, the challenge was stacking up these judges as high as they were, from floor to ceiling, all the way up to 30 feet tall in the air. Finding that height relationship between all of them was the most challenging part. They’re all built into booths – these little pods that glow – and we needed to make sure they looked elegant in their arrangement, as well as fit into the space.

Storing scenery and crew becomes another huge challenge when your set is floor-to-ceiling and wall-to-wall. There’s really no “backstage”. We had to be creative and put everything underneath the Wall of the World. Underneath it was where so much of the crew, scenery, equipment, and other things were stored – it was just this giant mass of platforming structure.

How is the “world” captured in the design? 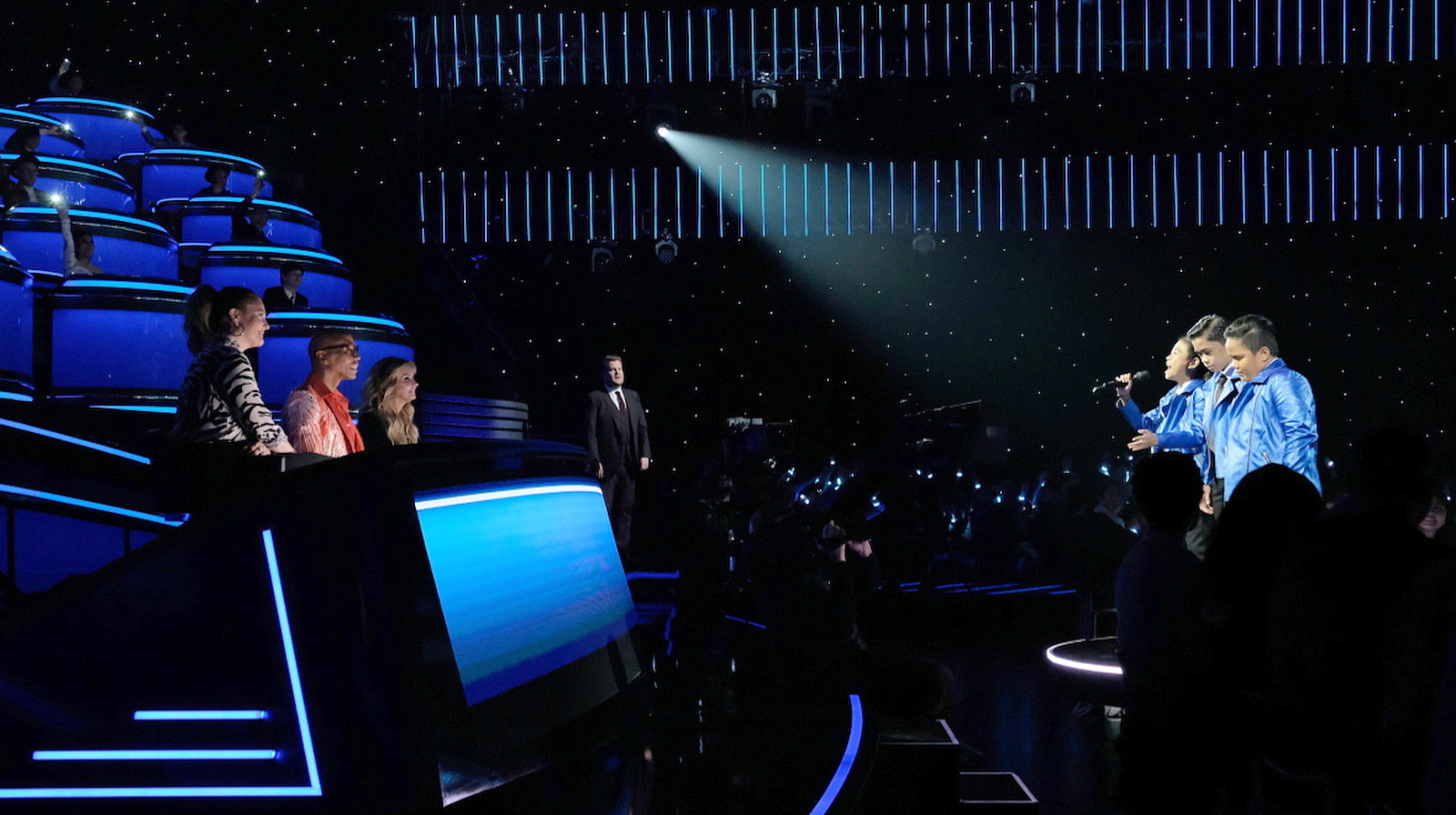 The celebrity judges of “The World’s Best.”

The initial aesthetic challenge was to make the set galactic but also chic, so our goal was really just to make space cool-looking. I started off by looking at supernova explosions and orbit paths.

The world is captured as a scoring mechanism (when the judges vote, the score is counted on a globe) that’s projection mapped on and then spun around as a spinning globe. The judges are all arranged around the big globe, and we surrounded that with the outer areas of space, initiating movement by drawing these thin orbit paths that glow with LED showing the circular motion outside the earth.

Outside of that, we basically wrapped the entire stage in stars using a huge star drape (fiber optic curtain drop). In front of those stars we added a lot of video panels, which could show a galaxy that blends in with the stars and then transform into other performance/scenic looks like a Japanese village or a fire.

So it’s 360-degree space with stars that have this magic ability – with the help of blended in video surfaces – to turn into whatever we want!

How did the lighting design enhance the project?

I really had to work with Matt Firestone from 22 degrees  (Lighting Designer) seamlessly, because most of the set when the lights are off is a very neutral color with shades of grey and different finishes (shiny and matte), and there was a lot of built-in lighting instrumentation that played with those finishes (as well as gave the environment a place to have flexibility). So, we could go from an initial home-base look of purple with blue stars that blends in with the graphics, and then immediately transform it into a red, fiery look.

There were about 2 miles of embedded LED tape in just the Wall of the World!

There were over 500 different video “blades” (a stick of LED that can take video input), and I can’t even count how many other built-in lighting instruments (built-in to the scenery with a custom box around a pre-existing fixture) that provided “glow” features throughout the scenery.