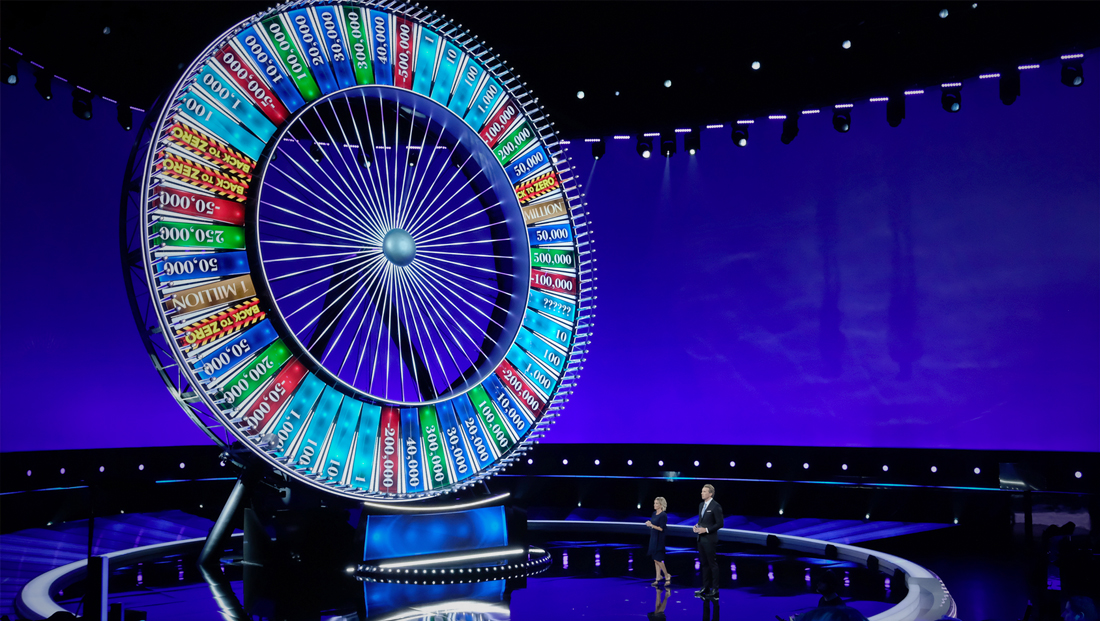 Watch out, “Wheel of Fortune” — there’s a new wheel in town.

Fox’s summer game show “Spin the Wheel” uses essentially the same gameplay centerpiece as “Wheel of Fortune” has used for decades — but turned on its side and expanded.

While the iconic “Wheel of Fortune” wheel is about six feet in diameter, “The Wheel” one comes in at 40 feet.

The wheel is so big, in fact, the show had to bring in a structural engineer, Fraser Smith of Mendenhall Smith Structural Engineers, to help plan how the wheel would be built and supported.

That was in addition to production designer Florian Wieder’s work and Noah Mitz’s lighting design.

“The Wheel” also doesn’t include a word puzzle component like “Wheel of Fortune” — though it does challenge contestants to trivia questions. 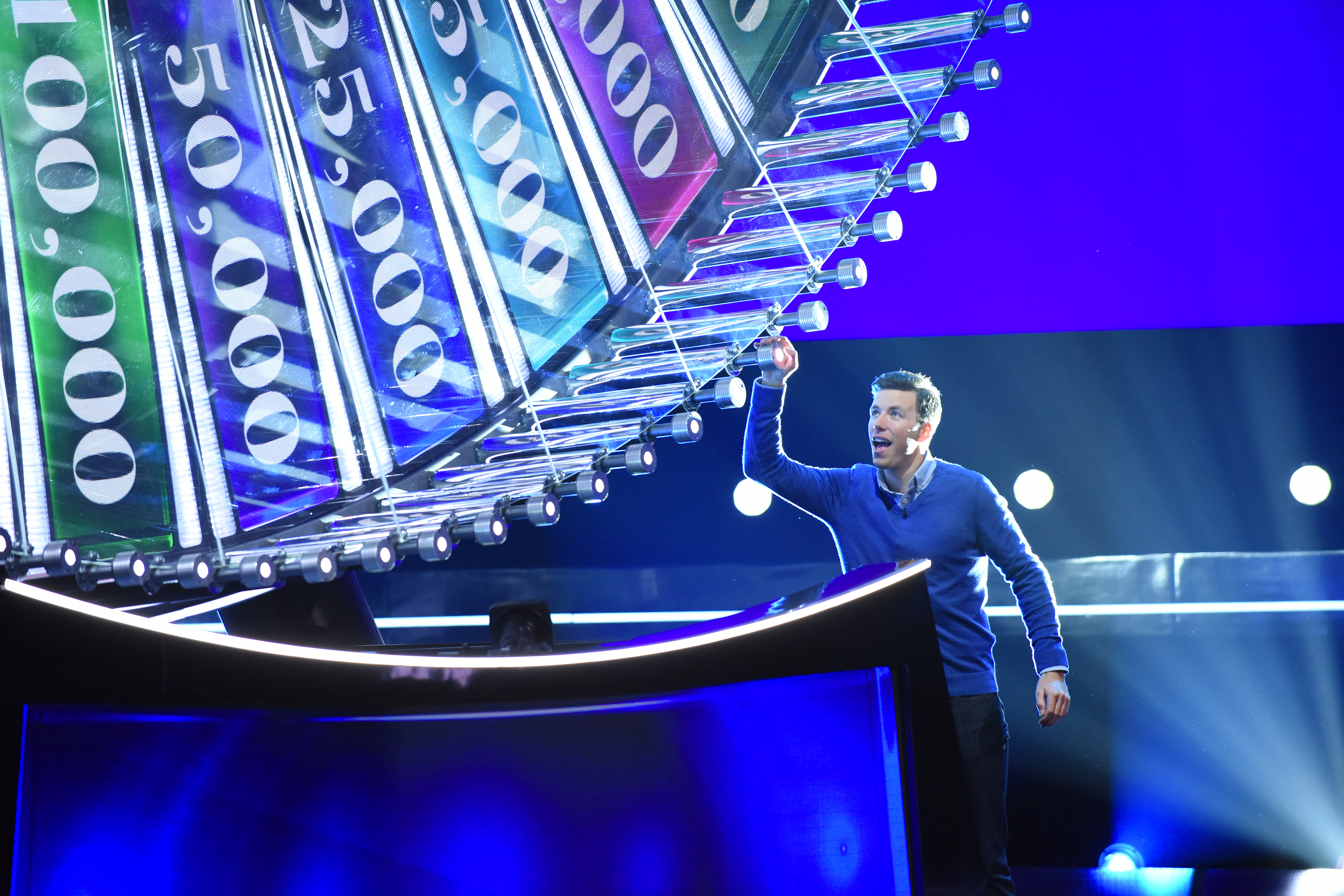 “Spin the Wheel” also has a decidedly higher tech wheel — with each wedge, which occupy the same general footprint as “Wheel of Fortune,” created from LED panels.

“Wheel of Fortune,” meanwhile, relies on printed graphics for its dollar figures, including wedges on heavy paperboard that can be lifted by constants — though the show did add a wedge shaped LED panel a few years back that could, among other things, switch between a “bankrupt” or dollar value space.

Instead of the skinny metal poles that contestants grab onto to make the wheel move, “Spin the Wheel” uses thick metal pipes with caps a bit larger than what an average person can hold in their hand — presumably this is necessary to give the contestant enough leverage to make what is likely a fairly heavy wheel move.

In case you’re keeping track, the “Wheel of Fortune” wheel reportedly weighs in at about 2,600 pounds.

Another key difference between the two shows is the metallic ball that bounces around inside the glass enclosed segments of the wheel to determine what value the contestant lands on — which can include negative ones as well as “back to zero” segments.

These panels display dollar values in a typeface inspired by that on U.S. currency, which is also used in the show’s on-screen score graphics.

While matching the money theme, however, the numbers don’t quite have the bold signature look and feel of the ultra bold ones found on the “Wheel of Fortune” pastel wedges.

Part of this could be due to the brighter, more vibrant background colors used on “Spin the Wheel.”

Because it uses a ball to determine the “end” of the spin rather than flippers, the familiar clacking noise on “Wheel of Fortune” isn’t heard. Instead, there is a sort of generic mechanical sound when the giant wheel starts moving as well as a subtle sound effect each time the ball bounces.

In many ways, the wheel on “Spin” ends up looking a bit like a Ferris Wheel — albeit not perfect vertical like most installations of that amusement park ride. 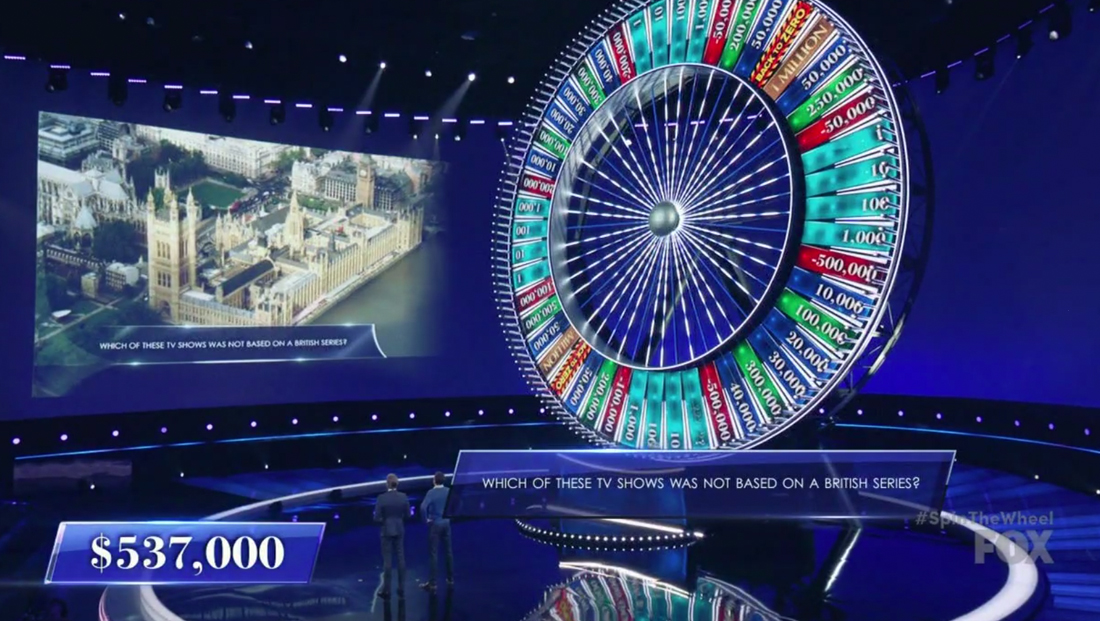 Surrounding the wheel is a huge floor to ceiling cyc that’s typically washed in a deep blue shade that matches much of the show’s graphics package.

The sides of expanses of the cyc are used to insert trivia questions and related imagery. 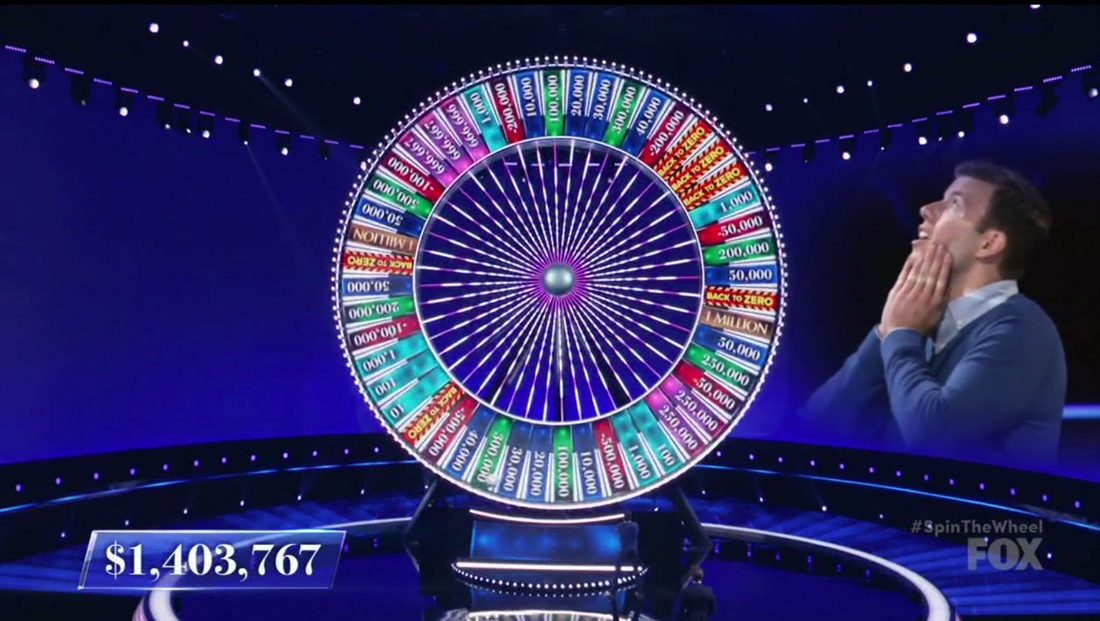 The show can also insert a live view of the contestant who, much like those annoying contestants on “Wheel of Fortune” yell at the wheel to deliver big money.

“Spin the Wheel” doesn’t shy away from the inevitable comparisons to “Wheel of Fortune” either, often poking fun of the size differences between the two — as well as the size of the prizes.

Spinning wheels of a variety of forms are popular component in both TV game shows, board games and carnival games (or even in shoe stores).

Early on in its development, “Wheel of Fortune” reportedly featured a vertically mounted wheel — though not the size or scale of “Spin.”