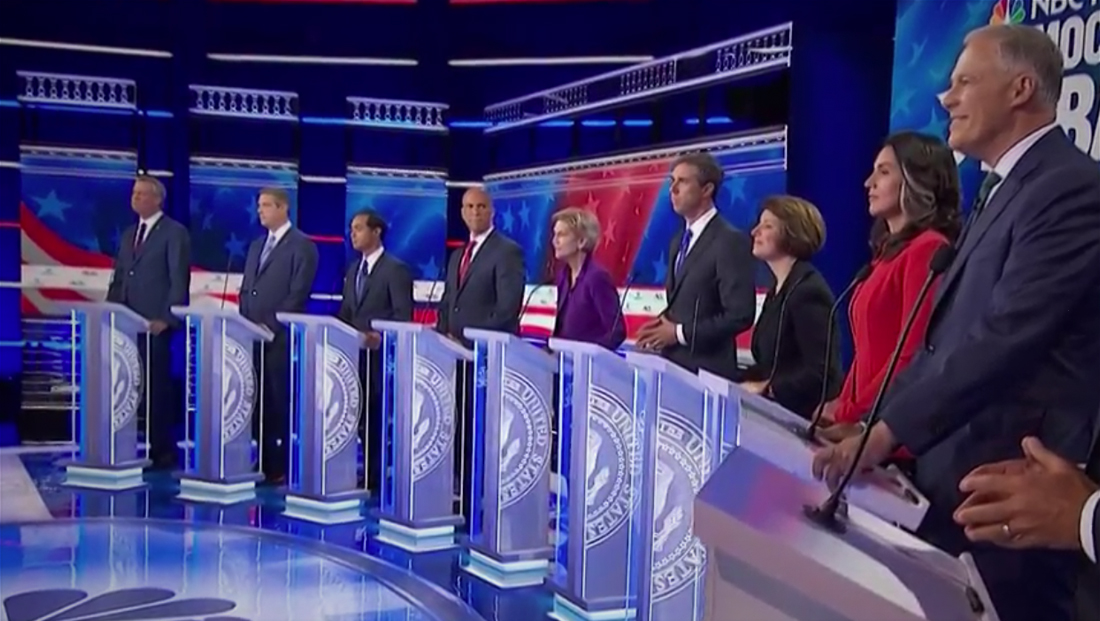 NBC News‘ cross network coverage of the first Democratic debate originated from a stage set designed to suggest the outline of the ultimate goal in the presidential race — the White House — while also incorporating technology to create dynamic looks.

Airing on NBC, MSNBC and Telemundo, the debate used the main stage in the Knight Concert Hall inside the Adrienne Arsht Center for the Performing Arts in Miami.

NBC took over the main stage in the hall, setting up nine distinct freestanding segments of Leyard CarbonLight LED video walls with edge-lit glass above and below. 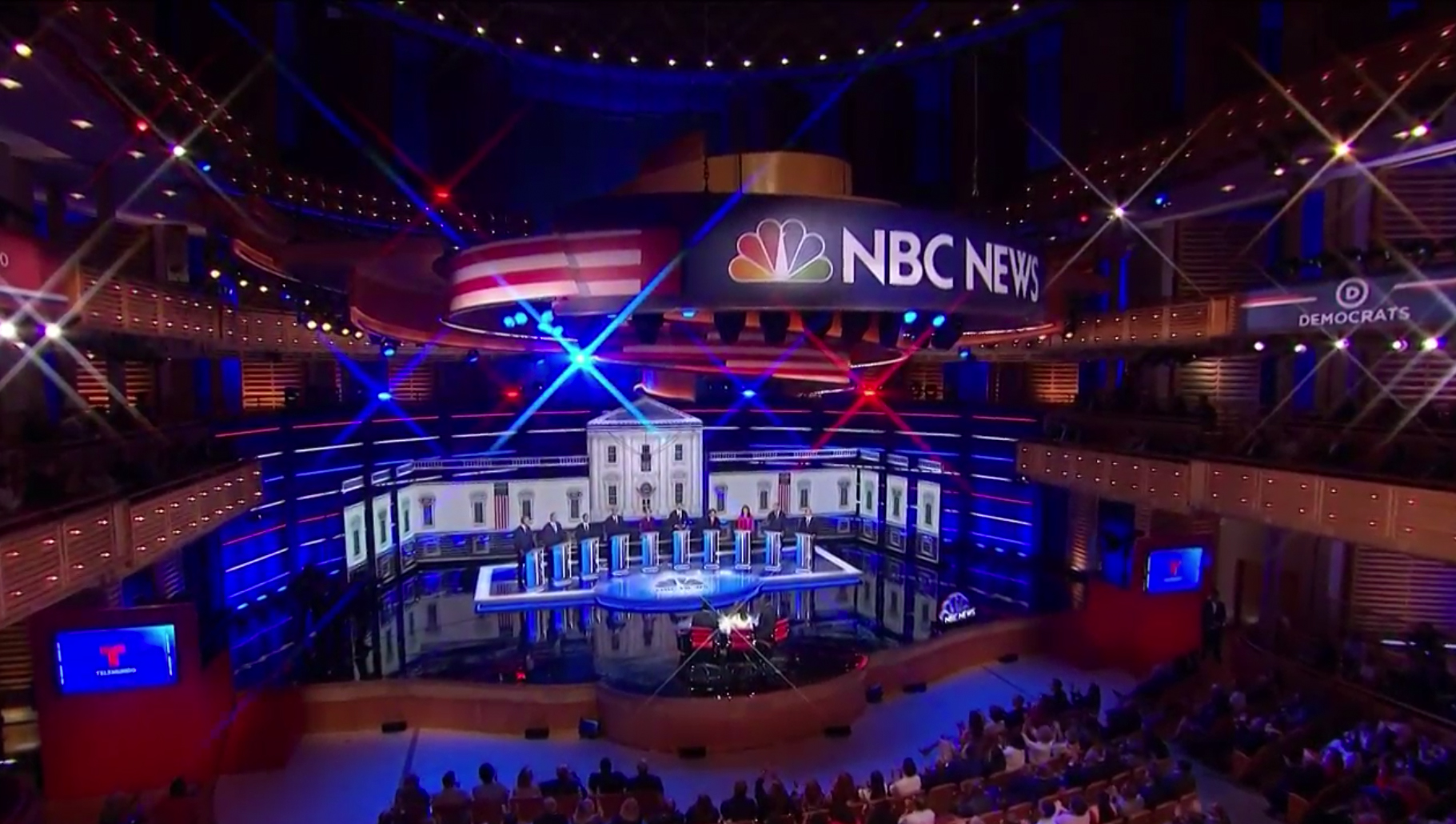 The center panel featured an edge-lit triangular cornice similar to that found on the north portico of the White House (and other government buildings) and, at times, the video walls themselves more literally channeled the White House thanks illustrations that roughly mirrored the structure’s elevation.

In the glass above and below the LED, meanwhile, were architectural details including crenelation, windows and bricks all created from what appeared to be edge-lit etchings in the glass.

NBC could change the panels in an instant, including using a red and blue animated background with a white ribbon showing the NBC News and Democratic National Committee logos that was used during most of the actual debate.

In addition, the entire array could be used to display dramatic animations when going to breaks and coming out of them. 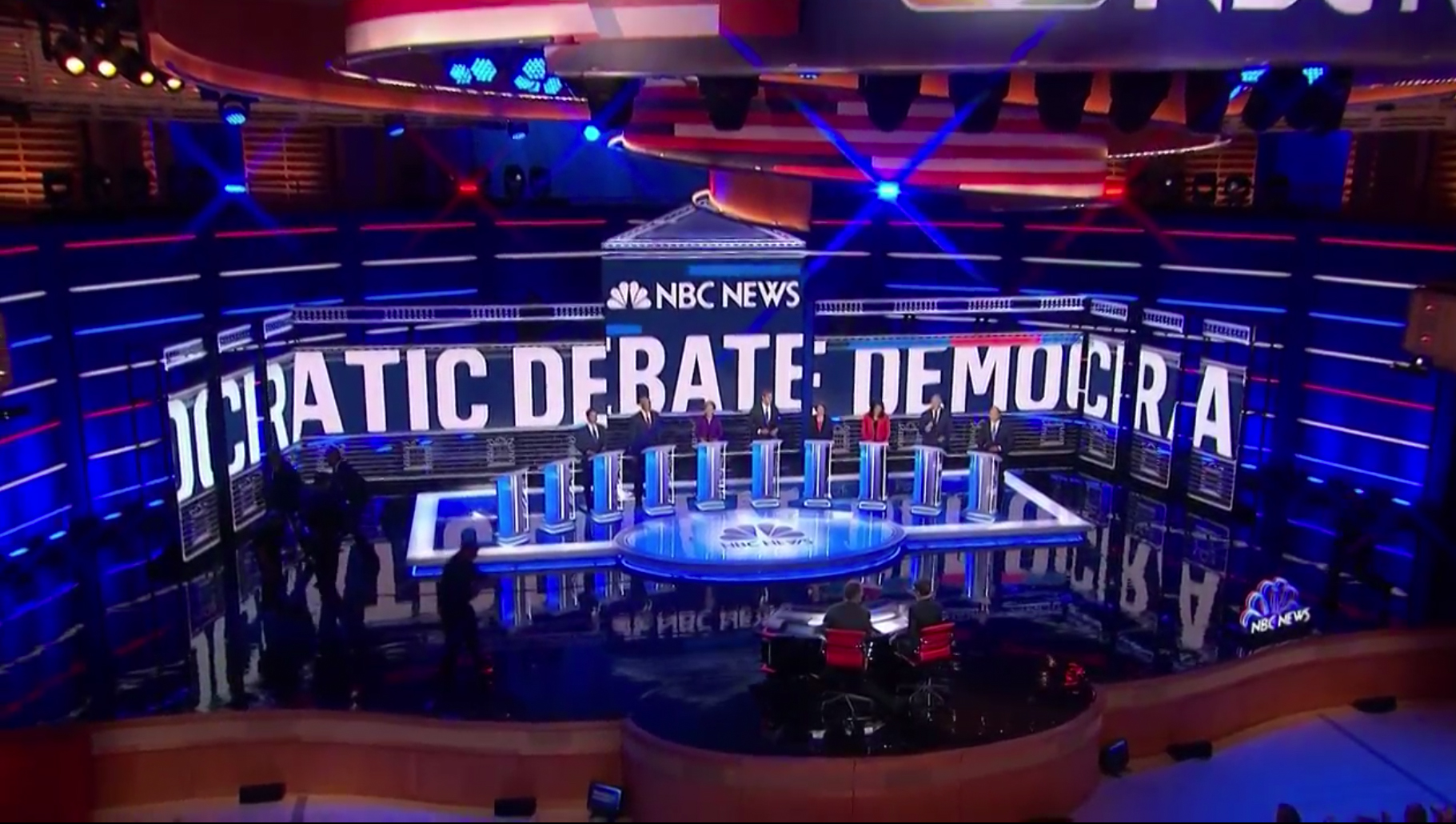 These animations included large “stripes” that would reveal oversized typography reading “Democratic Debate” that moved horizontally across the space as well as switching to an inverse color palette.

Above this, the higher center panel featured a large NBC News logotype.

Other animations included more NBC News-themed designs with the network’s news division logo and large peacocks shown on the panels with the debate logo in the center.

NBC also used customized lecterns for the debate, which featured two glass panels — one with a small portion of the presidential seal and the other with the NBC logo. 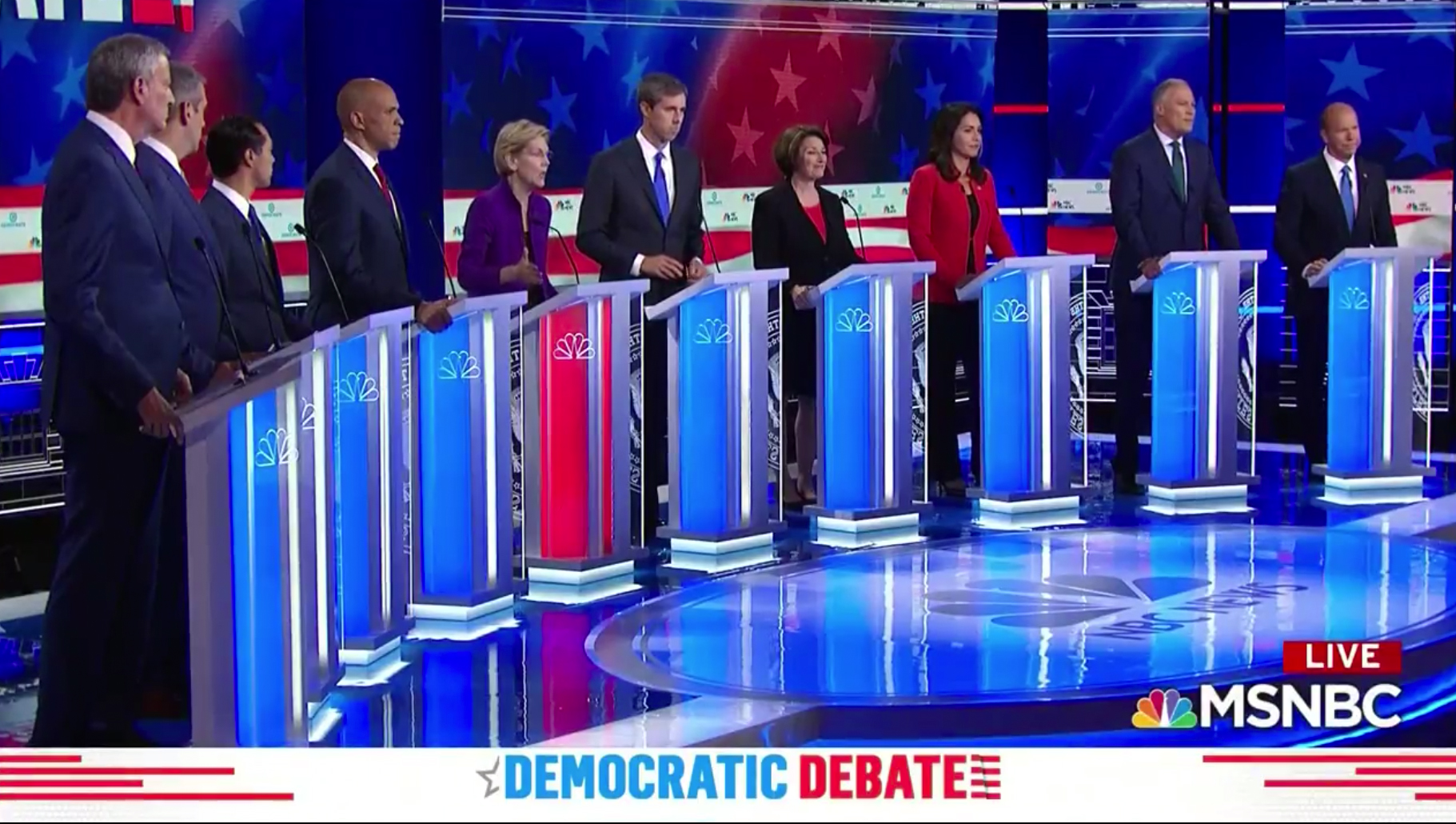 The lecterns would turn from blue to red when a candidate’s time ran out.

In addition, NBC also had a portable NBC News logo with peacock that was placed camera right — and was strategically placed so it would appeared between moderator two shots taken at the top of the debate from within the audience.

Candidates were framed fairly tightly and NBC thoughtfully inserted names from time to time to help keep track of who is who. 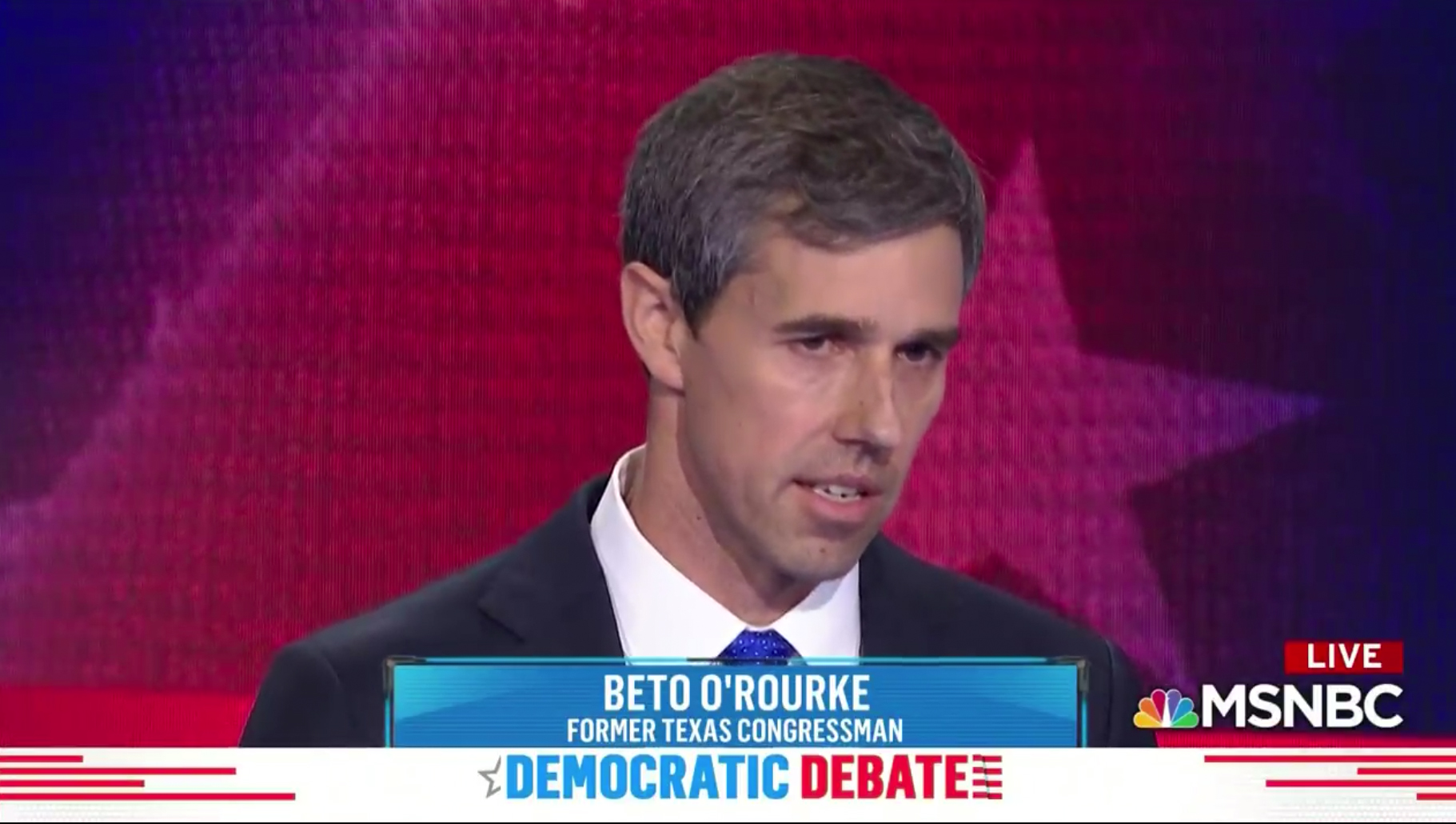 Many of the wide shots and views of moderators were captured using handheld cameras, particularly when starting out or coming out of a break.

NBC also relied on more traditional cameras tucked into gaps in the scenery to capture moderators, who had the audience behind them. 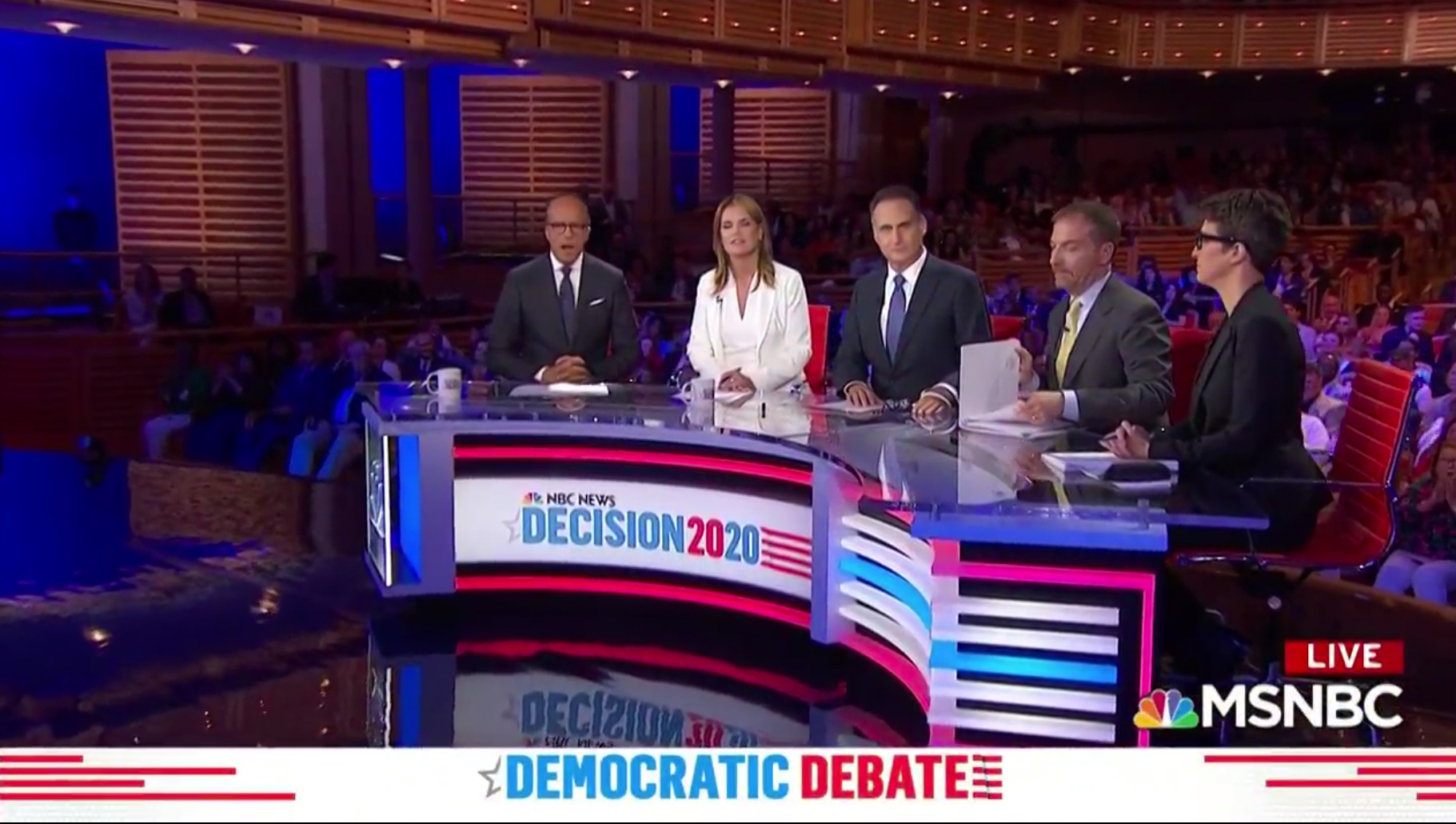 The moderators used a curved desk with glass top.

This configuration was used during both the first hour, which featured three moderators, and the second, which only had two.

At the end of the debate, all five moderators were on stage, thanks to a “docking” desk segment fronted with internally lit red white and blue stripes.