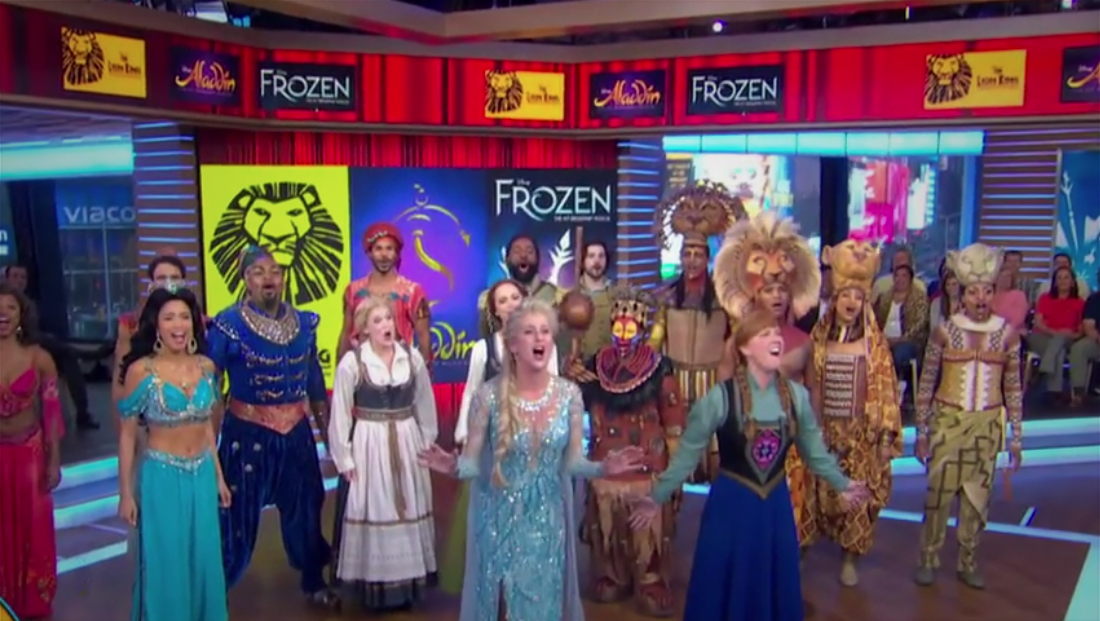 ABC News‘ morning news program “Good Morning America” celebrated 20 years broadcasting from Times Square with a look back at 1999 and topped off with a musical extravaganza from Disney musicals.

“GMA” first moved into the multi-level Times Square Studios Sept. 13, 1999 after a period of stagnant ratings.

Earlier that year, Charles Gibson and Diane Sawyer had taken over the broadcast in a talent shakeup.

The network built a homey set on the upper floor of the studio nearby an anchor desk situated to get a dramatic view across Times Square.

On the outside, Disney’s Imagineering team designed a facade featuring multiple intertwining LED ribbons, a large screen and windows set at a variety of angles designed to take advantage of the views of Times Square.

Downstairs, meanwhile, was a recreation of a “subway station” complete with rear projection screens that could be used to present weather forecasts.

This space also had special sections of windows that could detach from the building and be moved out of the way, creating an open air style space that members of the public could be brought into.

The move was widely seen as a way to replicate the windowed studio rival “Today” uses on NBC, though with its own twists. The trend would continue later that year when CBS’s renamed morning show, “The Early Show,” debuted from a windowed studio in the General Motors Building.

CBS would abandon the concept in 2012 when “Early” was canceled and the timeslot reverted back to the “CBS This Morning” name, albeit with a different format.

The show moved back to the CBS Broadcast Center’s Studio 57, which was originally planned to have a windows overlooking the street but, due to structural issues, never got more than a few smaller sets of portals.

To celebrate its 20th anniversary in Times Square, “Good Morning America” played archive footage from over the years, including the requisite laughing at everyone’s hairstyles and clothing, though none of the anchors who appeared on the show 20 years ago are still on it today.

Old clips from each anchor’s early days on the show were also aired, however.

Then, in true ABC-Disney fashion, the show featured three back to back performances featuring modified versions of numbers from Disney produced Broadway musicals — “The Lion King,” “Aladdin” and “Frozen.”

The genie from the Disney musical '#AladdinBroadway' turns '#GoodMorningAmerica' into 'Good Morning Agrabah' during a performance pic.twitter.com/Tb8KNafUUM

“Aladdin” got to have a bit of fun with the “GMA” set — with actors portraying the genie and Aladdin joining George Stephanopoulos, Robin Roberts and Michael Strahan at the anchor desk that was, thanks to a bit of “genie magic” turned into “Good Morning Agrabah” complete with a violet and gold color scheme.