“Squawk Box” first moved to Times Square in early 2017, broadcasting from Studio B on the second floor.

That November, it moved back down to the first floor to the space dubbed Studio A.

The show went back upstairs again in 2018 to make way for more updates on the first floor.

CNBC now rounds out its game of musical floors by returning to ground level once again. 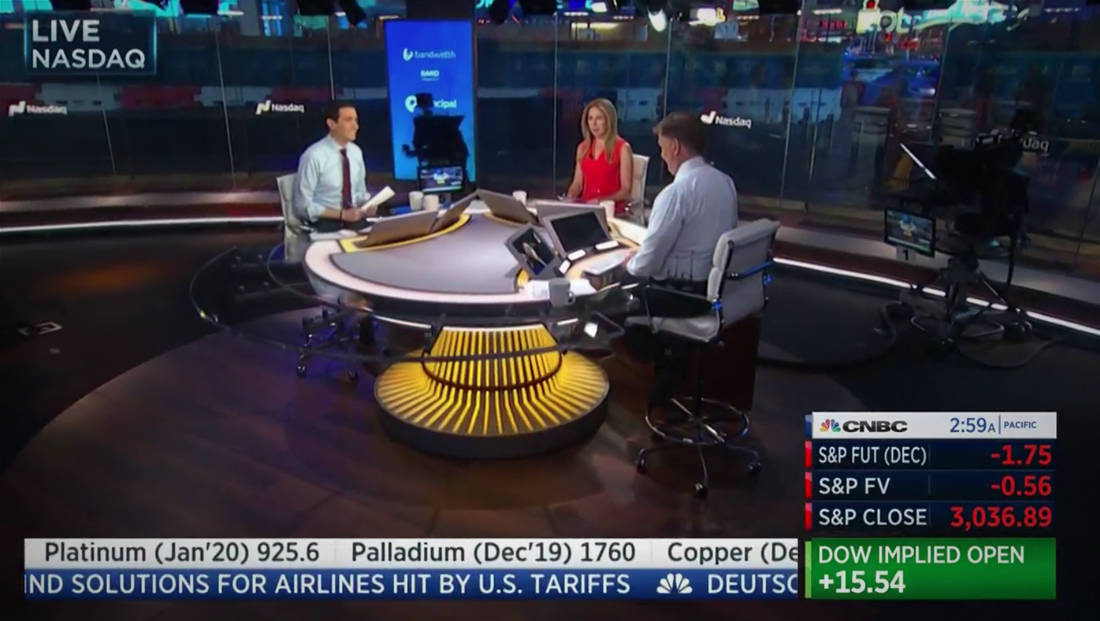 Along with the move, the show has also returned to its “in the round” style anchor desk, rather than the more traditional bowed ones it’s used since moving to Times Square.

The desk itself is now circular with an inverted “funnel” of LED ribbons that stem up from the floor.

Hosts Joe Kernen, Becky Quick and Andrew Ross Sorkin all now sit in front of two monitors that stick out of the top of the desk.

Going with the in the round theme, cameras now show up on screen around the anchor desk.

Beyond that, the show mostly relies on the view of Times Square as its background — save for two vertical video panels that cover structural pillars that interrupt the curved glass.

Small Nasdaq logos also show up on the glass behind anchors, though the show has always sported references to that.

There are also two wild freestanding video panels in the space as well as the lower portion of the large curved video wall, which is fed branded graphics in addition to key stock data.

It’s not immediately clear if there are options, such as frosted panels, to obscure the view of Times Square if needed — though the show likely could also rotate the desk and use the video wall as a primary background if needed.

The show’s teasers no longer feature a wide view of one of the hosts on screen — with the anchor desk in the background — but instead uses fullscreen video with a glassy sidebar reading “Squawk” and text banners below.

That glassy look, which is used across CNBC, continues in the new open, which uses morning views of New York City and oversized renderings of “Squawk” and its letters, including a dramatic interior view of the World Trade Center Transportation Hub’s angled wall tied to similar angles in the “W.”

The new open also drops the announcer but adds more prominent shots of the hosts which also using an urgent sounding backtrack.

Previously, the show typically used a clip of popular music at the top of the show, though there was a musical bed under the teases.

The show’s logo has also dropped the three rings on either side of “Box,” with its name appearing on one line in the open between to square brackets and backed with an oversized, semitransparent “X.”

Other lockups of the logo split the logotype into two lines. The logo has also been updated to use thinner text for “Box” than before.

In the past, “Squawk Box” has also originated from the network’s two headquarters, first in Ft. Lee, New Jersey and then Englewood Cliffs as well as a street level space in Rockefeller Center along the Avenue of the Americas.

In addition to “Squawk,” CNBC’s “Fast Money” also originates from Time Square, though it’s not immediately clear if it will be moving spaces or not.

Both levels of the main MarketSite space are designed to be flexible. They’re used for private events as well as have been used for special programming on other networks, including during CNN election coverage in the past.

The space is also available for live shots for financial reporters from other networks to use during select times. These typically originate from the second floor balcony that overlooks the curved video wall, though the first floor can also be used for “walk and talk” style segments.

Networks also have the option of having the video wall display specific stocks and branding graphics during live hits as available.