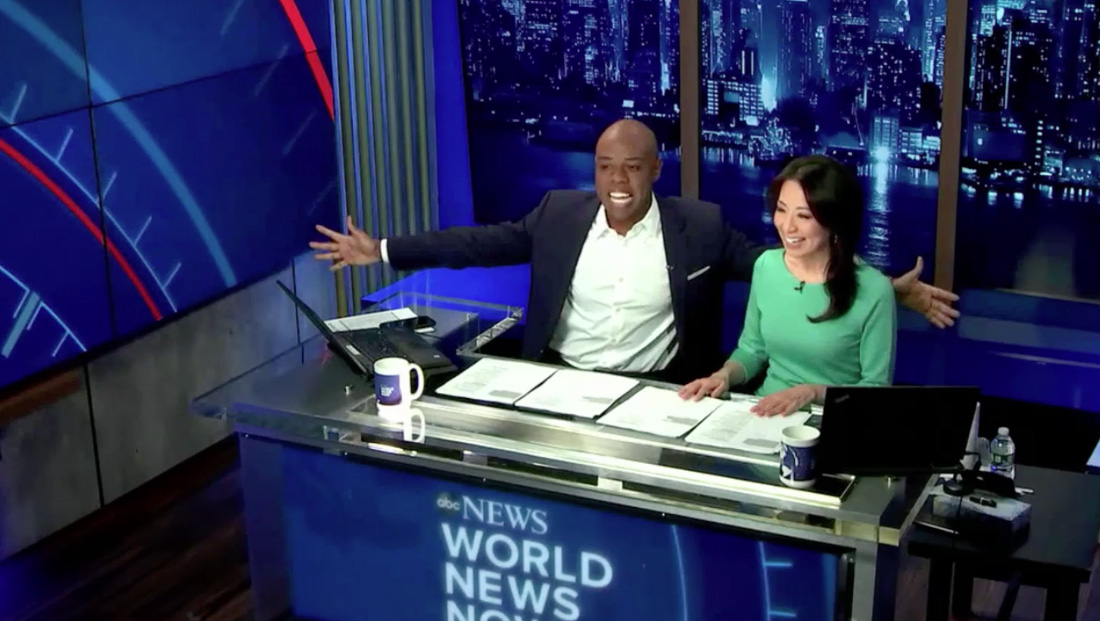 “ABC World News Tonight” weekend editions on Feb. 1 and 2 both originated from a temporary set that was shot very tightly and, while a world map background in the show’s familiar motif was shown behind anchor Tom Llamas, the show switched to using boxed OTS graphics instead of the video wall.

It’s not immediately clear if weekday “Tonight” broadcasts will use the same setup.

Meanwhile, “World News Now” moved to the small set originally designed for streaming service ABC News Live back in 2018, Monday, Feb. 3 for “a few weeks” as a “major” studio reconstruction project is finished.

The size of the temporary set was the subject of some friendly banter and local news jokes on Monday’s broadcast.

The space has been updated with a new anchor desk.

ABC’s PR department tweeted a photo of the set, with ABC News Live graphics, along with a note to tune in to the new 7 and 9 p.m. streaming newscasts it previously announced starting Feb. 10.

Back on Friday, Jan. 31, David Muir still anchored from the larger space with full size anchor desk and two temporary video walls brought in over the past few weeks — presumably to cover construction going on behind the scenes.

Then, in December, the shows shifted to using the same desk but with a different primary video wall.

“Tonight” continued to use the same style graphics on the video wall as it did on the larger, curved version that was there previously, though the show’s open was shot tighter.

“Now” frequently fed a video loop of the small work area that was camera left of the main video wall on the same unit.

Meanwhile, the network also brought in another video wall, placed camera left, that also frequently showed a repeat of the same video loop during “Now.”

ABC News officials declined to comment on the changes.

However, industry insiders had previously told NewscastStudio that a major construction project was under way in TV3.

ABC’s Sunday morning public affairs program has been using the “Good Morning America” studio in Times Square for New York based shows since the changes started.

The network has also been using that same space to anchor most special reports, whereas TV3 was often used previously.

Speaking of “GMA,” that show itself got a surprise makeover March 2019.

The network used the upstairs studio in Times Square on the Friday before the debut and then finished up work over the weekend for a Monday morning debut.