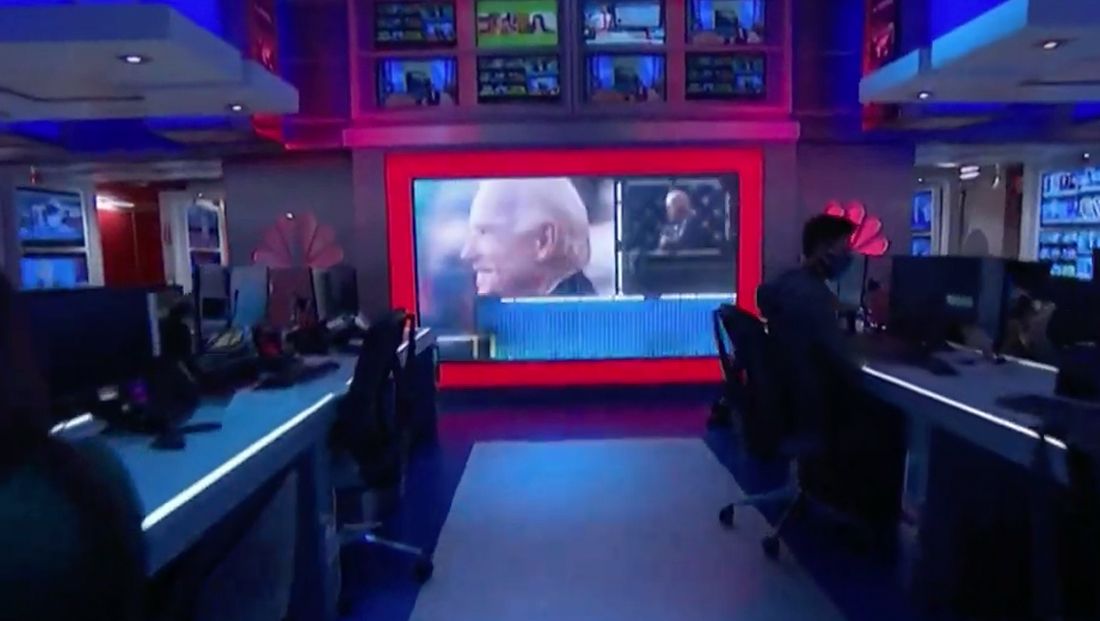 MSNBC’s coverage of the 2020 Democratic National Convention has been kicking off each night with an elaborate opening segment that gives viewers a whirlwind tour of Studio 3A in Rockefeller Center.

When the network kicks off its 8 p.m. eastern preview coverage anchored by Rachel Maddow, Nicolle Wallace and Joy Reid in studio it has been offering a rundown of what to expect each night.

While Maddow outlines the events, handheld cameras positioned throughout Studio 3A walk through an elaborate series of on air movies that typically start in one location and then quickly move to one or more of the in studio monitors or video walls.

With the plethora of LED surfaces and scenic elements in the space, MSNBC has plenty of shots and moves to pick from.

Everything from the spiral staircase and the backlit wall with smaller monitors installed over it to the nearby stacked video walls have been used.

The NBC peacock logos embedded in the walls and even the sliding wall that can cover the windows into the “Nightly News” area of 3A have been leveraged, along with wild monitor carts that can be positioned strategically around the space.

In addition, specific parts of on set pieces, such as the glass edges of scenery are also incorporated into select shots.

MSNBC also mixes in flashes of light and “de-blurring” effects on the on-set graphics timed to roll when cutting from one camera to another, an elegant way to “hide” a jump cut.

In general, the concept is similar to what NBC has been using on “NBC Nightly News” during convention coverage, though those moves aren’t quite as elaborate or fast.

Below is a playlist of MSNBC convention coverage that includes the full sequences of camera moves and shots used.