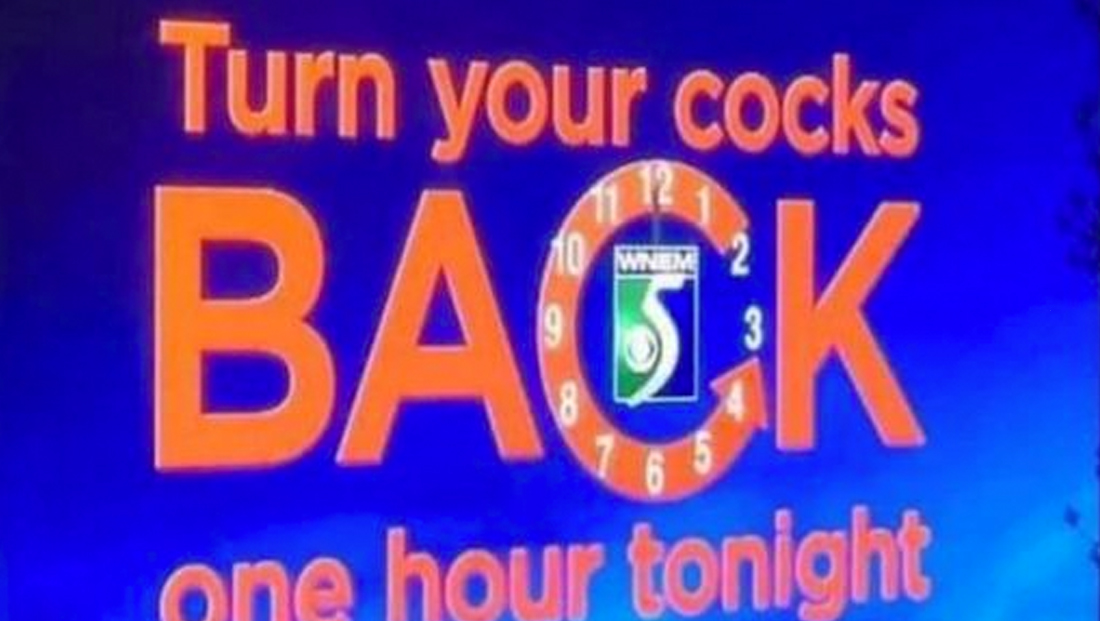 WNEM, the CBS affiliate licensed to Bay City, Saginaw and Flint, Michigan, aired a helpful reminder about daylight saving time Oct. 31, 2020 — but sharped eyed viewers got more than they bargained for.

In a Facebook post, the station wrote: “We regret the unfortunate typo in a spot for changing clocks this weekend. We’ve taken steps to address it” accompanied by a different graphic with, thankfully, the correct spelling of “clocks.”

The incident sparked a variety of responses on social media, including some speculating that someone might have been fired. Like many businesses, TV stations typically don’t comment on personnel matters.

“Are you hiring? I’m a desint proofe reeder (sic),” wrote one commented.

The image quickly went viral and also began popping up on as responses and comments on the station’s social media accounts.

Others pointed out that the graphic itself, in an effort to use the “C” in “back” as a counterclockwise arrow used a bit of artistic license.

The circular arrow started just before the “2” on the clock face — which is the time of 2 a.m. used to “fall back” (or “spring forward”) as it where.

However, the arrow ended just before the “3” leaving some wondering why the station appeared to be suggesting that at 2 a.m. it would become 3 a.m. (or, depending on how you read the graphic, even 4 a.m.).

The “C” arrow could have by an attempt to represent either what would happen with the minute hand if a clock were to “run backward” or just the overall idea of time “going back.”

The station’s probably now regretting all the time (pun instead) it put into attempting to turn that “C” into a clock and arrow (complete with its logo in the middle) and maybe proofread the graphic once or twice.