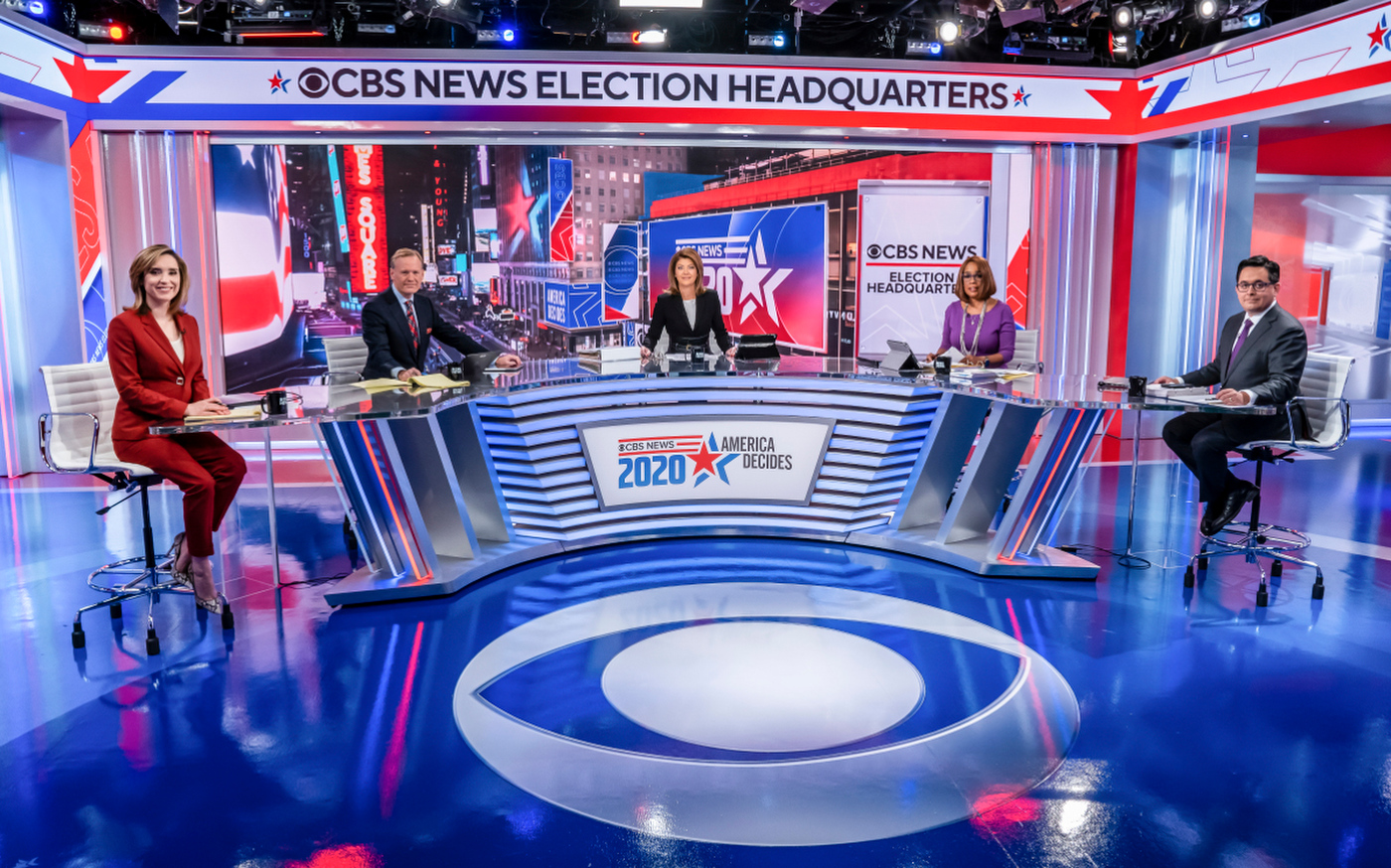 Borrowing the iconic studio and former home of MTV’s “Total Request Live” (TRL), CBS News’ election coverage will forgo Washington and instead come from the crossroads of the world in Times Square.

“When big news events occur, people gather in Times Square, NYC. That holds true, even in a year as unprecedented as 2020,” said Jim Fenhagen of Jack Morton Worldwide, the set’s designer.

The space inside the ViacomCBS headquarters at 1515 Broadway – known as One Astor Plaza and also home to Disney’s “The Lion King” musical – saw significant broadcast infrastructure upgrades for the relaunch of “Total Request Live” in 2017, including taking over existing retail space to expand the studio’s footprint.

That expansion has allowed CBS to capitalize on the studio to safely bring coverage to viewers with a set that can accommodate a full cadre of hosts and analysts, including Norah O’Donnell, Gayle King, Margaret Brennan, John Dickerson and Ed O’Keefe.

For the design, Jack Morton Worldwide used a grid to divide the space into specialized areas for different aspects of election night, such as an area for exit polling or data analysis. 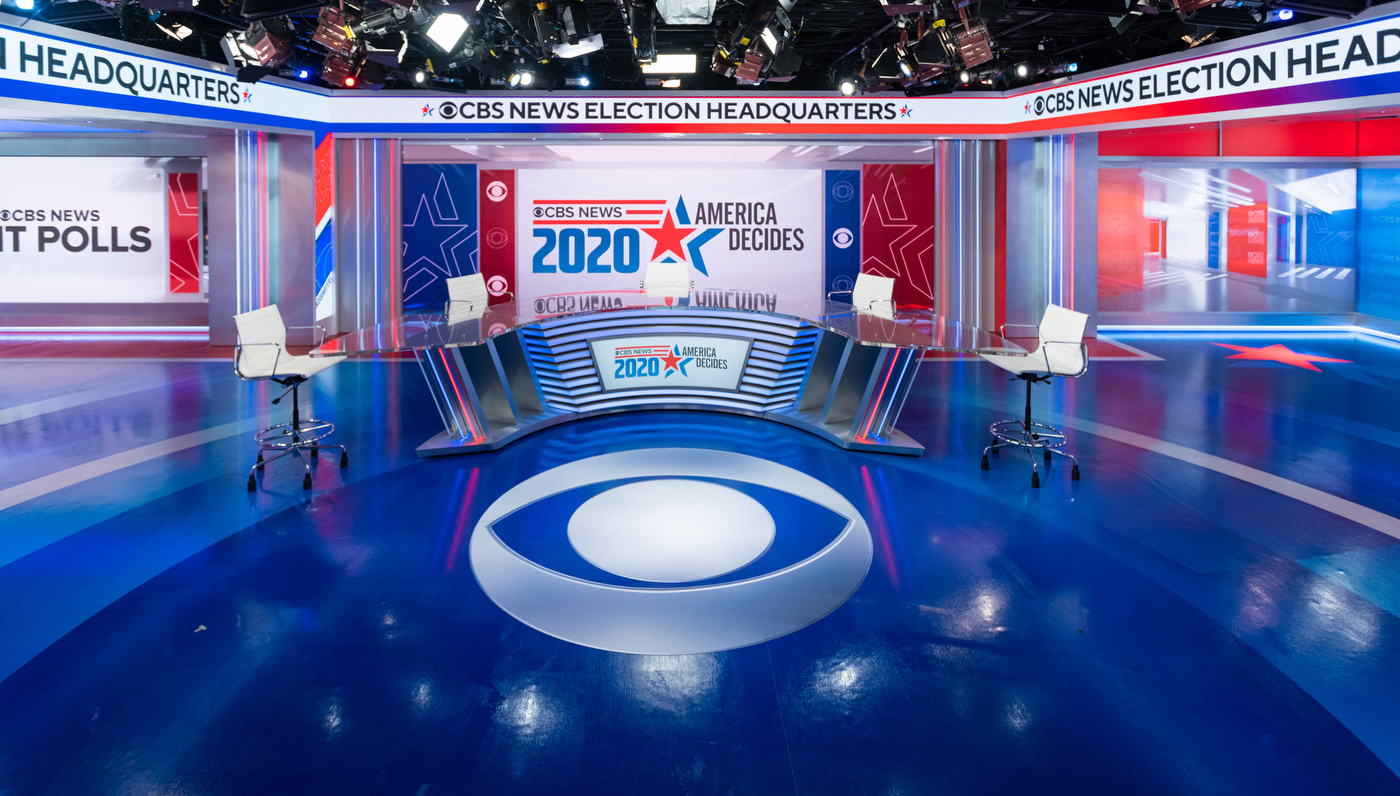 “At the studio’s heart is the main anchor position, where CBS News journalists will lead the coverage of the developing story of the 2020 election,” notes Fenhagen. “This central position has a large LED display as its primary background, with an immersive view of an election-themed Times Square.”

That view, of course, has been tweaked to showcase CBS-branded graphics from the network’s election look, designed by Troika, avoiding a hodge-podge of advertisements and potential competitor logos. 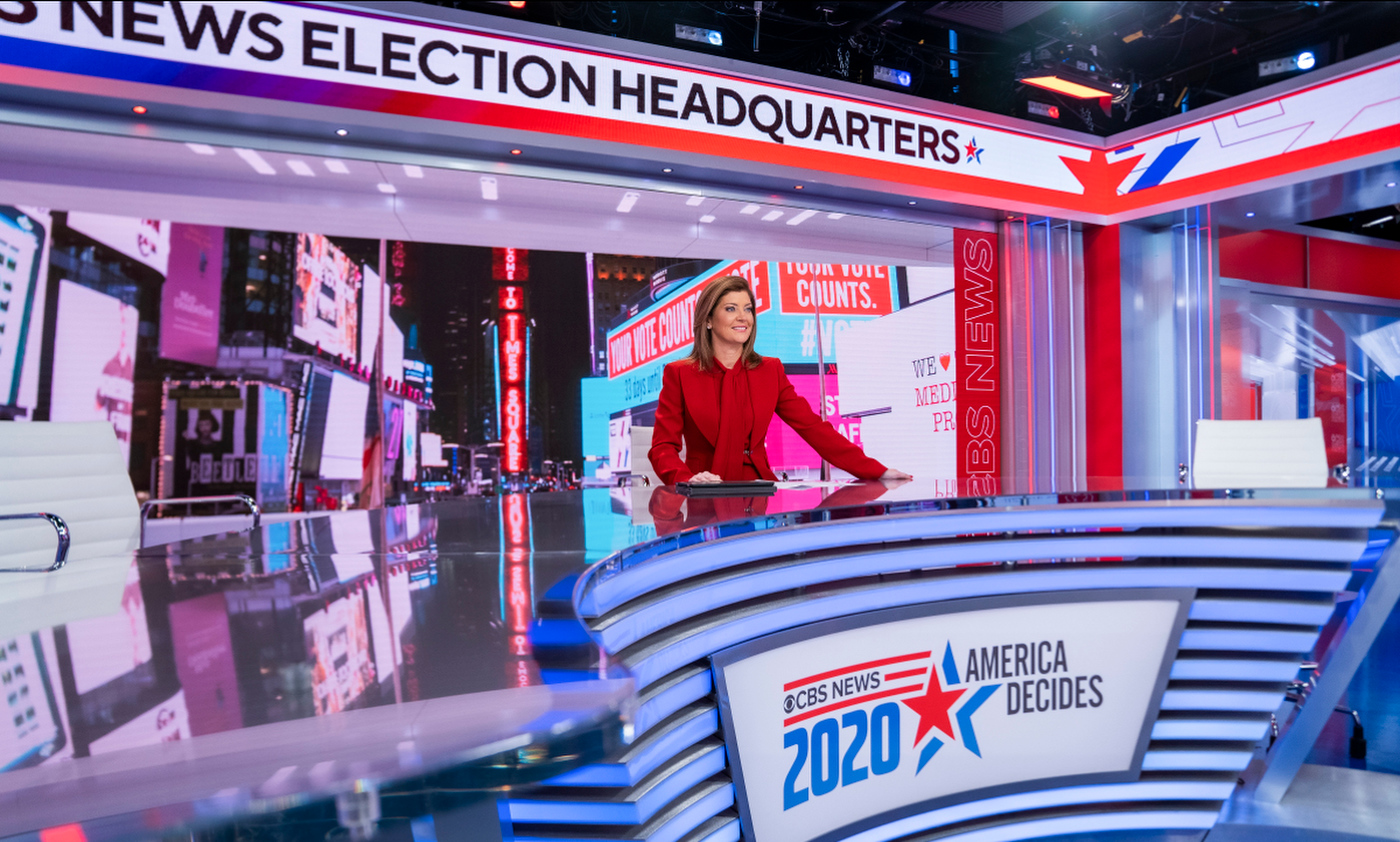 “We’re empowering our top political journalists with the latest data visualization and storytelling tools to bring as much clarity as we can to this election,” said Susan Zirinsky, CBS News president and senior executive producer.

“A rich red, white and blue graphic floor flows throughout the studio, uniting all of the separate spaces into one composition. The floor is designed to effortlessly motivate AR extensions to the scene,” added Fenhagen.

The CBS eye in the center of the studio, cradled by the main anchor desk, will showcase electoral maps and states in play, while stars on the floor will anchor augmented reality representations of United States Congress and the balance of power.

Tying the studio together – along with the floor graphics – are a series of archways formed by LED tickers. These portals frame the studio and adjacent broadcast spaces. 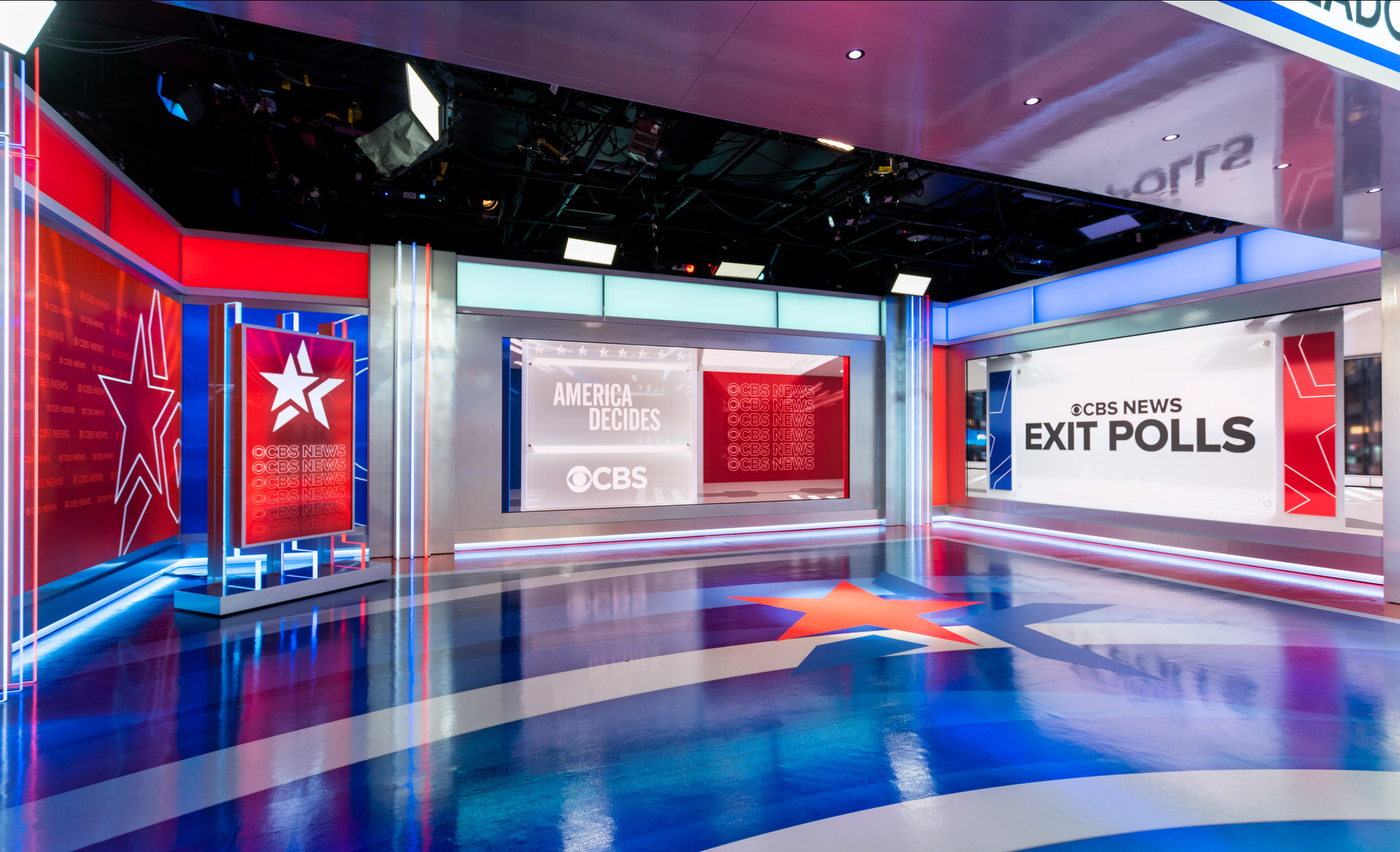 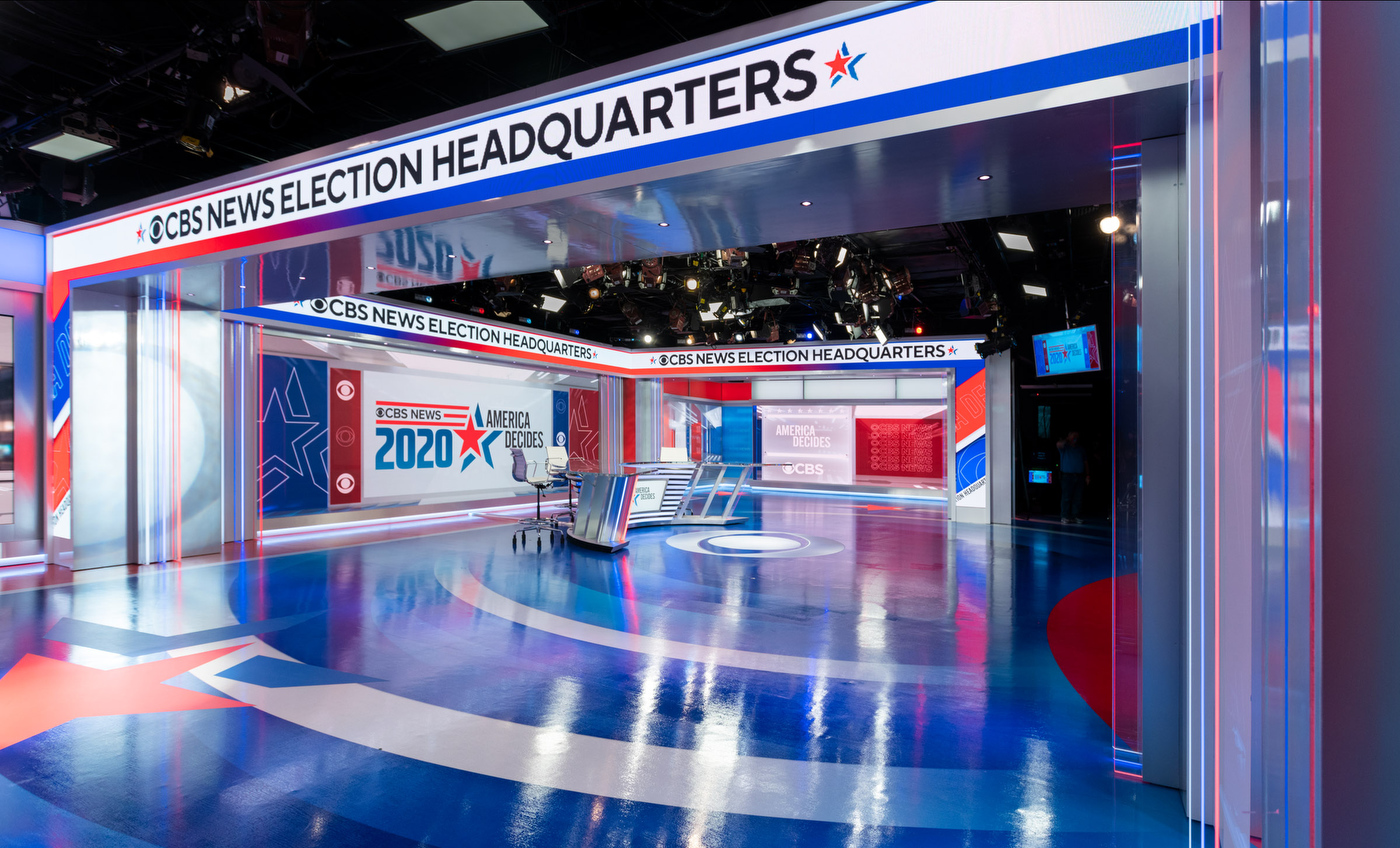 On the left, imagery of results coming into the Election Center will be showcased while a mobile monitor display will allow for interaction with data and remote reporters. On the opposite side of the studio, the state of the race will be analyzed.

The studio space also includes the Decision Desk, with workstations and a touchscreen to review county-by-county results from across the country.

Overall, the entire studio is connected visually to CBS’s Washington bureau studio through its use of edge-lit acrylic and reflective metal surfaces.

To facilitate the large-scale production, CBS has placed graphic teams and rendering engines at both its 57th Street broadcast center and in Times Square. Overall production control for the broadcast will come from the main CBS Broadcast Center with the on-site control room available as a backup.