‘Today’ gains a video wall, appears to lose the ‘Orange Room’ in Studio 1A updates 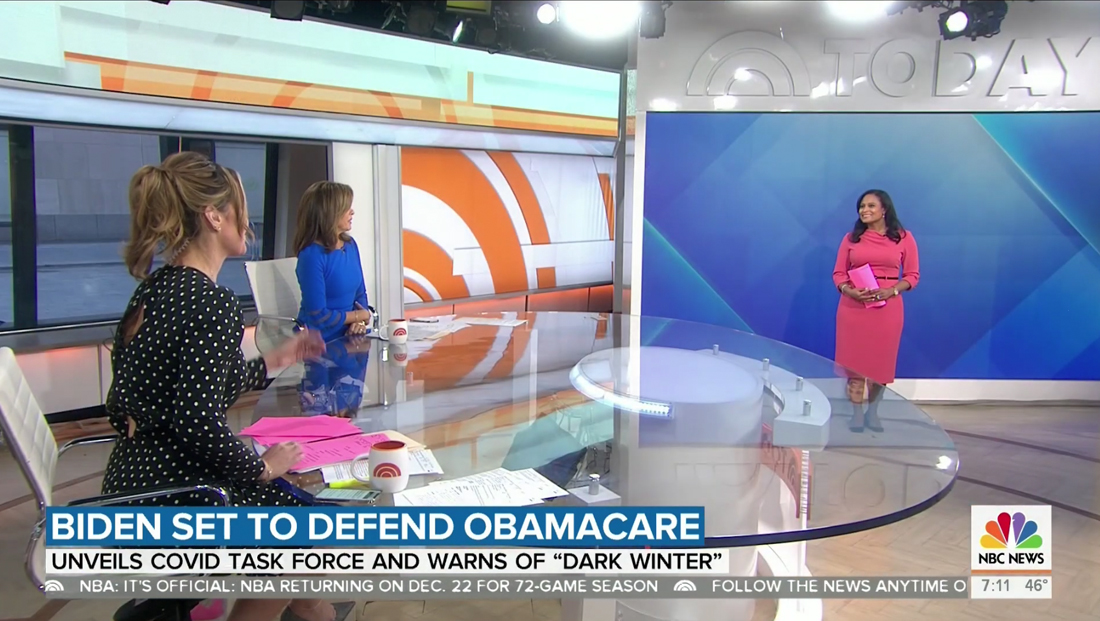 NBC News‘ “Today” returned to its windowed, corner home base Nov. 10, 2020, after having its home, Studio 1A, converted in the network’s election center — but some parts look a bit different.

Note: This story was updated Nov. 11, 2020, with some additional imagery and details as well as a minicut of the video wall in use on its second day on the air.

Perhaps most noticeable, at least at the top of the show, is that the network has moved the large landscape, mobile touchscreen unit between co-anchors Savannah Guthrie and Hoda Kotb.

Normally the duo sits much closer together (something that isn’t practical due to social distancing during a pandemic) with the vertical LED video column between them.

Since returning multiple anchors to the studio, they have been seated farther apart at the very edges of the anchor desk until the network replaced the glass top with a much bigger version in August 2020.

By moving the other monitor, which is wider thanks to its landscape orientation, the show is able to “fill” the space between the pair a bit better.

In addition to that change, viewers may have noticed that a video wall is now covering the “Orange Room” a small alcove of the studio originally meant as a social media area.

That video wall is actually left over from the election set but has been moved to a different location in Studio 1A, according to NBC insiders.

For election week, NBC opted to cover Studio 1A’s windows for safety and security reasons and added the additional video wall, capped with a monochrome “Decision 2020” logo, near the area normally occupied by the “Today” sunrise logo sculpture. This essentially jutted diagonally through the studio and mostly cut off the video wall and “production area” used for election coverage from the “Today” home base and the Orange Room (NBC did use the home base area, sans anchor desk and with coverings over the windows, as an augmented reality “stage” during election coverage).

Now, with the logo traded out for the “Today” one, the video wall has been relocated to essentially cover the Orange Room.

When asked about the future of the Orange Room, a NewscastStudio source indicated it won’t exist in the same format going forward.

On Nov. 10, 2020’s “Today,” NBC News White House correspondent Kristen Welker was in studio and stood in front of the video wall to intro her package and then back to Guthrie and Kotb.

This included quasi-reverse toss shot  illustrated how the video wall could be ideal for tossing to correspondents in the field — something the show would add Nov. 11, 2020 — or serving as a backdrop for the “in the round” style configuration typically used in the second hour of “Today.”

The additional video wall could also become a canvas for graphics captured using a floating “walk and wander” shot either on its own or including talent at the desk in the shot. Other possibilities including using it in conjunction with its 40-foot curved neighbor or as a sort of Orange Room “replacement” display social media or video call feeds.

Nov. 11’s edition also saw Dylan Dreyer, filling in for Al Roker, start to use the video wall as a weather forecasting area.

Also Nov. 11, the show removed the movable video monitor from behind the anchor desk and reverted to just using the LED column.