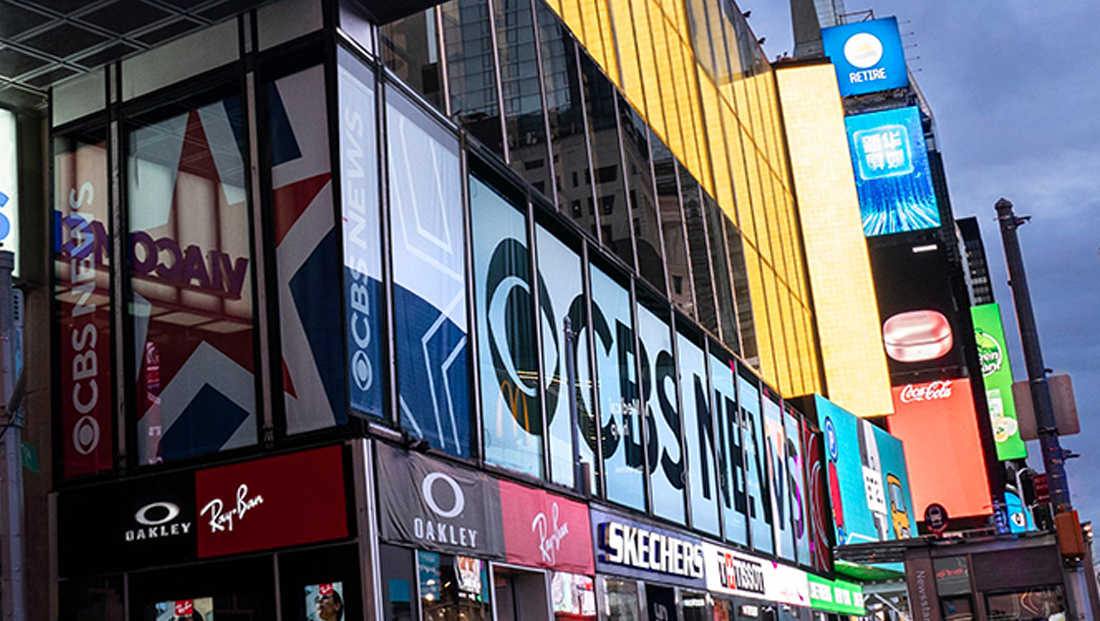 CBS News execs are reportedly discussing turning the Times Square studio space used during the network’s 2020 election coverage into a permanent home for “CBS This Morning,” Variety was first to report.

Variety sources stress that the possibility of a move has not gone far beyond initial discussions internally — and there are some logistically issues that would need to be considered before such a move could be made.’

The studio, located on the mezzanine level of One Astor Plaza, which is the corporate headquarters for ViacomCBS, was previously subdivided into three spaces used mainly by MTV, including its iconic “Total Request Live.”

CBS was able to use the space during the 2020 election cycle thanks to the fact it was reunited with Viacom in December 2019, meaning the property shared and the network had the same corporate parent.

For the election CBS took over most of the space with a set inspired by the studio of “CBS Evening News” in Washington, D.C.

“This Morning” also used the space for a few days surrounding election day.

The network covered most of the windows and simulated views of Times Square that were digitally altered with its own branding elements and realtime data graphics.

It’s worth noting that a move to Times Square would make “This Morning” neighbors (albeit not next door) with ABC News’ “Good Morning America,” which originates from the corner of Broadway and West 44th Street.

ViacomCBS’s building is one block northwest of ABC’s.

ABC parent Disney opened the Times Square Studios (its legal name) in 1999 with “Good Morning America” as the showcase production.

At the time, many compared to the move as a response to NBC News‘ revival of the windowed studio for rival “Today” in 1994.

The original design included a primary anchor desk and “living room” style interview sets on the second floor, all with windows overlooking the square.

In its original format, the studio only had a small portion at ground level and used the space primarily for weather and lighter segments and the space was designed to mimic a subway station.

The thick windows looking into the space could also be moved out of the way, creating an “open air” studio of sorts that allowed for crowds to gather and audience participation.

“GMA” would eventually relocate its home base to street level and rely less and less on showcasing the glass windows behind anchors.

The network would also take over neighboring retail stores as leases expired to expand the amount of space on the main level — a move that also created a bit of a maze like environment thanks to the phased construction and structural supports that couldn’t be removed.

In 2017, the network shifted home base to use one of the windowed walls, though much of it was covered by a large LED panel.

Then, in April 2019, the main floor area was almost completely redesigned, moving home base to an interior wall.

The studio’s upper level was renovated in 2016 to feature a new, flexible space with room for a studio audience. It is used for select “GMA” segments as well as for the now canceled talk show “Strahan, Sara and Keke” née “GMA Day” and “Strahan & Sara.”

It is currently used for New York editions of “This Week” and the daily replacement to “Strahan, Sara and Keke,” “GMA3: What You Need to Know” as well as “GMA” and other ABC News productions, including for past election coverage.

The second level’s windows have views of the ViacomCBS building, which also houses the theatre for Disney’s broadway adaptation of “The Lion King” and its bold yellow window graphics above the space CBS used for election night coverage.

The ViacomCBS logo on the side of the building also shows up behind anchors in select shots as well.

“CBS This Morning” technically already operates from a streetside studio at the broadcast center — though the location isn’t as popular of a tourist attraction as NBC’s Rockefeller Center or ABC’s Times Square locales.

Often wide shots of the “This Morning” studio show off two of the main glass spans — one camera left of the home base as shot at the top of each show and one behind a sliding “barn door” that is sometimes left open for an additional street view.

The predecessor of “This Morning,” “The Early Show,” broadcast from a streetside studio on the ground level of the General Motors building, which overlooked Grand Army Plaza and Central Park beyond.

When “This Morning” moved to West 57th street, plans originally called for more windows in the studio and adjacent newsroom, but the cost proved too much and the plan was mostly scrapped.

By moving to Times Square, CBS would be giving its morning show a more high profile location — which could perhaps be more of the impetus behind considering such a move.

The space also housed the network’s decision desk, so the need for “isolation” may have also been a factor.

If “This Morning” moved to Times Square, it could take advantage of the windows as both a backdrop for anchors as well as a publicity tool — such as installing LED panels or ribbons visible to passersby. Existing digital signage that normally displays advertising on the building was leveraged during election coverage.

That said, CBS has always billed “This Morning” as a “serious” alternative to other morning shows — producers were very proud of the fact the Studio 57 set doesn’t have a kitchen or sofa set.

Assuming “This Morning” stuck to this format, it seems probable that a move, if it even happened, would be more to take advantage of the prominent location.

It’s also worth noting that, if a move did take place, “CBS This Morning” would have a Disney production directly above it and another one just a block away.