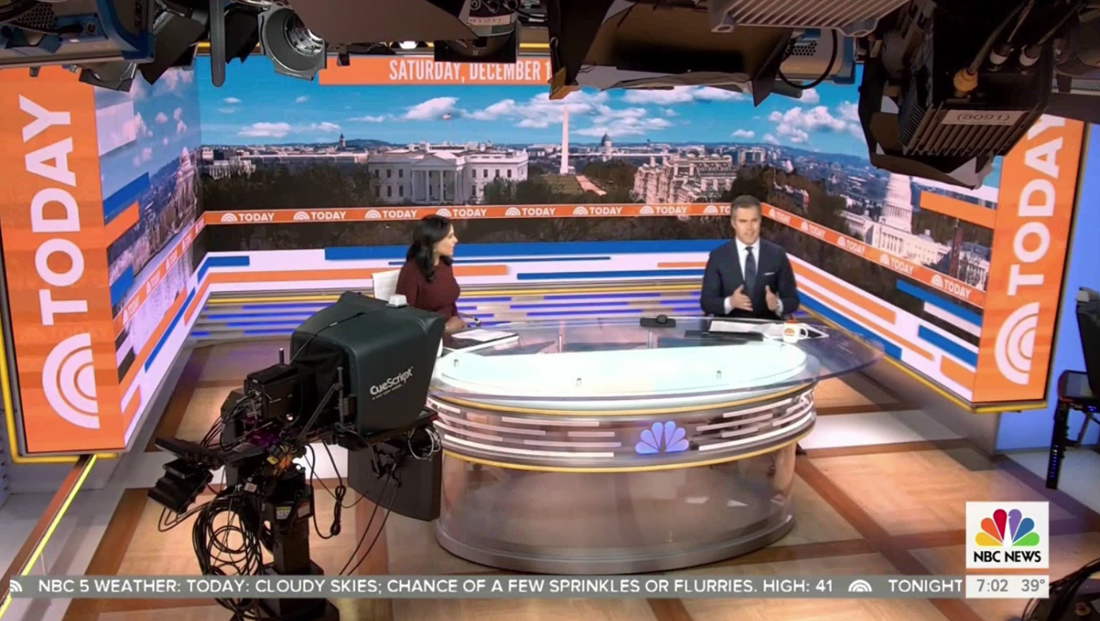 After a week’s delay due to one of its co-anchors exposure to coronavirus, the Saturday edition of NBC News‘ “Today” debuted from the network’s newly opened Studio N5 that debuted Dec. 12, 2020, along with two new MSNBC shows.

Sources told NewscastStudio that “Today” was scheduled to move in Dec. 12 as well, but after learning co-anchor Peter Alexander was in close proximity to someone who later tested positive to coronavirus while working at the White House, he was forced to anchor from home that day.

His co-anchor, Kristen Welker, was in Studio 1A in New York that day.

Alexander has since tested negative multiple times and the decision was made to move forward with having both anchors in studio — socially distanced of course — Dec. 19, 2020.

The show was set up using the studio’s larger, curved anchor desk positioned in the three sided video wall alcove with a stylized D.C. skyline serving as the primary background.

Portions of the image included accent bars and the “Today” logo in a colorful band — along with, for the opening push in, the date.

The studio’s color changing elements sported blue and yellow while a WRC forecaster, in for Dylan Dreyer, was positioned across the space and used one of the integration video screens to showcase her maps. 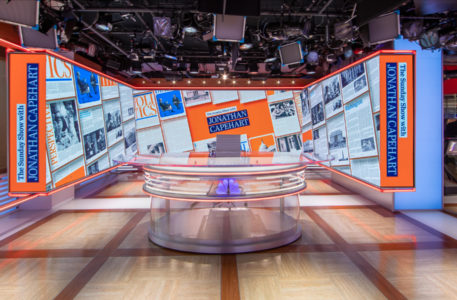 Studio N5 sports two real windows overlooking the Capitol dome and separated by a LED panel column — and while the show made a bit of a fuss about its “great view” Dec. 19, it didn’t actually originate any segments from in front of the windows — with them only showing up in beauty shots.

NBC News is a big fan of using video walls to recreate simulated and branded versions of real cityscapes and landmarks (such as the patriotic version of Rockefeller Center used behind election coverage), which could explain why the windows aren’t used more for “Weekend Today.”

Much like the large 40 foot video wall installed in Studio 1A in NYC, “Weekend Today” also used the studio’s video walls to showcase franchise graphics — perhaps most notably for the “Weekly Download” segment.

Using the windows would tie in the Saturday edition with the weekday ones by using real windows behind the anchors for most major two shots — and take better advantage of the proverbial “million dollar view.”

Studio N5 had been closed for nearly two years since a January 2019 fire heavily damaged what had been the network’s ancillary studios in a low rise office building near the Capitol.

Later that year, NBC announced plans to lease more space inside the building and move its network bureau and production facilities out of the longtime home of WRC.

This included re-opening an expanded version of N5 on the 8th floor and adding a studio on the 7th floor — which has yet to be officially assigned a use.

The network is also working on Studio N1 on the ground level as the permanent home of “Meet the Press.”

It previously opened its bureau flashcam position on the 7th floor.

When Welker and Alexander debuted as co-anchors, they would travel to New York and anchor from the weekday “Today” studio.

Shortly after the start of the coronavirus pandemic, the show shifted production to the “Meet the Press” studio that was also being used for D.C. based programs on MSNBC since the fire, at least partially as a way to cut down on travel and help aid limiting access to Studio 1A.

From 1989 to 1991, weekend editions of “Today” originated from Washington in order to accommodate co-anchor Garrick Utley’s other role as moderator of “Meet the Press.”

NBC has produced a distinctly branded and formatted version of “Today” called “Sunday Today” anchored by Willie Geist from New York City since 2016 so the two anchor format used Saturdays from Washington, D.C., only appears once a week.