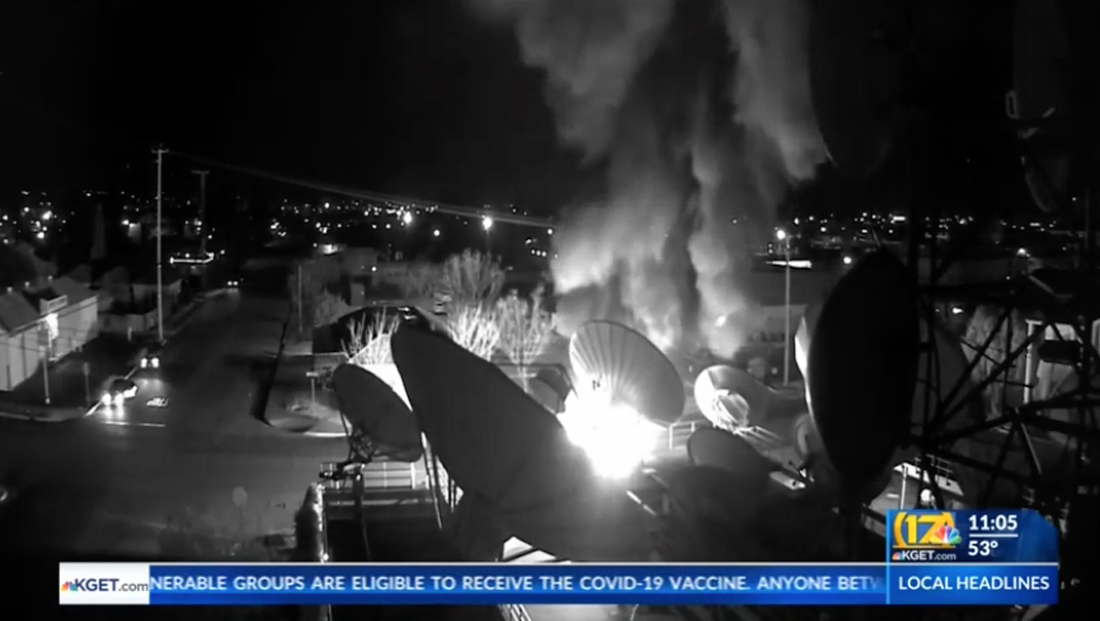 A woman was arrested by Bakersfield, California, law enforcement after allegedly intentionally setting a car fire outside the studios of NBC affiliate KGET the night of Sunday, March 21, 2021.

The Nexstar owned station had just started its 11 p.m. newscast when the first reports came in and evacuated the building as a precaution, reporting it on air at 11:05 p.m. local time in what appeared to be meant as a weather update. No talent appeared on camera during the brief report.

The station was able to pull up a feed from a camera perched above the station showing a bright burst of light and smoke billowing up behind its satellite dish farm.

Station employees evacuating reported seeing 13 large wooden crosses outside the station’s parking lot gate. Two of them appeared to be covered in wedding gowns with a third bearing a men’s suit jacket, though it wasn’t immediately clear if they were connected to the fire or what their significance might be.

It was estimated flames shot 20 feet in the air and several explosions were heard by a police officer in the vicinity leading up to the discovery of the blaze, though those were not confirmed immediately.

An investigation is still ongoing and police are seeking tips from anyone who might have information about the incident.

Police later announced a 40-year-old woman named Amber Hernandez had been arrested for what it deemed the “intentional” fire and is being held on $10,000 bail with a court appearance set for Wednesday, March 24, 2021.

No damage was reported to the building and the station is back to normal operations.